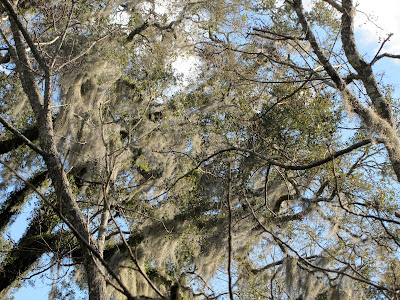 Every night the old Spaniards knit their beards in the darkness
They speak to each other as the old gnarled fingers work at their chins
Twigs flying as they work and
They speak of great cities they remember
Seville, Madrid, Valencia and so on.
They speak of streets they walked down which all somehow lead to the sea
Where great ships waited to take them across
To a different land where their feet touched white beach sand,
Black jungle dirt, swampy grasses growing like lakes forever and always as far as the eye could see.
They speak of the days they road huge white horses through the strange land
Which stretched so far their beards grew and grew as they rode,
And when they died (remember when we died? they ask, deep, old man chortles coming out of their throats)
They stayed where they fell of disease or hunger or the spears of an another kind of men,
and their comrades rode on
Some to cross the sea back to the streets of Spain
But not these men who knit their beards every night
In the trees
Great cypress trees, older than Christ would be if he were still alive,
Great oaks, older than fifteen saints,
Tiny dogwoods, younger than they were when they first saw the ocean
Their eyes still brown before the sun bleached them to palest blue
When their hair was still black
Before the years bleached it to mossy gray.

And they knit, they knit
They talk, they laugh
Remember? They ask
Ah, si, they sigh
The sighs tangling in the branches, in their beards
As the night moves on, inky like their hair once was
Until the dawn begins and pale light begins to paint
The east and they yawn and throw away their twigs 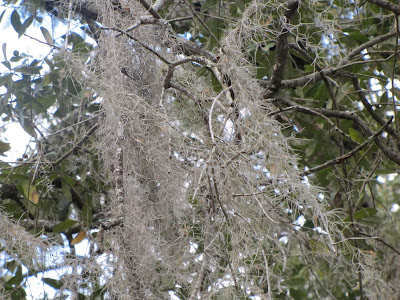 And cut the ends of their knitting, making sharp points of it everywhere
And they fade back into the trees themselves
And leave their work out for anyone to see
Anyone at all
Even me
As the sun takes over and daylight travels from east to west as they once did
They rest, they sleep, they turn in their slumber in the trees, great ones and small
Old ones and young
Depending on where they were when they died, perhaps
I do not know if they can still travel
But I know this-
They knit their beards every night and grow them again every day
As their snores rumble quietly, trembling the knitting
They did the night before, the leaves, too
And when the sun sets they take up their twigs again and work them in their beards
And they take up their conversation where they left off 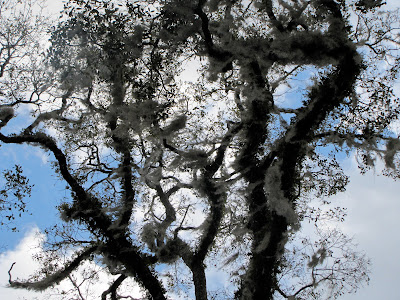