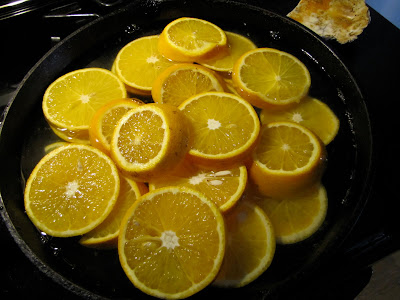 My house smells like heaven right now because I am making Ms. Allegra's Moroccan oranges. Earlier in the day I bought organic Florida oranges and washed them and sliced them and put them in the big iron skillet I've had since Girl Scouts and simmered them until tender-firm. Now they are simmering in a syrup made of sugar and honey with cloves and cinnamon sticks. Thus- heavenly-smelling house.

It's been a rather heavenly day, although I am a bit sick. My eyes feel weird, I took a nap and woke up from a dream where my hips were hurting so badly that I could barely walk to find that the position I was in WAS causing my hips to hurt horribly. But beyond that, I am fine. A little congestion, nothing much. And this sort-of-sickness has given me permission to be lazy and I have tried very hard to kick the guilt to the curb. I can't really be sick anyway. Owen is coming tomorrow morning at six a.m. and that is that. And so I have done nothing much more than go to the store, make the oranges, go out and visit the chickens and work on Owen's chicken. And take that nap. Oh yes. That nap.

The chickens broke out of the coop today. The latch had come out of the door of the hen house and I thought I had it barricaded with a shovel but between their mighty efforts (can you just see Elvis gathering the hens around him to help push yelling, "Come on girls! Heave away and we shall be free!"?) and the wind which probably knocked the shovel over and blew the door open, they got out. I worried about the garden and the tender plants there but seeing them all out in the sun and in the grass, scratching and making dirt nests to lay in to expose their fluffy butt feathers to the sun made it all worth while. Here's Elvis, his beautiful black-green iridescent tail feathers being blown in the strong wind we were having: 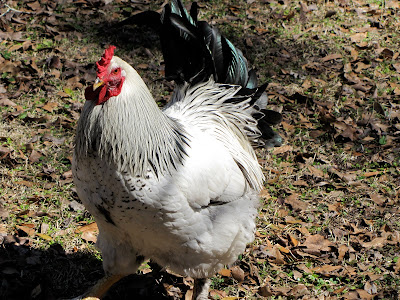 The train went by while I was outside and I know I've talked about the train before but I don't know if you realize just how close it is. If you click on this picture, you can see it right behind the chicken coop: 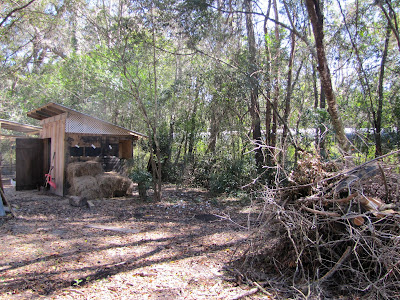 I wonder if the engineer of that train looks out to see our house, our chickens, our world as he goes by. What do we look like from his perch as he travels through the woods and fields of North Florida, clickity, click, clicking on the tracks? Do we look like a place stuck in a time from long-ago? I rather hope so. I do. The train shakes the house and rattles the windows in it and soon enough Owen will run outside to see it when he hears the warning whistle blow. Boys love trains. Probably another reason my grandmother-to-be-brain wanted to buy this place six years ago. 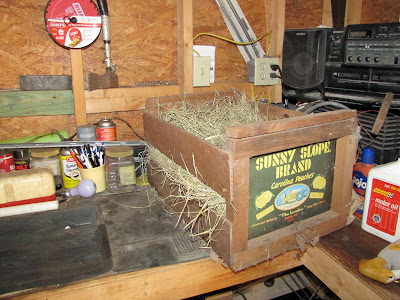 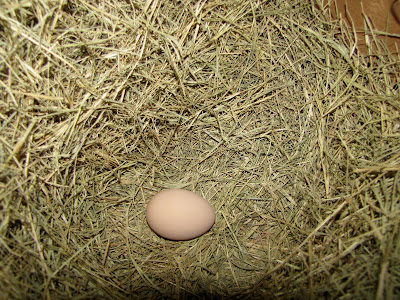 Every day that hen lays us an egg. Every day.

There was a sadness in this day. I got the news that Jan's daddy, Mr. George, had died last night. He was eighty-seven and a beautiful old man. Last year he was still strong and well enough to come to all of our plays and he always dressed so beautifully. Coat and tie and his white hair combed so neatly, so nicely on his handsome head. He was dignified. Do you hear that? Dignified. You don't meet so many dignified people these days so when you do, you recognize the quality and he had it in spades! What a life he lived, Mr. George! And I will never forget the picture I have in my mind of tiny Jan looking up at her daddy last year, trying to tell him something, and the love he had in his eyes for his little girl. Jan has been through so much in the past month or so. And now this. Today is the three year anniversary of the day her mama died, so there you go. She is fine, she tells me. And I know she is. But I also know this has to be hard for her, no matter how much of a relief her daddy's death was for him. He had dwindled so in the past few months and then he had a stroke, and then, three years almost to the day after his wife died, he went on too.
So it wasn't so much a sadness as a profound shift in the windy day but it was a day for that. When I got up, the sky was gray and by the time the sun set, there wasn't a cloud to be seen, despite the wind, despite the chill.

I think the oranges are done. I shall go tong them out, as Ms. Allegra recommends and eat some supper. Mr. Moon, who is almost well, has gone to a basketball game. And I will probably go to bed soon after my supper in order to be ready for Owen's early arrival.

One more picture. This is of the begonia which is happily wintering inside in my mud room. The blossoms are tiny and they reach for the light and every time I pass by them I am grateful for their small pink beauty, their reminder of our need for light and our ability to find it. 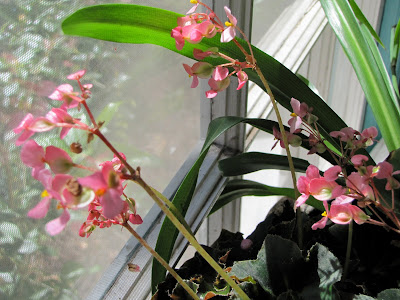 Our ability to thrive and blossom, even in the cold days of winter if given protection and a little water and a window. Even if the ground shakes when the train passes by. Even if the wind blows and the sun hides sometimes. Even if we get sick. Even if sorrows mount.

We can simmer oranges with honey and cloves. We can reach for the light, we can let ourselves rest, we can take the baby into our arms and hold him close. We can lie under the covers with our love for an afternoon nap of healing and we can take each of these small things and add them up to something so large that it fills us and shapes us and grants us the boon of life.