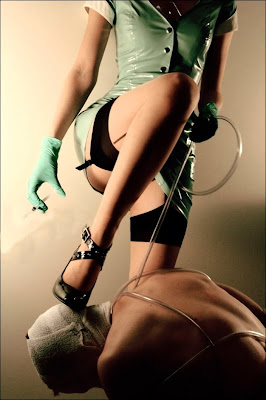 Jesus. Who knew? I mean, I always knew I wanted to be a writer but instead of spending my young life doing something that people would want to read about, such as whipping people I had tied up and masked and driving them into a sexual frenzy, I have wasted my entire life doing such amazingly boring things that no publisher worth her salt and salary would give anything I write a second glance. I mean really- who DOESN'T raise children? Who DOESN'T make soup? Who DOESN'T ENJOY SPRING FOR FUCK'S SAKE???!!!

So what? Big deal.

No big book deal, I'll tell you that right now.

But if I had just been smart and put my good-looking legs to use in a pair of fishnet stockings, I could be a published author now instead of a woman who sits on her back porch in a pair of overalls and writes about cardinals and azaleas and gay rights and hypocritical politicians and religion and the joys of being a grandmother. For no money at all. None.

Look- I could have done it. I have a screwed-up background. I had huge issues with men and I am nurturing. I have a strong right arm and could certainly have learned to crack a whip and oh, hell, I don't know what dominatrix women do. Yell a lot? Yes! I can do that! I have a very good voice which projects so well that I get kudos from elderly men after the plays I'm in because they could hear every word I said! I could attach nipple clamps. I swear, I could. I could, oh, hell, I don't even want to talk about it but I could. I swear, I could have! I could have been a contenda!

But no. I had to go and be a peace-loving, tree-hugging, back-to-the-land hippie and make my own bread and try to figure out sex one relationship at a time and sacrifice my breasts up to nursing my children. WHAT WAS I THINKING?

I don't know. I guess I was thinking that this was the life I was meant for. I guess I was stuck in the sticky old south where it's so damn hot that the idea of whipping someone's buttocks just seems like too much work. I guess the stupid old-lady yard-work gene kicked into action and I had more interest in buying pruners than lace-up, high-heeled, thigh-high leather boots. I guess my womb was too insistent and my desire to create the family I never had was just too strong.

Ah-lah, as I am apt to say. I will probably never be published and I will tell you right now that I am too old to put on thigh-high boots with stiletto heels and wobble around a dungeon in New York City and abuse men for money to get material to write about.

No. I'm stuck here in Lloyd and I'm never going to get a six-figure advance but that's probably okay. Do have any idea how much fun it is to loll around on a pink comforter in your daughter's back yard with two of your other daughters and play with two babies, one of whom is your grandson? I'll bet you any amount of money it's more fun than beating the hell out of some guy for the big bucks. Do you know how sweet it is to see your daughter laying in the sun, giving your grandson nursies and listening to your children laugh about things that happened when they were children? Can you imagine what it's like to see your grandson's hair stick up like chicken down and shine in the spring light or to take off his diaper and set him down on the comforter to see watch his darling butt as he tries to crawl?

Could a book deal be better than that? 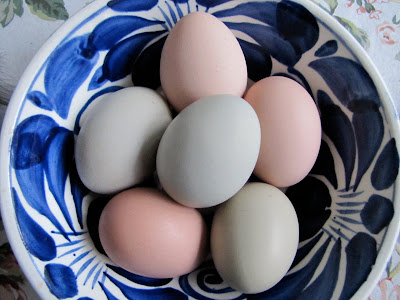 or taking a nice picture of a Bradford Pear's blossom that is opening in your own backyard. 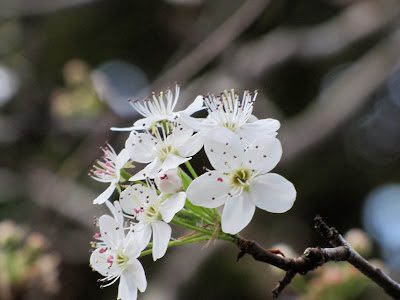 I'm not saying that Melissa Febo's time was wasted. Hell no. She can probably still do all of the things she's done and still manage to have some babies and watch them grow up if she wants to.
And I'm certainly not saying that a woman doesn't have the right to use her body and her mind to fulfill men's sexual fantasies for money. Not at all. Because that is a service industry and a good prostitute does as much good in this world, for my money, as a good anything. If she can do the work and keep her soul and sense of humor, then I am certainly not casting a stone. And if she can then produce a well-written book about it, then bless her heart.

But somewhere, deep inside of me, there's a tiny small voice that says, "You had the legs, baby. You coulda done it." And I'm going to smile and disagree politely. I'm going to go eat the really spicy soup I've made. I'm going to gently rub lotion on the part of my husband's back that he can't reach where his dry skin is itching him. I'm going to worship baby bottoms and change baby diapers instead of putting grown men in diapers and boy, am I glad about that!

And then I'm going to say, "Thank every Higher Power that is."

And tomorrow I'm going to take care of my grandson while his mama, who is my baby, is at work.
And I may be stupid but I am not dumb. Which is something my mother used to say. Or maybe she said I may be dumb but I am not stupid. I don't know. Either way.

And I will probably write about it, whatever happens.

And you can count on the fact that whatever it is that happens, none of it will involve a whip. Unless I decide to make meringues.
In which case I will carefully separate egg yolks from whites and I will whip the holy hell out of them until they stand up and pay attention.

I might even put chocolate chips in those bad boys.
Giardelli.

You excited yet?
I know I am.

And still I won't get a book deal.

Labels: dominatrices, I heard it on NPR