When Your Soul Is In The Lost And Found

That black dog loosened his grip a bit today and thank goodness. I felt pretty ragged this morning but just kept on going with life and eventually things evened out.

This boy came over with his Boppy after T-Ball. 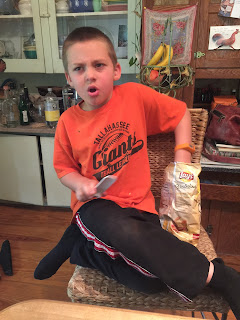 That boy and I can talk about everything. I just love him to pieces. He lets me show him all the stuff like what's growing in the garden and the little figlets on the tree and he wants to eat mulberries and carrots and peas and feed stuff to the chickens. I even showed him the blooming magnolia and when he smelled it, he said, "Now I know why Magnolia is named Magnolia."
Uh-huh.
He said today, "Mer, there is always something new at your house."
He is right.
He came up with three names for the baby chicks and I think they are good names. He's an excellent and experienced chick-namer. The names he came up with are Rosabelle, Lucy, and Georgiebelle.
He also advised me that Luke Skywalker would be a good name for a rooster and I tend to agree with him. We'd be breaking away from the musician mode, but it's a damn fine rooster name.
We'll just see what we get and go from there.

I did four loads of laundry and hung them all on the line. It's perfect drying weather here right now. I went to Publix and bought a small amount of shrimp and scallops to mix with some of the sea bass Mr. Moon caught into a ceviche. Also a bunch of limes. I came home and peeled and chopped and squeezed and mixed and this is what it looks like. 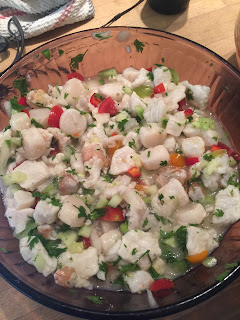 Garlic, onions, cucumber, cilantro, salt, pepper, lime juice, a few chopped tomatoes, a few spicy chopped peppers. You want to talk all healthy and shit?
That's it, baby. Right there.
To further the deliciousness, I made a bowl of Ixnipec which is what the Mayans call their version of Pico de Gallo. Ixnipec translates as "dog snout" whereas Pico de Gallo is of course "rooster beak."
Don't ask me. I just love it. 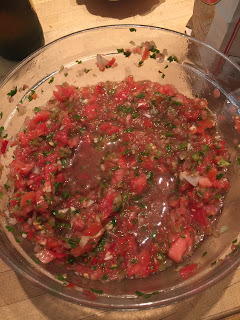 I cheated on that one because I chopped in the food processor so of course it's not anywhere near authentic but I was in a hurry because it was getting later and later and I hadn't set foot in the garden except to pick cilantro.

I finally got my overalls and shoes and gloves on and went out and got a few rows weeded, some things pulled that needed pulling. As I plucked the tiny planted-too-late arugula, my heart broke a little as the tang of them filled the air. Salads are going to suck around here until November when we can start picking our own again. I'm about to the point where I can't stand to buy any salad greens in the store except for Romaine because they all seem so sad and wilty and flavorless. Even the expensive organic ones.
I'm spoiled and I know it.

I'm listening to Carole King's autobiography (memoir? what's the difference?) right now and I am enjoying it. She reads the audio version herself and she certainly has a lot of stories to tell, not only about her life in the music industry in which she is a legend, but also her personal life. Married at seventeen, a successful song-writer and mother of two by the age of twenty-one...
Yeah.
The shocking part is that she was married to an abusive man for years and did not leave him. Emotional and physical abuse and you can tell it's very hard for her to talk about but it certainly sheds light on how such a thing could happen. She had every resource a woman could need to leave an abuser and yet...she didn't.
Just at the time she had decided that she would leave him and, in fact, had packed up her children and flown to Hawaii he overdosed, shooting cocaine and died.
The name of the book is Natural Woman. It's extremely interesting and a history of the times in which so many musicians flamed out, bright stars in the night sky but she had her children and an unbelievable work ethic to keep her grounded throughout those incredibly turbulent years.
And hey- she gets my undying respect for birthing a breech baby at home!

So that's it from me today. My yard still smells of the jasmine with the scent of the magnolia blooms underlying that perfume and I'm doing the best I can here in Paradise. I just chased that damn black and white feral cat away from where he was boldly standing right by the chicken coop observing my babies. I'm sure that's the cat that Maurice gets in fights with, probably protecting her turf.

All right. I'll shut the fuck up right now and give you this. If it doesn't make you get the shivers and then cry until you can't even talk, I don't know who you are.

God DAMN, but I am grateful for the fact that I grew up in a world where people like Carole King and Aretha Franklin lived on the same planet on which I lived at the same time and still do and then throw in Barack and Michelle Obama and well, it hasn't been all bad, has it?
Glory and gifts.
And a miracle or two as well. That's what happens when people use their powers for good. And some people have some mighty big powers.