Mostly Not Jackie Dip At All

One day a few weeks ago, Lily texted me from the dentist's chair. She referred to her teeth as being all Jackie Dip. She had meant to say Jacked Up but after auto correct took over, it came out as Jackie Dip, which is my new favorite descriptor for all things messed up.

Today is definitely NOT Jackie Dip. 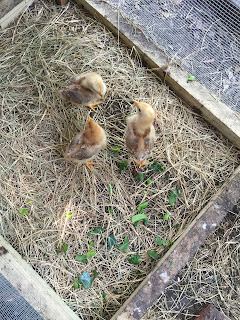 There's Teeny and Tiny and Tony. They spent the night outside in their safe little cozy coop and survived nicely. I gave them peas and kale for their breakfast treats.
I tried to get a picture of the teens but I swear to you- it's almost impossible. They are so busy. 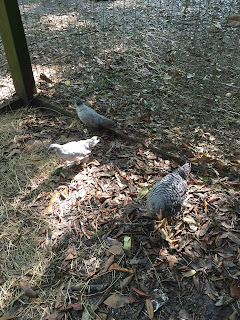 Maurice slept on me all night long. She obviously is more interested in me than she lets on. Every time I woke up in the night, there she was, cuddled up. And Jack came back. Of course. I tried to get a picture of him this morning but he and Maurice were playing a fierce game of jungle tag and every time I tried, they streaked off in mock warfare.
Lily's cat Rusty had disappeared for a few days but he's back now too. And Jessie reports that her cat Celo got in the shower with her last night, unwilling to be separated from her after her week's absence.
Cats just love to pretend that they don't give a shit about us but I have a sneaking suspicion that in fact, they do. They may not love us or adore us as dogs will, but we are an important part of their world, even if it's just that we represent regular doses of Friskies.

I've taken the trash and as I passed by my neighbor's house, I saw hens pecking away in his yard. Yay for the new neighbor guy! We are becoming quite the chicken community here. Sadly, my neighbor on the other side reports that her three peacock chicks which hatched have disappeared along with their foster mother. I hope they're okay. This is the mother hen who hatched my three babies. It can be a cruel world out there.

I'm going to hang clothes and take a walk and then get over to Lily's where I'm going to babysit for Magnolia and Gibson and go get Owen from school while Lily gets her new crown put on. A dental crown, not the gold and ruby crown she deserves, although the jeweled kind would probably cost less.

And so it goes in Lloyd today.