Last Night At The Beach

Oh my goodness. It's our last night at the beach and I am looking around this house and wondering how we're going to ever get out of here, short of using TNT. We have spread out in this place like fleas on a hound dog. Toys and food and clothes and towels and bathing suits and baby walkers and baby seats and baby carriers and baby feeding-devices, books, magazines and beach chairs, beach toys, beach tent, beach umbrella, beach cart...
And more booze than a band of Vandals could consume in a week.
And get this- check out time is 10:00 a.m.
Hahahahahahahahaha!

Oh well.
Somehow we will manage.

The whole gang has gone off for ice cream because that was on the check-list to do. I said I thought I'd just stay here because frankly, I didn't want ice cream and besides that, I haven't had four minutes to myself the entire week which has been fine and lovely but still. 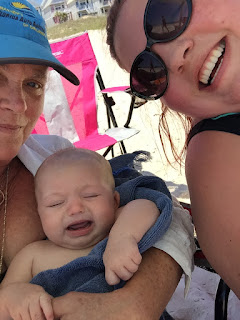 Here's a picture from the beach this afternoon. It is misleading in that Magpie doesn't cry that often. She was ready for her nap. She'd spent most of the beach time sitting on her mama and making smiles and goo-goo noises and being adored. August likes to eat sand and has been extremely entertained by that activity.

We did go out to breakfast this morning. There is ONE restaurant on the island which serves breakfast and let me tell you that you couldn't pay me fifty dollars an hour plus tips to work that shift there. It took us approximately three hours to finally get our food. Oh well. We're going to grill hamburgers tonight. Everyone is swearing that a diet is soon to be in order. We've been eating good food and bad food. There is broccoli in the refrigerator for tonight's supper but there's not enough broccoli in the world to make up for all of the chips and Cheetos we've been consuming.
La-di-dah. It's the beach.

The boys and men caught some more fish today and a nice pompano is going back to Lloyd with us. We also saw a snake in the dunes (it's now under the house) that we've never seen before. A coachwhip snake. We had to look it up. That sucker was at least five feet long and about as big around as my thumb. He was lovely, making his magical, silent, snake-way through the sand. Gibson wanted to "whack it with a spatula" but we told him that no, we would let it be.

Well, the ice-cream eaters are home. Here are Gibson's toenails which I painted for him today. 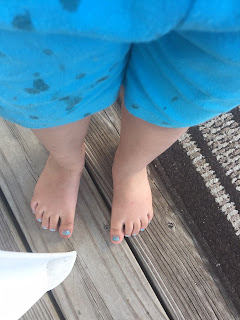 "What flavor ice-cream did you get?" I asked him.
"Chocate," he said.
I had sort of guessed that from the state of his shorts.

He asked me to take a picture of him holding the bucket of shells that he and his brother have found this week. 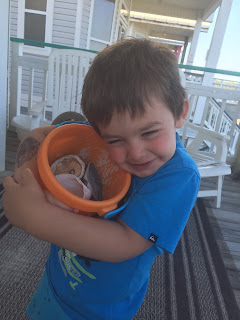 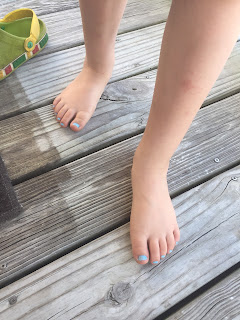 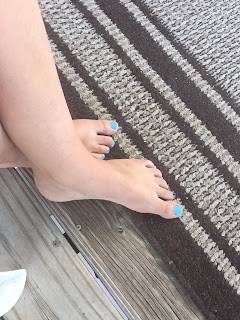 I asked Jason if he wanted to paint his toenails too. He said he didn't really want to.
"Well then, you aren't in the cool club," I told him.
"I'm cool with that," he said.
I'm not even asking Mr. Moon. Lily somehow hasn't gotten around to it either. 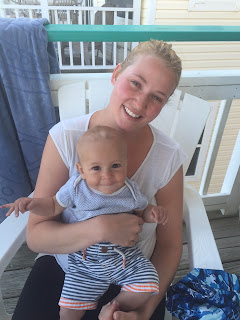 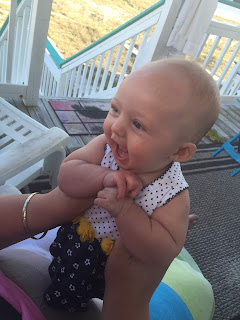 Very few tears, lots of smiles and laughing, baby kisses to infinity, pelicans and seagulls, dolphins and jet ski rescues. Good food, plenty of sleep, lots of reading with my eyes, snuggling with my man, naked baby butts, blue toenails, a wedding on the beach this morning.

And tomorrow I'll be back to my beloved Lloyd and the chickens and my cats and Gibson just told me, seemingly out of nowhere, "Whatever it takes is what it takes."

Our little sage who wants to whack snakes with spatulas and who is now peeing off the stairs.