I decided I was being ridiculous and I took a shower and put on real clothes and a bra-like garment and a tiny bit of make-up and drove to town where the memorial service was being held.
I did not do it for anyone but me because I knew that this would be an opportunity to see women I hadn't made contact with in forever and they were so important to me and my life and I did and it was right.

I got to see Ellen who was with me during my labor with Hank, forty years ago and who delivered May, whose name she carries as a middle name. I was with her when she had her daughter, Elise, who went on to compete in the Olympics as a gymnast. Ellen has since moved to Maryland where she worked for a private practice as a midwife after she got her Masters in Midwifery, went back to school, got all sorts of educated and taught at Hopkins for years until she tired of the academia and is back catching babies and loving it.

I got to see Erice who was also with me for Hank's labor and May's labor and who delivered Lily and also Jessie. She is also played in a band with my first husband for years.

And I got to see Jeanne, a woman I've known since, well...I can't even remember. I just know that she's one of the most beautiful and precious women on this earth.

Guess what? All three of those women are nurses. Or were nurses. Jeanne and Erice have retired and we got the bare minimum of time to exchange stories and pictures on our phones and I got to hear Erice sing with two other women I have known forever and if there is anything more beautiful than the blending of three human voices who have been singing together for most of their lives, I don't know what it is.
And Erice's granddaughter also sang and she has a voice that sent chills up my spine.

So yes. I am glad I went. And I was so right to put on the waterproof mascara.

We have, these four women and I, experienced births. We have experienced deaths. We were brave enough and foolish enough and wise enough to band together to help each other have our babies and to help other women have their babies at home back when hospitals barely allowed husbands to be in the delivery room, back when women were strapped to the delivery table for fear that we might touch ourselves or our newborns, thus contaminating the "sterile" field.

Sometimes I look back on those days and I can't believe we did that. But we did. We took Spiritual Midwifery as our guide and we ordered midwifery and obstetrics books from England by mail and devoured them like freshly baked loaves of bread and we were responsible and respectful and in our own small way, we changed some things.

And today I got to see those women. I got to hold on to them, I got to cry with them, I got to show them pictures of my grand babies and tell them about my daughters' own home births and here we all are.

Tonight Jessie's out here visiting her parents with August who has busted another tooth through and who can't get enough green beans to eat and I have made fish dip from the amberjack that Mr. Moon caught and smoked, and Jessie and I picked more beans and I am cooking them with some more potatoes dug from the garden and OH! MABEL LIVES! We found her under the deck and she has a puncture wound on her back but she seems okay. I fed her grapes by hand and gave her water and torn up pancakes and Trixie, her sister, was hanging out with her, singing her own Trixie song as she does.
I still think that damn cat attacked her and that somehow, she survived.

So there you go. 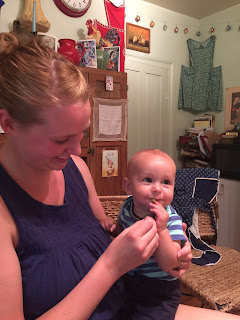 August eating green beans. He is starting to talk, y'all. The Da-Da-Da's are coming forth and I swear, he'll be speaking English in about a week.

I am as tired as a woman can be, but it's real, good, damn fine tired. And I did what I should have and I am glad.