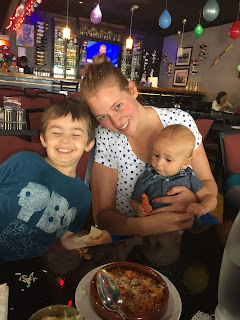 I am still boggling over that one a bit, especially as I haven't dressed up for Halloween in at least three decades.

Lily and Magnolia were waiting and we loaded up and headed to town where we met Jessie and August at the Persis. I got Gibson his food- rice, butter chicken, and fruit. Also some "orange drink" and I am not sure what that is but Gibson loves it. By the time I was ready to eat my food, he'd already finished his plate and wanted more. So we got it. I am having so much fun with that boy these days. He makes me laugh so hard with the things he says. When he was trying to buckle his seatbelt today I told him that he was very smart.
"And funny," he said.
It's true. And he's just such a little ray of sunshine.
Well, mostly. He is four years old, after all. 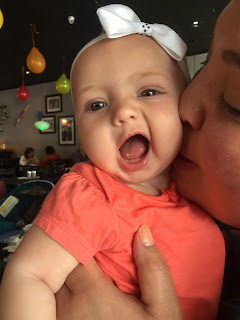 To go with her orange onesie, she was wearing pants with a tiny orange jaguar print. If that girl gets much cuter, the world will not be able to contain it all, not to mention that my heart is already bursting with her deliciousness.

We had a perfect meal, as always at Persis and when the server heard Gibson talk about the "orange dessert" which he loves but which was not on the buffet today, he brought out a dish of it, just for Gibson. I think it is cooked carrots with sugar and spices. I'm not sure but it is mighty fine. There's a picture of it in front of Gibson up there at the top. You can see August holding his raw, organic carrot looking with great longing at the dessert. In the approximately three weeks since he's started eating food, he is already quite certain that he wants ALL the food. Vergil, who is getting home on Wednesday from his almost three weeks kayaking down the Grand Canyon trip, is not going to believe how much his little boy has grown. Which leads me to the fact that in a few weeks, Jessie and Vergil are taking that boy up to Asheville for a few months.
I can barely stand the thought.
I mean, it's only fair. Little dude needs to get to spend time with his mountain kin which is a beautiful, wonderful family whom he deserves to have in his life and vice versa, and it's only fair that Vergil gets to hang out with his family and oldest friends and besides that- Asheville in the summer is far more tolerable than Tallahassee is, and, and, and...

How the hell am I going to stand it? I suppose there will be at least one trip to Asheville this summer.

Anyway, after lunch we went to Costco. Of course. I read "There's A Wocket In My Pocket" to Gibson as we shopped because he asked me to. I'm such a sucker. I bought a damn bathing suit at the Costco. Can you believe that? I didn't try it on because of course you can't. There's a pocket in the little skirt part which charmed me. I don't know what the hell I'd put in it. My room key when next we visit Cozumel? Maybe. Or perhaps a wocket. I still haven't tried it on but at least when I do, it'll be in the privacy of my own home and there will be no florescent lighting whatsoever.

So it has gone and when I dropped Lily and Gibson and Magnolia off at their house, Gibson ran up to the car as I was leaving. He had something else to tell me.
He said, "You coming back on Saturday?"
"I might," I said. "Or probably before then."
Then he began to rub my hair which was in a braid down my back.
"You head looks like an ant pile," he said, sending the white and gray hairs next to my scalp flying everywhere.
"Is that ugly?" I asked him.
"Yes," he said gravely.
"Oh well," I said. "I love you!"
"I love you too!" he said. And off I drove to come home and work in the garden a bit and take in the laundry and make up the bed with the fresh, crispy sheets where I will lay my ant pile head down tonight in great and luxurious delight.