"Memorial Day should be a day for putting flowers on graves and planting trees. Also, for destroying the weapons of death that endanger us more than they protect us, that waste our resources and threaten our children and grandchildren." Howard Zinn

This morning I struggled to write a post about Memorial Day and as happens sometimes, things just got murkier and murkier and the points I was trying to make got lost in the dusky haze of my words and I finally just deleted the whole damn thing. And then I read that quote on Facebook and I realized that that was exactly what I wanted to say.

So. There. That. Memorial Day.

I did not plant a tree today but I did have fun with some of my kids and their kids. Lily and Jessie came over with the babies and boys and in the first twenty minutes they were here, Owen and Gibson and I had gone out to see the young chickens, feed them bread, gathered eggs, come in and CRACKED eggs to cook which resulted in an eggsplosion (haha! right?) which THEN resulted in floor cleaning and Gibson taking a shower and finally, the cooking and eating of eggs.
And that was just part of it.

But soon, things had calmed down enough to look like this. 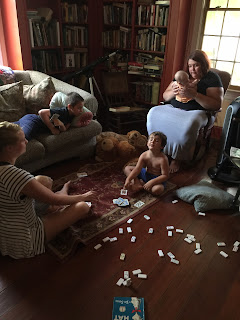 It was so much fun. We discussed many things such as my idea that if I deep-cleaned this entire house (except for the upstairs- do you think I'm stupid?) one room per day at a time, I could finish the whole house in about two weeks. That would include porches. Which, by the way, I did sweep today. Okay, I swept three of them. The kitchen porch could use my attention for about an hour and it's only about five feet by three feet.
You could make a blanket with all the spider webs by my kitchen door. I am not kidding you.
Lily listened to my idea and said, "You couldn't deep-clean this room in a day."
"Why not?" I asked her.
"You'd have to take all of these books and things off the shelves and dust each one and then clean the shelves. And that's before you cleaned the floor and mopped it."
I insisted that I could do all of that in one day. I mean, I have hundreds of books, not thousands.
This lead to me asking them if they were ever going to get all of their stuff out of the library. Like old yearbooks and college textbooks and notes and music stuff.
"But that's what a library's for!" said Ms. Jessie Moon Weatherford who still has an entire room upstairs filled with stuff.
Sigh.
No deep cleaning was done today. I assure you of that.

Somehow we moved from the library to the hallway. Perhaps the chaos of the clutter got to us. We sat on the floor and played with babies all afternoon. 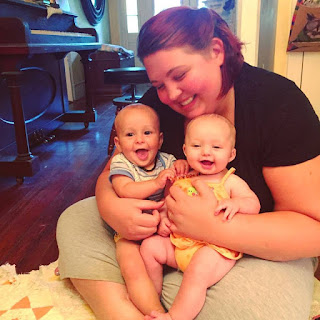 We laughed so much. It was ridiculous. August and Magnolia were obviously entertained as well. We discussed many things including PMS and how do we know if the real us is the one with the PMS attitude or the non-PMS attitude? and of course, I only spoke on the topic from memory, not present-day reality but listen- you never forget that shit.
Ever.
And I always think about St. Roseanne Barr's quote about PMS which was, "Women complain about PMS but I think of it as the only time of the month when I can be myself."
I remember wondering at one point, as I was going through menopause, whether I would be left in a state of eternal and constant PMS or the other fairly loving, far-more-contented side of the hormonal fence.
I still don't really know. All I know is that now I can't blame my crazy on being premenstrual anymore. I can't tell my husband that I'm so sorry for whatever the fuck I just said and blame it on the fact that I'm just about to start my period.
Let me just say it's a good thing I'm a fairly decent cook.

While we were in the hallway, Owen came in and announced that he was giving foot massages for fifty cents.
Jessie and I immediately signed up. Here's a picture I stole from Jessie, also off of Facebook. 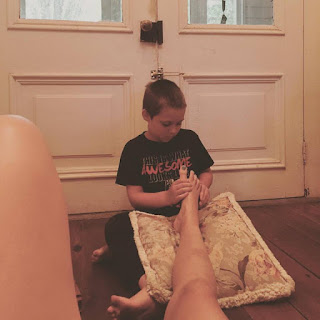 Those are her feet and legs. She and I both still have our beach-blue toenails.
Owen's massage was totally worth fifty cents and I tipped him an extra quarter.

August is crawling all over the place and pulling up and trying to bite electrical cords.
i.e. You can't take your eyes off of him for a second.
Maggie is just about to sit up by herself and tried a crawling maneuver which freaked her out a little bit and made her cry but we were very proud of her. That girl loves to be sung to, even by old Mer with her croaky old voice. She smiles and laughs and if she is laughing at me and my silly songs, that is fine with me and I kiss her neck and make her laugh even more and my life is complete.

Mr. Moon came and packed and got his snack bag and kissed and hugged and received kisses and hugs and hit the road to Orlando. I made popcorn for him and popcorn for us and Jason called to say that he'd gotten home from work and was trying to locate his family because he thought maybe they'd been raptured.

No one was raptured. We were all just here, enraptured, perhaps, and giggling like middle-schoolers.

Lily and Jessie packed up the babies and the boys while Gibson pleaded to have a tea-party with me. I promised him a tea party for sure next visit and I walked out and kissed every one of them before they left and then came in and tidied up.

So that was my Memorial Day. I didn't decorate a grave, I didn't plant a tree, but I sure did love on some babies. I didn't destroy any weapons of death but I did have a conversation with Owen about how sometimes things are so beautiful that they make you cry.
He knew what I was talking about.

Time to put the chickens to bed.