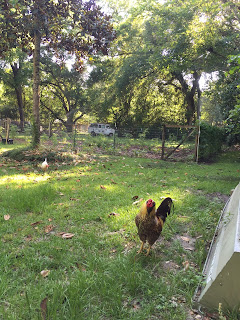 Well, as you can see we are home in Lloyd now and it was a very nice weekend away and as always, I am happy to be here although after being in the extremely tidy and uncluttered old house where we stayed, I am in despair at the disarray and clutter and dirt in my own house.
So of course I worked outside where the dirt and poop is supposed to be and in fact I dealt with dirt and poop to the betterment of my garden and also to the chickens and goats next door who received a nice bunch of wormy kale which I have finally and at last, pulled entirely.
I spread out composted chicken shit and pulled a few weeds and picked some green beans and fertilized the tomatoes and peppers and squash and as I did all of these things, I thought about the couple we met this morning on the front porch of the guest house where we were all staying.
It's always so odd to me- this artificial throwing-together of people in places where they are all taking accommodation and which is why I avoid B&B's. I am not worth talking to before I've had my coffee and trying to make small talk with strangers in such situations is not relaxing to me in the least but this was a little different in that we were all on the porch and they had their coffee pot from up in their room and we had our coffee pot from the kitchen and we were outside, as it were, and not trapped in some overdone dining room with the smell of scrambled eggs and muffins assaulting us before I was ready.
I do like to meet new people. I truly do. It's interesting. For someone who is as agoraphobic as I am, it's a little strange that nothing makes me more curious than contemplating the lives of others. And I had done so with this couple.
We had met briefly when I let them in when they arrived on Saturday and had crossed paths but that was all. This morning we actually spoke though. He is obviously older than she is and it turns out that she's from Canada and he is from the U.S.,  somewhere in the south and they live in Atlanta now. When we first began talking, I decided that he was a bit of a blow-hard and that she was far more intelligent than I had assumed. And far more intelligent than he, for that matter, but she seemed to be somewhat reserved, a little nervous, but friendly all the same.
We discussed this and that- mostly his work and Apalachicola and the little calico cat who lives on the porch and then we drifted into politics and he was the one who brought up Trump and we all agreed that he's a scary son-of-a-bitch but the man we were talking to has accepted that he might be an alright president because he'll just hire people who are really good at things to actually run the country.
I said something like, "I doubt it. He's not even a good business man. How many times has he gone bankrupt?"
And the woman said, "Ten that I know of."
"Well, anything's better than that president we have now," said the guy and I felt Mr. Moon tense up because he KNOWS I not only adore our president with all of my heart but that I am also not loathe to speak my mind.
I took a deep breath and decided not to get into the bloodshed portion of such a beautiful morning so quickly and then the other woman said, "I love Bernie!" and I said, "Oh! I do too!" and we were off on that tangent and I did say, "I am extremely liberal," and I said it in such a way that I assumed Mr. Talk-Talk knew exactly what I meant and after that we mostly just discussed where to get breakfast and then we all wished each other well and went off on our separate ways.

So I've been thinking about this all day long, not in any sort of very negative way, but just wondering how in the world a woman like that can be with a man like that.
She told me that she grew up on the coast and loved pulling in mussels and clams and fish and that she loves the water so much, the ocean, the sea. Her eyes lit up as she told me about it and I saw the little child in her, living in a tiny town in Nova Scotia and I told her about how I grew up in a tiny fishing village too and I felt a sort of bond with her.
I hope she is okay. I hope that the man she's with treats her well and with respect. One never knows. He mentioned children from a former marriage and they mentioned a dog they have and it is easy to imagine their life together- she a sort of trophy girlfriend, he the Talk-Talk Man who seemed to be proud of the fact that he collects speeding tickets the way way some people collect art. She's so far away from home. I wonder what she sees in him? She was a pretty woman, but so very thin, and had a nervous habit of pulling at her very blonde hair and has had those lip injections that made her look as if it must be difficult to eat, and thus I assume that she may have issues with self-esteem.
Who knows? Not me. I am not a psychologist but human behavior does interest me to no end and I am endlessly curious about the subject.
As Yoko Ono said, "Everyone has a story to tell."
And it's true. And almost all of them are fascinating.

So here I am home in my life and going about the things I go about here- chickens and garden and yard and catching up with children but I tell you something- I am going to be thinking about that woman for quite some time.

Last night before we went to sleep, as the itching in my feet finally calmed, I went down the hallway to pee and found her, squatting on her heels before the bookshelf where there were books and movies for guests to borrow. I was in my old-lady white cotton nightgown and she was in one of her tiny clingy dresses and we exchanged a few words about how much we loved this old house, how comfortable it was, and wished each other a good-night.
That image is going to stay with me. Her vulnerability somehow in the hallway as she crouched like a child. I felt, for once, no desire to be her age again, to be young again, but grateful with my sturdy older self, my graying hair flying loose, my good husband waiting for me in the bed after he'd gone out to buy me Benadryl and cookies. Simply glad to be who I was, where I was, both in space and in time.

And I still do. And I wish her well.