When You Have One Plan And The Universe Has Another. (Not That I Believe Any Of That)

I knew I should not have gone out into the world. I knew it! But I figured it was safe to walk down to the Post Office. Right? That's like one block away if we had blocks in Lloyd, which we do not.
But I wanted to check the mail and also, my across-the-street neighbor texted me that he had bought too much Romaine lettuce and did I want some and I texted back that sure, I did, and that I'd stop on my way back from my stroll to the Post Office.
When I got to the corner I saw that a church was selling mullet dinners and I asked them how much and they said seven dollars and I said I'd be back and then went to check my mail and then by Paul's and we stood and chatted in his yard for a bit (mostly about how much our hips hurt and how aging just purely sucks because we are aging) and I guess I didn't realize it but I must have been bitten three times by a yellow fly because by the time I came home, got my money for the mullet dinner and went back and was waiting on my mullet to fry, I had three places on my own personal body that were itching like motherfucking hell and nothing itches like a yellow fly bite.
I had a pleasant time talking with the young people who were at the mullet dinner set-up while the older lady did the actual mullet-frying about astrology, of all things, plus a few other things and by the time I got home with my styrofoam take-out container, I knew it was time to hit the Benadryl. Which I did.
Both topical and a pill.
The mullet dinner was, I have to say, disappointing. 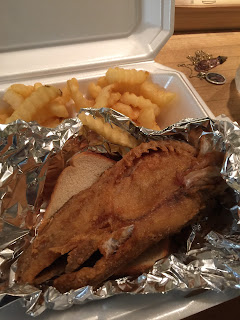 First off- no cole slaw. Secondly- frozen french fries instead of cheese grits?
What kind of church was that? I did ask what church it was and they told me and I asked, "Where is that?" and that lady said, "Down the road," which did not clear up a damn thing in that there are approximately twenty-eight churches down the road from here. I acted like I knew what she meant though.
Anyway, not only was there no slaw and no cheese grits (or grits of any kind), the mullet was not the best mullet I ever ate. I am thinking it was caught yesterday or the day before and that would be fine for most fish but if you know anything about mullet, you will know that unless it goes from water to plate within a short few hours, it isn't very good whereas if it is cooked and served a few hours after it's caught, it is the most divine white meat on the planet.

This mullet was not divine. And what can you say about frozen french fries? Oh well, I donated my seven bucks to the cause of summer activities for a church and therefore, I did my job. Also, my chickens got some nice mullet and white bread and french fries. Which they loved. 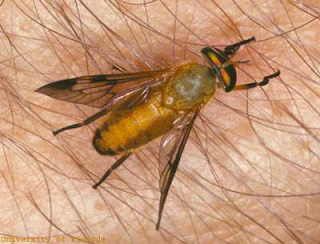 (Picture stollen from the internet because hell, no, I am not letting one of these horrors stay on me long enough to take a photo.)

Bigger than a mosquito and smaller than a horsefly. And they can draw blood when they bite.

Even though I had taken the Benadryl and used the cream on my bites, they became an itchy hell. Plus, swollen up. Here's a picture I took and sent to Jessie (because you have to do this- send pictures to someone of your swollen yellow fly bites, right?) of my hand. 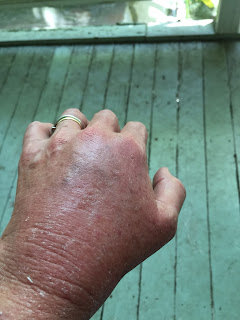 My feet weren't quite as bad but just as itchy. I contemplated taking another Benadryl when I started feeling the sleepy/slightly stoned effects of it and the bites were still driving me crazy but decided against that because this is a process and it just has to work itself out.
So I cleaned out the hen house and yes, the baby chicks had flown the coop (so to speak) and the teenager chickens were now in there, eating all the baby chicks' food.
And then I decided to take a nap (sleepy and slightly stoned as I was) and let time have its way with me and so I did and my feet bites look a lot better and are not itching and my hand bite isn't itching but it looks like when you take one of those rubber doctor gloves and either blow it up or fill it with water and it's so funny like a cartoon hand which is somewhat appalling when it's attached to your wrist but it's not really bothering me and I feel certain I'll live.

So here's two more pictures which I took when I was out picking peas for the possible risotto I might make tonight if I ever get hungry again. 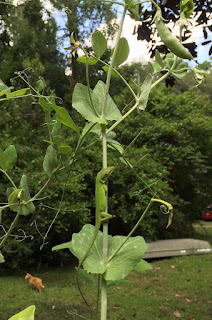 Can you see the little anole? And bonus points for spotting Maurice. 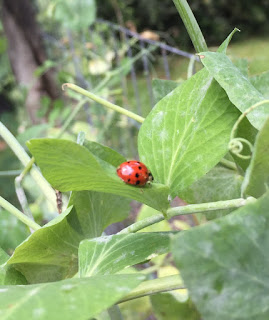 It's really time to pull those peas because they are done and have aphids all over them but the ladybugs are so happy eating the aphids and quite possibly the anoles are so happy eating the ladybugs that I am loathe to do so. But I will soon and the chickens will love them because pea vines are delicious. I'll probably use some myself in a salad. When, you know, Mr. Moon comes home and I actually make a salad. I have plenty of Romaine.

So it's been a far more exciting day than I had anticipated. I had never anticipated discussing astrology with members of the Elizabeth AME church nor had I anticipated being bitten by those hateful bugs. I am in a cheerful mood, perhaps despite and because, both, and also, I got to talk to May on the phone and we make each other laugh and cackle like two witches, mother witch and daughter witch, and my fat little glove hand isn't bothering me much at all. And then there was the nap and if there's anything more delightful than taking a nap on a Saturday afternoon and waking up and realizing that no matter what time it is, all is well and it doesn't matter, I don't know what it is. My baby chicks got to explore some of the bigger world and I know, at least, which one I want to name Georgiebelle.
And hey! I got a 20% off coupon in the mail today for Bed, Bath, and Beyond! Can you believe that? How lucky can a person get????

I think I WILL make risotto. Just for the pure pleasure of it. With fresh peas.