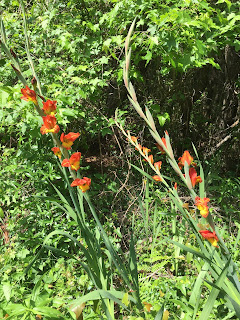 On my walk this morning I noticed that a few of the many, many gladiolas which I have seen sprouting up, their sharp-tongued blade-like leaves growing profusely, have begun to bloom. In all of my years here I have never seen these. I have a sort of wild gladiola which is one of the banes of my yard, growing its leaves but hardly ever its tiny and not very showy bloom and I am sure that is due to the lack of sun. It has spread everywhere despite my efforts at pulling it and this year, it is more abundant than ever.
But these regular sized ones? Well. Where did they come from? I just read an article online which says that the glads which grow here in the wild are not actually wild, but introduced flowers which have naturalized and spread.
And so there you go. I think that perhaps this year's abundant spring rains have nurtured them into such numbers where perhaps only a few grew before. I will tell you this- if even a small percentage of the ones I see on my walk bloom, my hallway shall be filled with vases of them very soon.

Being a complete sloth at the beach last week did me no good when it comes to my body which is as sore and tired tonight as it can be. I've walked, I've hung clothes, I've made many trips to the chicken coop and hen house. I stayed with Gibson and Maggie some and then we went and picked up Owen at school.

Here is Dino World, which is a current exhibit at the Hartmann residence. 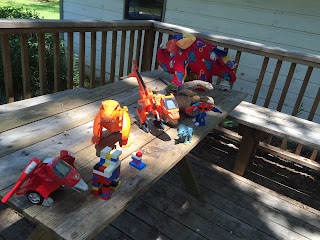 Gibson gave me a tour, describing and naming each and every dinosaur. That boy is so smart. He can sing his ABC's and he can count to I-don't-know-how-many. Here is what his sister looked like. 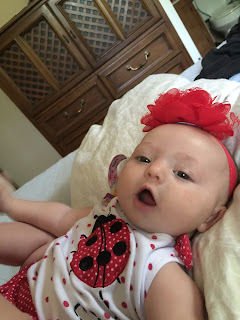 She is such a love, that one. She fell asleep on our way to go get Owen and I was most appreciative of that. I had never driven her anywhere alone and there is nothing in the world as horrifying to me as having a crying baby in the back seat of a car with no way to comfort or quiet her. While we waited in line to pick up our Owen, I read a book to Gibson about a dump truck named Dumpy and his friends. I made up silly songs about each one of the friends- the ice cream truck, the bulldozer, the tractor, the school bus, the garbage truck, etc. I asked Gibson what each should sound like and he would tell me, giving me the first line of the song I would come up with. Oh! How I love four-year olds! They still like to be sung to! Owen cringes when I sing and asks me to please stop.
I do not blame him.

I came home and finished up my chores and got Mr. Moon on the road to auction. He was so tired. I hate the thought of him driving all that way after getting up at six a.m. to go work out, then spending a full day at work. It scares me but he always makes it. And then tomorrow he will get up at six again and go to the auto auction which is a crazy place and bid on the cars his clients want and deal with all of that and then drive home tomorrow night.
He is so strong, that man. He works so hard.
Here's a picture he sent me after he ate his lunch today. 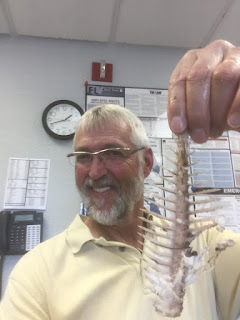 "Now that's how you eat a fish!" he texted me.
The pompano I cooked last night was pretty delicious. All I did was to cross-hatch the fish deeply, coat it in a little olive oil and salt and squeeze lime juice on it and let it sit for a few moments. Then I lightly coated it in flour and gave it a quick panfry in a little oil. If you have good, fresh fish it doesn't need a whole lot to make it good.
You can trust me on that.

So anyway, here I am, exhausted and barely able to walk across the house but I swept the hallway and kitchen and have clean sheets on the bed and a little kale from the garden to go with my supper tonight. Maurice helped me with that. 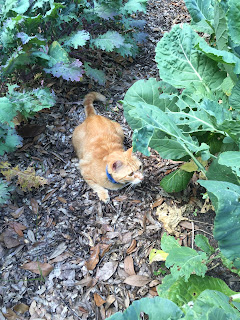 She followed me down the row as I picked, hiding as well as she could beneath the collards which I really do have to pull. Would you look at her face? That cat gets in fights. She looks like an old un-neutered Tom cat. Is she defending our property against the advances of the feral black and white cat I see sometimes? I do not know but she must be brave. Jack, on the other hand, never shows one sign of a fight. 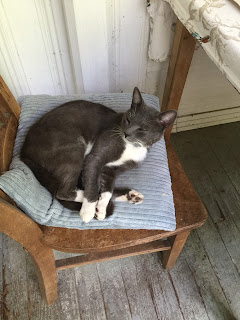 This is how he spent most of his day.

The jasmine's scent is almost overwhelming, the sun is going down. I am hoping that the teen chicks go into their shelter to roost on their own because I am NOT feeling up to chasing them down to put them in there as my husband did last night. We shall see. 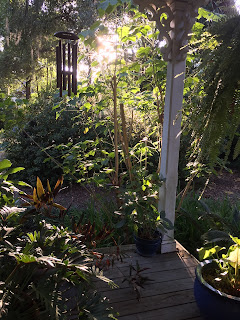 I guess I'll go massage some kale. I'm not sure I have the energy to do that aggressively but I'll do my best.