How I Define Wealth 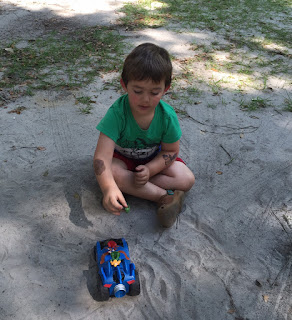 A good day here. Went and got my boys and took them to the thrift store where they scored some excellent toys. Owen got the treasure, though, with some DC Superheroes thing that still had the plastic on it. It had a book, a play mat, and action figures of Batman, Robin, The Penguin, The Joker, etc. Gibson got some sort of snail that lights up like a flashlight.
Don't ask me.

The boys helped me feed grapes to the young chicks and they were amazed at how big they're getting. Gibson looked at Dearie, his very own chicken, and said, "Dearie! You growing up! You going to have super-strength!"
Since Dearie is one of the banties, I'm not sure how strong he or she is going to be but she or he sure is a fine looking little chick. I can't begin to determine what breed that chicken is. I can't wait until they're old enough to run with the other chickens in the yard. I've probably posted this picture that I found online before but this is what the Barred Plymouth Rocks are going to look like. 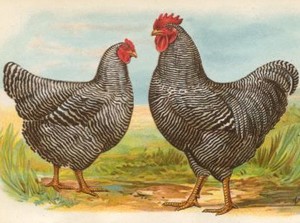 Such a lovely addition to the flock they'll make!
I feel so rich in my chickens. As I have said so many times before, I do believe that it's in our genes to love chickens and to keep them. Such a convenient source of protein, so close to hand, so cheap to raise, even if you don't eat the birds themselves for meat.

Owen helped me in the garden some while Gibson was playing in the dirt. We picked peas and he told me that I do indeed grow the best food. Sugar snap peas are so easy to grow and children love them. They can enjoy them pod and all. We also picked carrots and I should have picked all of them by now because some of them have literally exploded in the earth. It astounds me how many carrots one row has yielded. This time next week we should be drowning in green beans.

I made a soup while the boys were here of venison and peas and carrots (of course) and corn and lima beans and greens (still from the garden) and onion and squash and tomatoes and green beans and sweet potatoes and a white potato and leftover quinoa. It is simmering now. It's really too hot for soup but fuck it and besides, it's All Healthy And Shit. ™

Speaking of food and grandchildren, here's a picture that Jessie sent me of August eating quinoa tabouli salad which he likes very much. 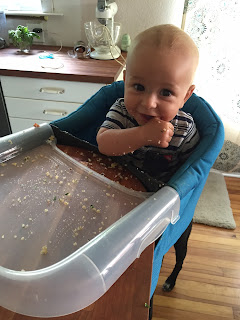 That boy is ready to eat food but I feel quite certain that he is going to continue to be a happy nursey boy for quite some time. Not to be crude, but August is a tit man.

And that has been my day. Lily got a good nap with Magnolia this afternoon which I am glad for because she had to be at work early this morning and I had a good time with the boys. We didn't get to do it ALL this afternoon, but we got to have some fun and it was mighty fine to have them here.

And thus, I am exhausted but in the best way possible.
And tomorrow, I am going to go to lunch in Medart with my friend Liz and I've never had anything less than a spectacular time with that woman.

I'm hungry. Time to eat some soup as soon as Mr. Moon finishes caging up tomatoes which already have fruit on them.
Rich. I am rich beyond my wildest dreams.