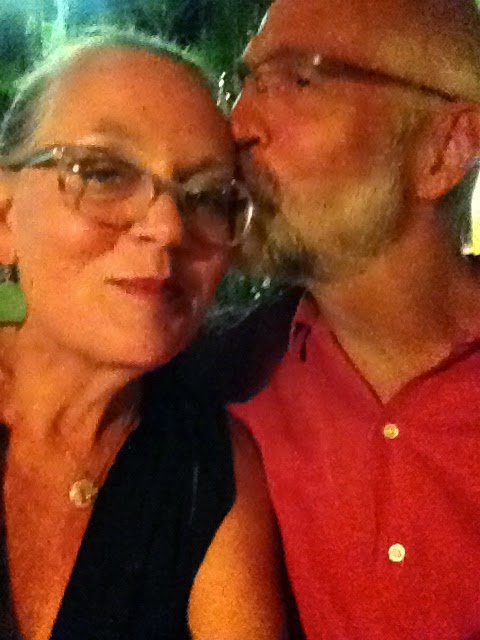 There's a place on the square which serves absolutely the best pizza I've ever eaten in my life. It has the thinnest, crispiest crust and is just incredible. The service at this restaurant is, to say the least, slow. But you know. You're right downtown and can go around and look at things and take pictures and when you order Bacardi anejo and coke they bring you a glass of rum and a can of coke and hey- I've spent worse hours. I walked down through the flea market and took a picture of the Virgin where they have her entrapped in a small cubicle. The door was locked but I took this picture. 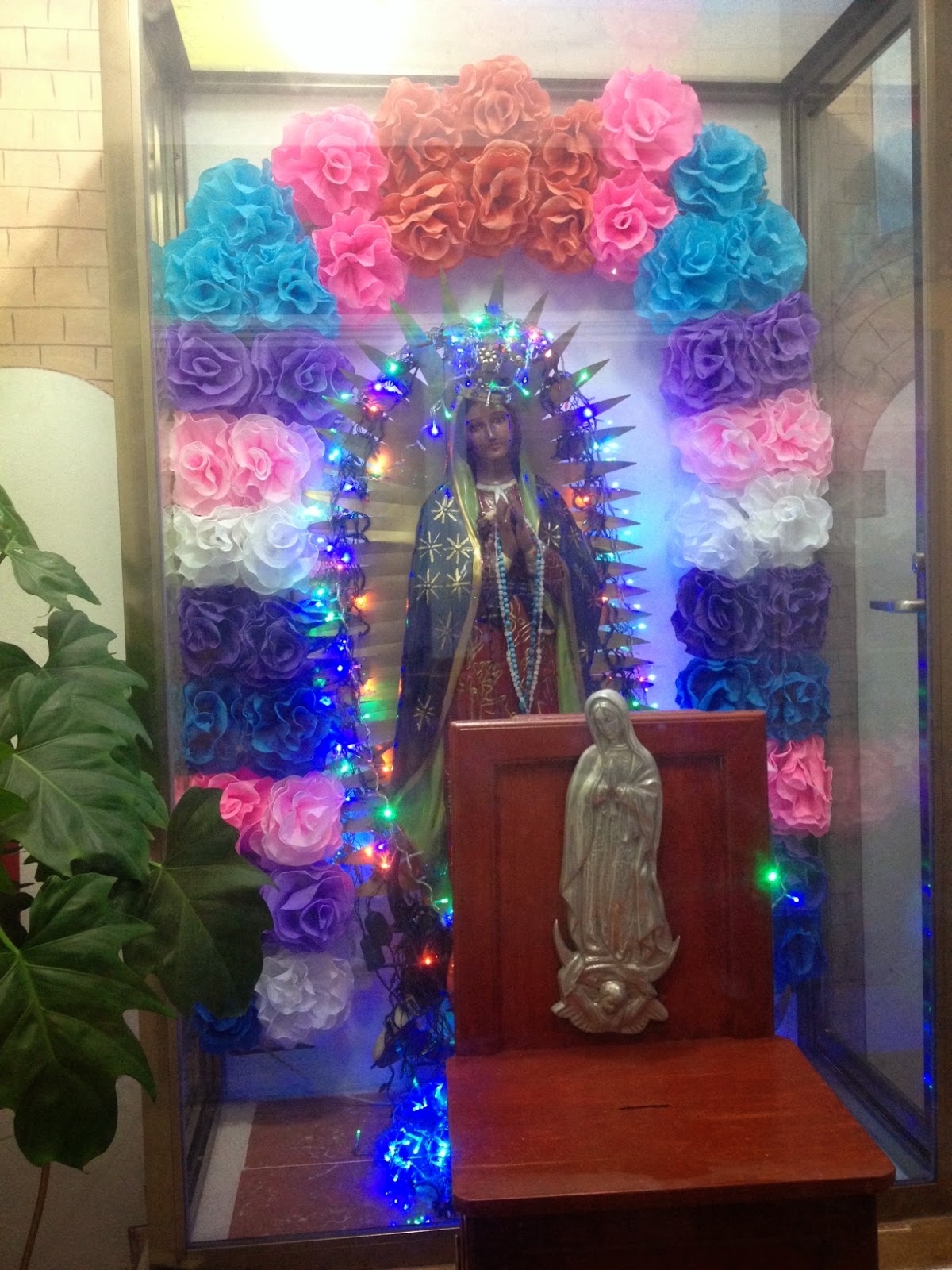 Then I took this picture. 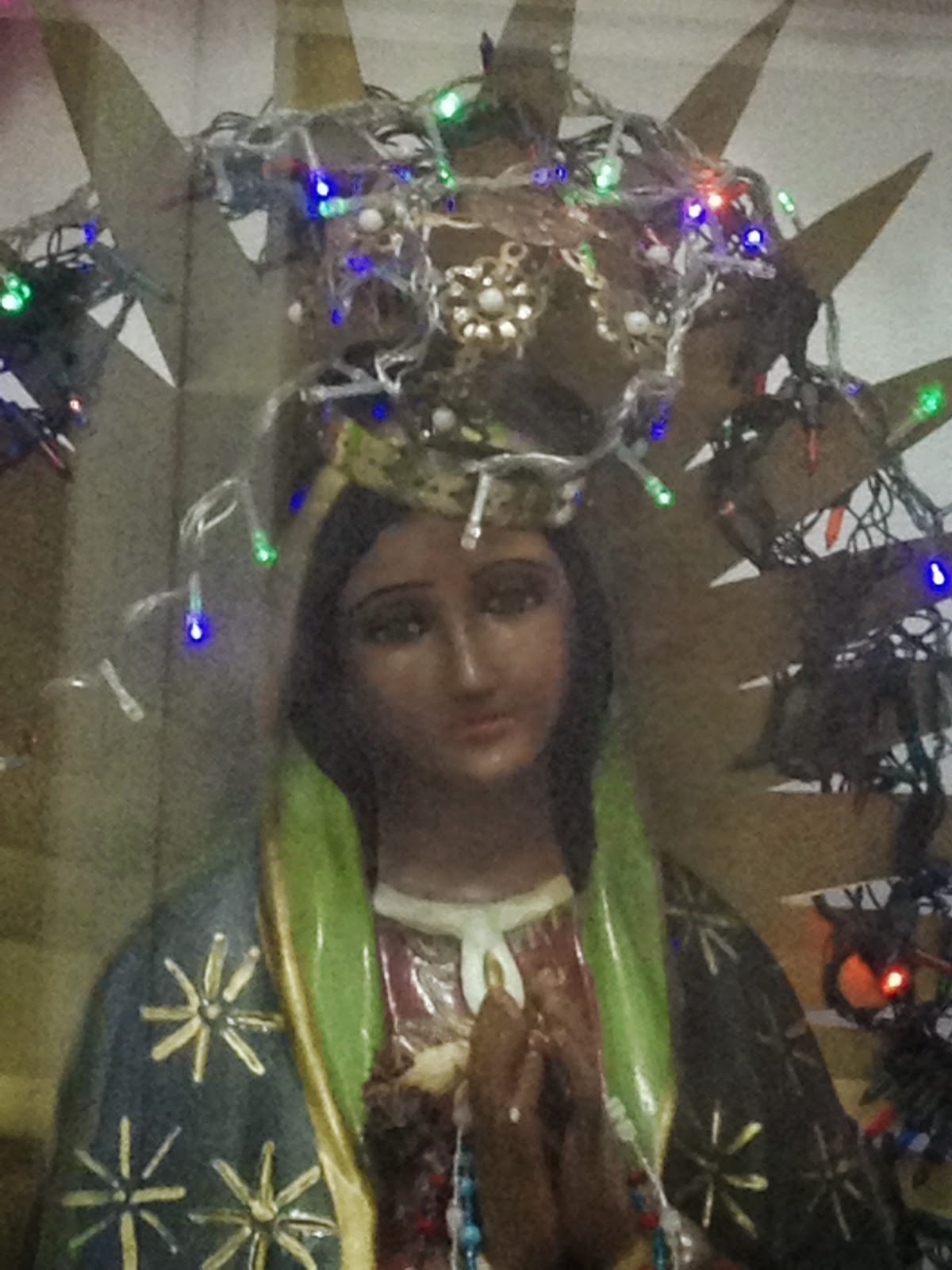 Her face is so sad and I think it's because there's a tapestry hanging on the wall to her left wherein her son Jesus is hanging from the cross with thorns in his head.
I just can't help but think...how cruel.
She can't get away from that sorrow for one second.

As we sat at our table waiting for our supper, an entire drama played out in front of us. An older couple- and when I say older, I mean older than we are, so you know, ancient- sat down. They were French. I figured this out quickly. They not only spoke French but they used their hands, their arms to convey what they were talking about and at first, they were sweet. The woman had a flower which the man had obviously bought for her and they chatted and she posed for a picture with the flower. But then, as time went on, their conversation became more and more heated. Voices rose a little bit and the gestures became more and more animated. I couldn't tell if they were becoming angry or just more excited. I do not speak French. Then suddenly, the man slammed his hand down on the table and spewed forth an entire speech and then the woman also hit the table and her words became forceful and she jumped up from her seat and threw the flower at him and walked off, holding her hand which she had hurt when it collided with the table in her anger.
She eventually walked back to the table and took a napkin from it and wiped her eyes and cradled her hand in her other hand and he paid the bill and they did walk off together but it was sad and I felt so sorrowful for them.

In all of our trips here, we have seen three scenes of domestic anger and every one of them has involved not Mexicans but tourists. I am not saying that there is no domestic violence here. I am sure there is. I have just never seen it.

I remember when Mr. Moon and I were young and we always had at least one argument or disagreement when we were here. This is one of the wonderful things about getting older- we no longer do that. We haven't had so much as a minor dust-up. We are both so very quick to say, "I think you may be right." Or, "I have no idea. What do you think?" And I cherish every moment of us being here together and I think he does too.

The days of our trip are winding down. Dos mas noches.
I can't even say it in English.

And tomorrow Mr. Moon is going to go out fishing with the guys who work here who will be fishing for the restaurant. When we were discussing this opportunity with Eva yesterday she said, "If you catch fish, I will feed the hell out of you." This is completely and utterly the best place we've ever stayed. When we came in tonight, the sweet lady who works at the desk said, "I was worried! You are so late!"
I said, "Oh, mama. We are fine."

And then I changed into my bathing suit and got into the pool and floated looking up at the stars and dove under the water being a mermaid and I am going to go to sleep very soon. We have been sleeping so much and so very well. Eating like kings and queens. For lunch today we went deep into the 'hood and ate at a favorite sidewalk place where the shrimp sandwiches (Tortas de cameron) are made in front of your eyes and you can get a grapefruit soda (Toronja) with them and there is habanero mayonnaise to go on the sandwiches.

That's all I have to say about this day.

It has been so very good. And I hope that the French couple has made up by now and I am grateful to them for reminding me of how lovely I have it, how incredibly sweet it can be.