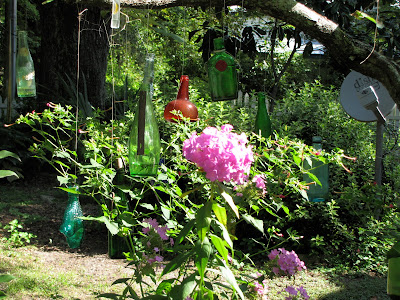 I sit and drink my yogurt/fruit/flax/prunes smoothie. I am sweating. I took a walk. I thought I might puke before it was done- I was that hot. I have taken the trash to the trash place. I am washing sheets, towels, rugs, clothes. I have my dogs locked out of the house because I cannot deal with them any more or their shit or their pee.

The phone rings. It's Lis and we talk and giggle and chat and I glance out the front door to see a flock of vultures descend upon my front yard. There's a dead armadillo out there, stinking up the neighborhood and now THIS!
Can I just say that it's disconcerting for a flock of vultures to descend in your yard? Well. It is.
After I get off the phone with Lis I go outside with my camera because of course that's what I do. All of the giant black birds take off and I did not know this but when they flap those heavy wings of theirs they make a sound like the gates of hell opening and they do not sing, vultures. No, they grunt like pigs. When one flew over me, I actually made a little scream sound and ducked.
But I did get a picture of one brave black bird standing by the deceased. 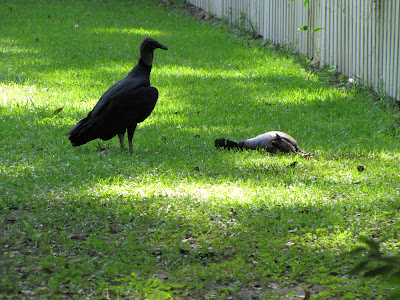 Poor armadillo. Lucky bird.
Because I am here to tell you that I am NOT going to go out there with a shovel and a bag to get rid of that animal. THAT IS NOT MY JOB!
I can clean poopy diapers 'til the cows come home. I handle most of the trash around here and I can muck out a chicken coop without blinking an eye. I clean toilets with no problem and wonder why people wear gloves when they do it. I can kill and dispose of roaches. Even the ones so big you have to repeatedly hit them with sledge hammers to crack them into death.
Yesterday I sat and watched in fascinated awe as my massive banana spider sucked the living juices out of a beetle bigger than a strawberry with her mouth at one end as her man mated her at the other. This did not disgust me in the least.

But I will not and can not go scoop up a dead armadillo.

And so, I guess I'll just have to put up with vultures in my front yard, won't I?

Well, that's life and Mr. Moon is just going to have to deal with this when he gets home.

And that's me on a Friday in August of 2010. Owen was here until eleven last night and he gave both me and Mr. Moon more hugs and kisses than you can imagine. His Pop-Pop took care of him while I went to a rehearsal and then we fed him his supper. Well, he shared ours. He ate okra, cooked carrots, broccoli, and field peas and rice. With GUSTO! Then Pop-Pop got in the bath with him and they played duckies and I came in to wash the boy up and tuck him into his towel and dress him in his jammies and then Mr. Moon and I sat in the living room and fell into semi-comas as the boy ran around the room laughing hysterically and playing peek-a-boo behind the curtains.
And he'll be back in an hour.
And I need to do more laundry and take a shower and feed the chickens and try to get something going for dinner and hell, I don't know what all.

But I AM NOT DOING ANYTHING ABOUT THAT ARMADILLO! As god is my witness, I am not.