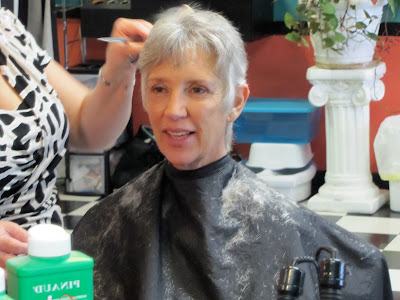 There's Kathleen getting her hair cut by the talented Ms. Paige. Doesn't she look chic? Aristocratic? Cool?
Yes. Yes she does.
She is also wearing her make-up that she got at the Sephora shop in the Penny's. THEY HAVE A SEPHORA SHOP IN OUR JC PENNY'S, PEOPLE!
Yes, we too may now know the joy of Sephora, right here in North Florida. Smash Box, Urban Decay, all that cool cosmeticky stuff that we've been forced to order online. Plus, the sass-o-frashicious attitude of the Sephora Style. And I have to tell you that the make-up on Kathleen's face looked terrific. And she bought a bunch and bought me a box of sparkly eyeshadows that makes my heart sing. Colors like "Kiddie Pool," and "Half Baked."
Just what a fifty-six year old woman needs.
Seriously- that's EXACTLY what a fifty-six year old woman needs. Trust me. And then we went down to the nightgown section and bought old-lady cotton nightgowns.
We are going to be so stylin' at the beach but we're not leaving until Sunday. So don't miss me yet. And that brings to mind the old song, "How can I miss you if you won't go away?"

And then I did something I hated to do. I called Jan and told her that I just can't commit myself to really being much help in directing the play Sylvia. I haven't been much help as it is, but have made most of the rehearsals up 'til now but suddenly, it's a bit overwhelming. And I told her I'd be there when I could but that they can't count on me and that hurts my heart.
I'm going to go take care of Owen tonight while his papa gets foot surgery (who does surgery at 6:30 at night?) and so I'll miss tonight's rehearsal and we'll be at the beach and I'll miss Sunday's and Tuesday's rehearsals so...dammit.
But.
Life is full of priorities and sometimes you just have to set limits.
At least I do.

And right now I need and want with all of my heart to be available to Kathleen if and when she needs me and also to be available to take care of my grandson and Jan knows that and I love her for telling me that it'll be wonderful when I'm there and not to make it a worry when I can't be.
If only everyone in the world was so easy going.

Which makes me want to talk about that so-called Mosque they're building in New York but I don't have the time.
I will mis-quote Kathleen Parker whom I do not always agree with, when she said that in order to teach tolerance, we must be tolerant.

I think that about sums it up for me.

All right. Time to go back to town and see that boy whom I hear is feeling much better.
Let's all just keep plowing on and forth and so forth and remember:
Sparkly eyeshadow never hurts and a good hair cut can change your life.

And also, the chicken salad at the Mockingbird Cafe is awesome and May is an awesome server and Lon and Lis will be playing there on Saturday night. I hope to be there with Kathleen and her new haircut and Vicki, her BFF. And maybe Mr. Moon if he can be persuaded to take us out.
You'll know us by our sparkly eyeshadow.
Well, not Mr. Moon. You'll know him because he'll be the handsome tall guy with the three ladies wearing night gowns.