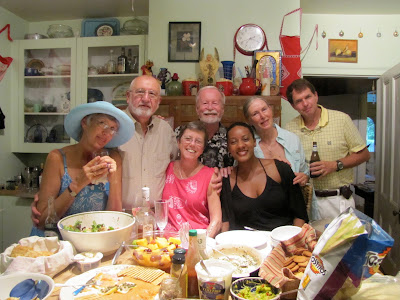 I love to take a posed picture and then snap what happens right afterward. 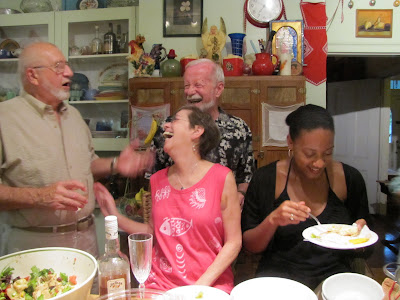 You get the real stuff there. And so it is here.
Ah lah. It was a good party.
Not everyone was in those pictures but they'll do. They'll do.
In the one at the top of the page you have Kathleen and Ron (the preacher and actor) and Jan and Jack (the lovers) and Brittany (our newest Opera House actor) and Marcy (actor and friend) and Fred (her funny and darling husband).
There was food, there was drink. I don't think anyone cared how much dust was still abounding. I made everyone go outside with me and let those who wanted pat the chickens on their roost.
Have you ever been to a party where the hostess took you out to pat the chickens? Probably not.
Well.
Freddie came out and showed us the intro to the film he's been working on. He came out earlier this afternoon to shoot a little more film with me. I had to take clothes off the line and get all emotional about having no phone service and I sat in the middle of the road in front of the house and went into complete despair. Oh! It was so much fun! He even got Mr. Moon to be in the film, walking past a window.
Anyway, we had a bit of a film festival and we watched the intro and also the two shorts that I was in and when Natasha came onscreen, everyone roared with laughter. Oh. It was fun.
He gave me a CD of "my" movies when he left and he said the same thing that Ron, the Preacher said when he left, which was, "God bless you."
And you know what?
That was fine and I took those words into my heart knowing that both men were saying something which, although I am not on the same page as they are about god or God, meant something very dear.
And when Kathleen left, I kissed her on the lips and I didn't need to say "God bless you," because, well, she is Kathleen and she is blessed. And she has blessed me in so many ways. She brought me my chickens, she called Freddie and set up auditions and she introduced me to Vickie and Judy and Denise and she has taught me to make soap and she made me feel less crazy when I was crazy.
And all of the people here tonight are part of this joyous life of mine which has changed so very much in the last year. 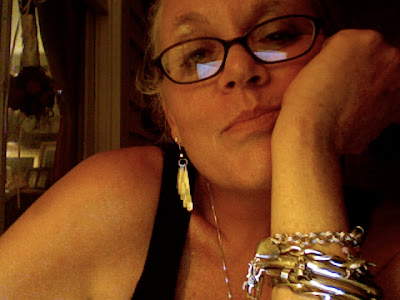 It's late. I'm going to bed.
It's been another good, busy day.
Tomorrow will be too.
I wish I could take all of you out to pat my chickens on their roost. They are so soft and they fuss so sweetly.
Somewhere in this country there are people desecrating the civil rights movement and talking about Jesus and honor and restoring this country.
But right here, tonight in Lloyd, Florida, there has been sweetness and love and that, to me, is what life is all about, whatever country we are in.