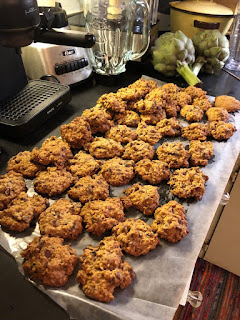 I got up pretty early this morning because I had to go into town to get my blood drawn in advance of my routine-every-six-months check-up with the sweet and lovely Dr. Zorn next week and if you know me at all you know how much I hate this and even if you do know me I doubt you know how much I have been dreading this appointment. I was okay about it in February and March but in April I started thinking about it too much and then in May I began really worrying about it and now it's June and I will admit that it's been on my mind almost constantly and yes, I do have a neurosis about this and no, I don't understand it but it's as real and solid as my kitchen stove, as undeniable as the sunrise.
So. Yes. I had to go get my blood drawn and as I have said before, the lab where I go packs people in like anchovies are packed into a small tin and when I'd first signed in and found a spare chair to sit in, I looked around and almost got back up and fled.
But I did not.
I sat there for the forty-five minutes it took for my name to be flashed up on the screen and then it took approximately forty-five seconds for the phlebotomist to take my blood. She was excellent and I told her so. I barely felt the needle slip into that vein.

And then I went to Hardee's and bought myself an egg, bacon, and cheese biscuit because it had been a fasting blood situation and I ate it on my way to Jessie's house, thanking god and all the angels for there not being a Hardee's at the Lloyd exit off of I-10 because if there is one fast food outlet that I have a very hard time avoiding, it is Hardee's.
That chain has its shit together when it comes to evil deliciousness.
I went to Jessie's because she and Vergil and the boys are leaving for their North Carolina summer trip on Sunday and it was my plan to try and help Jessie with the boys a bit so that she could get a few things done in preparation.
I can't say I helped that much but stories were read and while I was reading a tiredness came over me that reminded me of my days working at the Birth Center and how I'd feel after being up all night and still had work to do after the new family went home- the scrubbing of the tub, the finishing up of the laundry, the remaking of the bed, the sterilizing of the instruments and so forth. I'm not sure why I felt so suddenly exhausted but the point came when I could not keep my eyes open and I apologized to Jessie and took a tiny nap on August's bed.
It was okay and I felt much better when I woke up. I think that between the dread of the upcoming appointment and the knowledge that Jessie is going to be gone for a few months is dragging me down to some place that only sleep can rescue me from. Temporarily, at least.
We went and got a nice lunch and then I stayed at Jessie's house with Levon while Jessie took August to the doctor because he is obviously not hearing very well out of one ear. There is no doubt that it's related to this sinus infection he's had but she was worried and wanted it checked before they left. I had a good time with Levon and he was his merry self. We went outside so that he could play and we read a bunch of baby books and we did puzzles and played with a dinosaur train and looked at pictures on my phone of all his favorite people. He asked for milk and I gave him some and when I got my comb out to deal with my hair, putting it back in the braid I'd made at seven thirty this morning, I combed his hair a little bit, so very gently, and he liked it and asked for more and so I combed that fine, blond angel hair of his and sang him songs about how much I love him.
I can't believe they're leaving. And oh! What an amazing time they're going to have and August still remembers the little creek on his other grandmother's mountain where they waded and he found crawfish and he talked about his cousins and how he'll play with them and it's so good that he and Levon have this whole other world to live in and explore and be loved in- their daddy's world- but it's going to be hard on me, not seeing them for such a long time. They grow and change so quickly right now that even if we go and visit them, which of course we will, they will be completely different little boys in some ways although August did tell me that he will remember my name.

So that was the better part of my day and then I had to go to Publix and Mr. Moon asked if I would buy chocolate chips so that he could make cookies to take fishing with him this weekend which was a blatant request for me to make cookies and so I came home and made oatmeal, raisin, pecan, chocolate chip cookies which are practically health food if you think about it. And unloaded the groceries and put a load of laundry in the dryer and hung up the shower curtain I washed yesterday and I am so tired.
I know it's not real fatigue though, simply the fatigue of neurotic dread and anticipatory grieving.
I am so dramatic.
Well, guess what? I just am.

When I opened my freezer to put away the frozen pizzas I had bought (and that will be explained tomorrow, most likely) I discovered a box that was marked "Wild Alligator Meat" and also, "5.25 pounds."
As I told my husband who explained that this was a gift from a fishing buddy of his, I have no idea what to do with alligator meat and very little desire to learn.
I think he may have been hurt.
Well, this woman may have absolutely reached her limit on dealing with wild game. I'll take all of the small feral pigs you bring me but alligator meat?
Yeah, probably not.
But one never knows.