And Yet Another Insect Which Torments Us 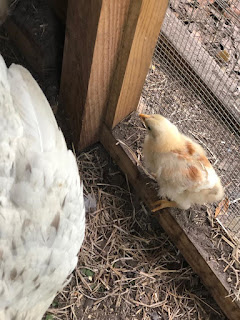 That's one of the chicks which is pretty self-evident. They're getting markings in their feathers now and actually, they're getting feathers which is a pretty big deal for a chick. One dug itself out this morning and so Mr. Moon and I decided to let them out of the little coop they've been in since birth so that they could roam about in the big coop. We had to scoop them up to get them out which caused Darla to go into full-tilt warrior mom mode. That hen is the most possessive mother I've ever met.
Well, besides me, possibly.
She pecked at us and kept her tail fluffed which is what chickens do when they feel threatened because it makes them look bigger than they are. I guess this is the idea, anyway. 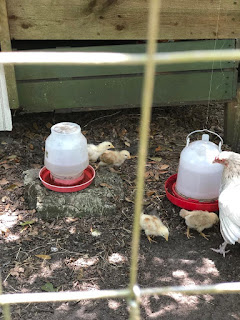 Here's what four of the littles look like in the big coop. Darla is obviously watching over them carefully. They scratched and had a grand time all day long and last time I checked, one had made its way back into the little shelter and I wish they all would so we don't have to chase them down and put them back in ourselves because that is not an easy thing to do. Little chicks can dodge and weave better than any pro football player you ever saw. Or basketball player. Or some kind of player. Whatever.
These chicks have been strange though. I swear- they barely eat. Every batch of chicks I've ever had has gone through Chick Starter like nobody's business. They tear that shit up and also scatter it all over the ground but these little guys seem to hardly touch the stuff. But they must be eating it because they're alive and growing and seemingly thriving. I do give them some grapes and greens and watermelon as treats but that's not much. And what's Darla eating?
It may just be that it's too hot for them to eat much. I suppose that when baby chickens are born when it's chilly, they need a lot of fuel to keep them warm.
Not so much when the temperatures are in the nineties.
I talked to Jessie about this issue this morning.
"She's nursing them," said Jessie.
We laughed.
"Chicken milk!" I said.
Wouldn't that be something?

August is still sick. I talked to him too and he was pretty happy, watching Coco and playing with Play Dough. He's eating fine and told me all about the dolmas he had just eaten and how much he liked them. He's got a pretty cosmopolitan attitude about food, that boy, although if you ask him what he wants to eat he'll generally say, "chicken" or "french fries." He's not picky though. Neither is Levon. I told him that maybe soon he can come over and we'll lie around and read ALL the books which would surely make me happy.

So I got a new attitude about the yard work today. I think that being on the downhill side of clearing the crocosmia (I still have to look that up every time to see how to spell it and I have no idea how to pronounce it) gave me new energy. And by god, I almost did it!
The last bed I pulled looked like this before I started: 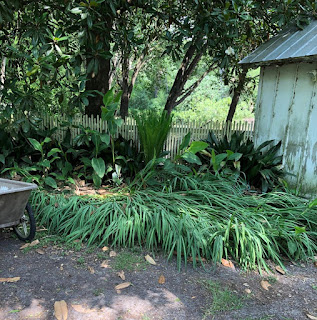 I pulled every damn one of them plus some other plant that I don't know the name of, a sort of small-leafed vine that's been taking over along with all of the glory bower in that bed. I also trimmed that sago. That's not the only area I weeded but when I finished with that one, I was DONE!
I'm fairly excited to move on to different areas of the yard that need taming, one of them being the camellia bed and the other the little yardette outside the old kitchen. That's going to be some damn work.
Meanwhile, Mr. Moon worked inside mostly, vacuuming and then spraying for fleas. I know we have fleas but they never bite me so I can easily ignore them but they love him. And the children. I'm really grateful that he did that. God knows I don't vacuum for any reason whatsoever. I suppose I would if Lily and/or Jessie told me that they wouldn't bring my grands over unless I got rid of the fleas. Maybe someday I'll tell the story I have about the fleas I had in a house that my first husband and I lived in when Hank was a baby. It was a nightmare. Anyway, that was a task that needed to be done and he did it.

Well, it's been an hour since I started writing this and since then we went out and got those babies back in the box along with their mama. And it was just about as difficult as I thought it would be. But they're safe for the night. We also picked some arugula for tonight's supper and surveyed the garden. Let me just say that if I had to feed a family on what we grow out there we'd starve.
To death.
We'd be eating a lot of squirrel.

Speaking of eating, I made these last night. 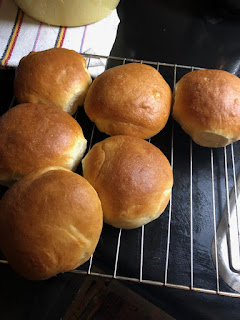 I made them from a recipe I found online from the King Arthur flour company. We didn't have hamburgers. I thawed some of that wild pork I had cooked in banana leaves and heated it very slowly with onions and barbecue sauce and all of that made the best pulled pork sandwiches anyone would ever want. We also had some green beans and cucumbers and cherry tomatoes from the garden. And corn from Publix. It was a fine meal.

And now I better get started on tonight's meal. Shrimp salad. Hard to beat that. Arugula will be involved.