This is going to be short and sweet. I got home late from being in town and staying with August and Levon while Jessie had another appointment and I have a dishwasher to unload and a soup to make.
Corn chowder tonight. Somehow we have ended up with many ears of corn. Not corn that I grew but corn that someone grew.
It's been a good day. I took a nice walk and didn't die and did some things around the house and then weeded cucumbers and picked cucumbers and then I went to town to stay with those boys who were napping the entire time Jessie was gone.
Poor little mama. She could have had a nap herself. It almost never happens that they coordinate naps.
But August woke up when Jessie got home and then Levon did too and I got to read August a few books. He handed me one, a Berenstain Bears story about manners and said, "This is a sweet book. It's like you and me."
Swoon.
Then quick, quick, I drove to Publix and did my shopping and now I'm home, car unloaded, groceries unloaded, everything put away, eggs collected. Today's pickings have been put away in the refrigerator. 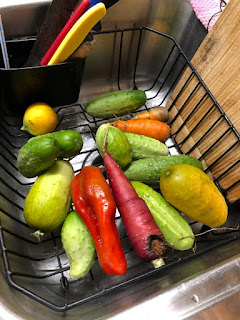 I think it might be just about time to get out the canning kettle and the pickle recipes.

I have some bananas growing on a stalk way up in the banana tree (bush?) and will get a picture soon. I have no idea how I'm going to get them down. I'm pretty excited though. This almost never happens.

Alright. Time to go shuck corn and cut it off the cob. I know my husband is exhausted. He literally got up at 3:00 a.m. to drive to St. Pete to pick up a truck and drive it back. He's had a very, very long day. I need to feed him and direct him to the bed.

It's summertime. No doubt about it.