The day began with a watery eye and a pain behind it and then got even better when I opened the large wooden box that I keep chicken feed in and saw a rat.
Oh sigh.
Too much nature.
I hit the side of the box hard and the rat did scuttle but only to hide and I could still see his tail. I don’t especially hate rats but I do hate it when they’re in my space. Or spaces I have designated as mine.
I closed the lid and apologized to the chickens for not giving them any scratch but I wasn’t sticking my hand anywhere near the little critter. Illogical, I know, but true.
I spent the morning doing laundry and writing a letter and then I drove to town to meet everyone for Hank’s birthday lunch at El Patron. We ate out on the covered deck and it was not uncomfortable and there was plenty of room for all of us. “All of us” being Hank’s siblings and six nieces and nephews and Vergil and Michael and Hank’s two dads and two moms and Rachel and two other friends.
The sixth niece is the daughter of my ex-husband’s first child from his first marriage. Got that? She’s a sweetie. 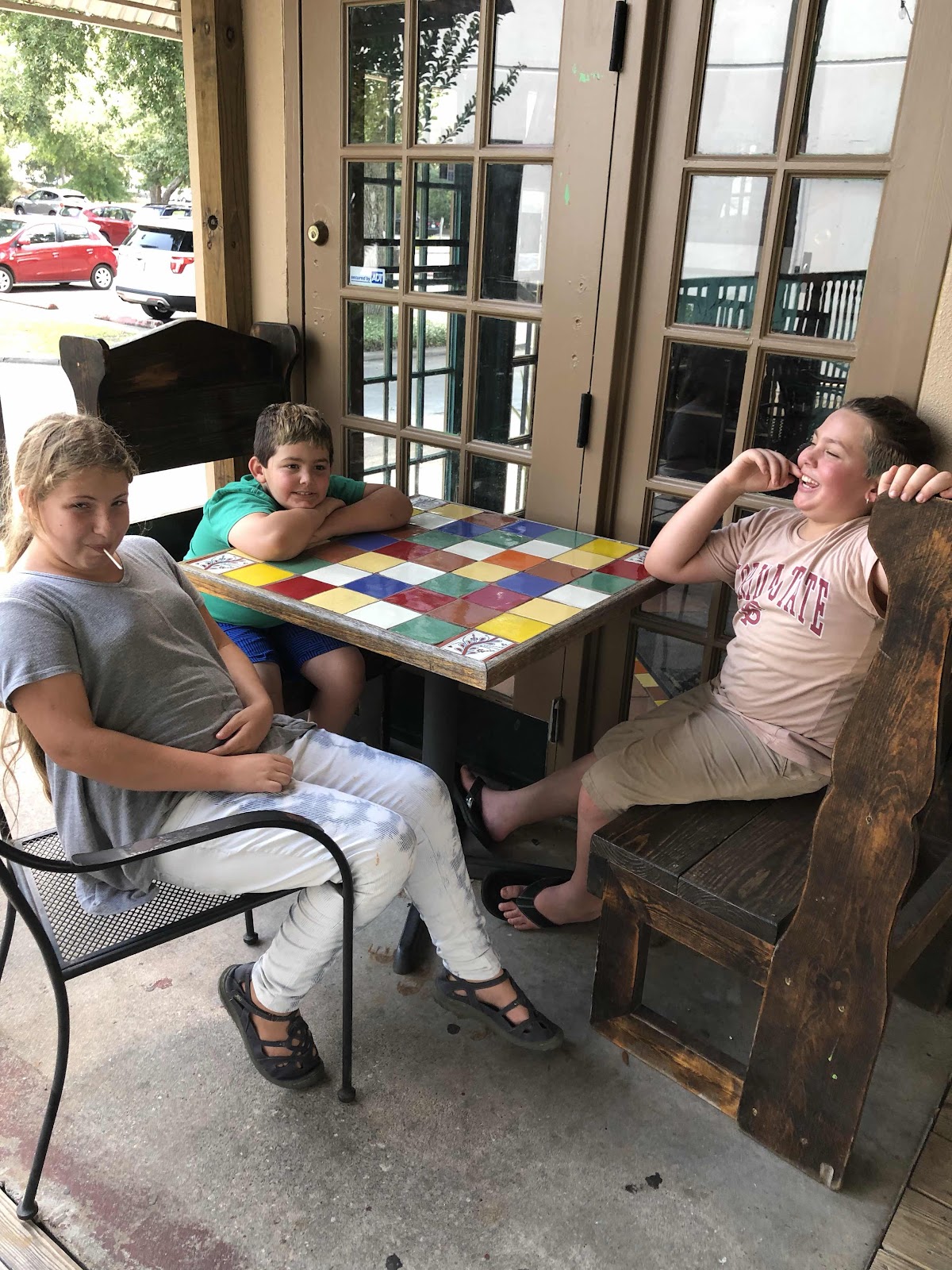 That’s her with Owen and Gibson. The Big Kids.
Levon has his shovel. 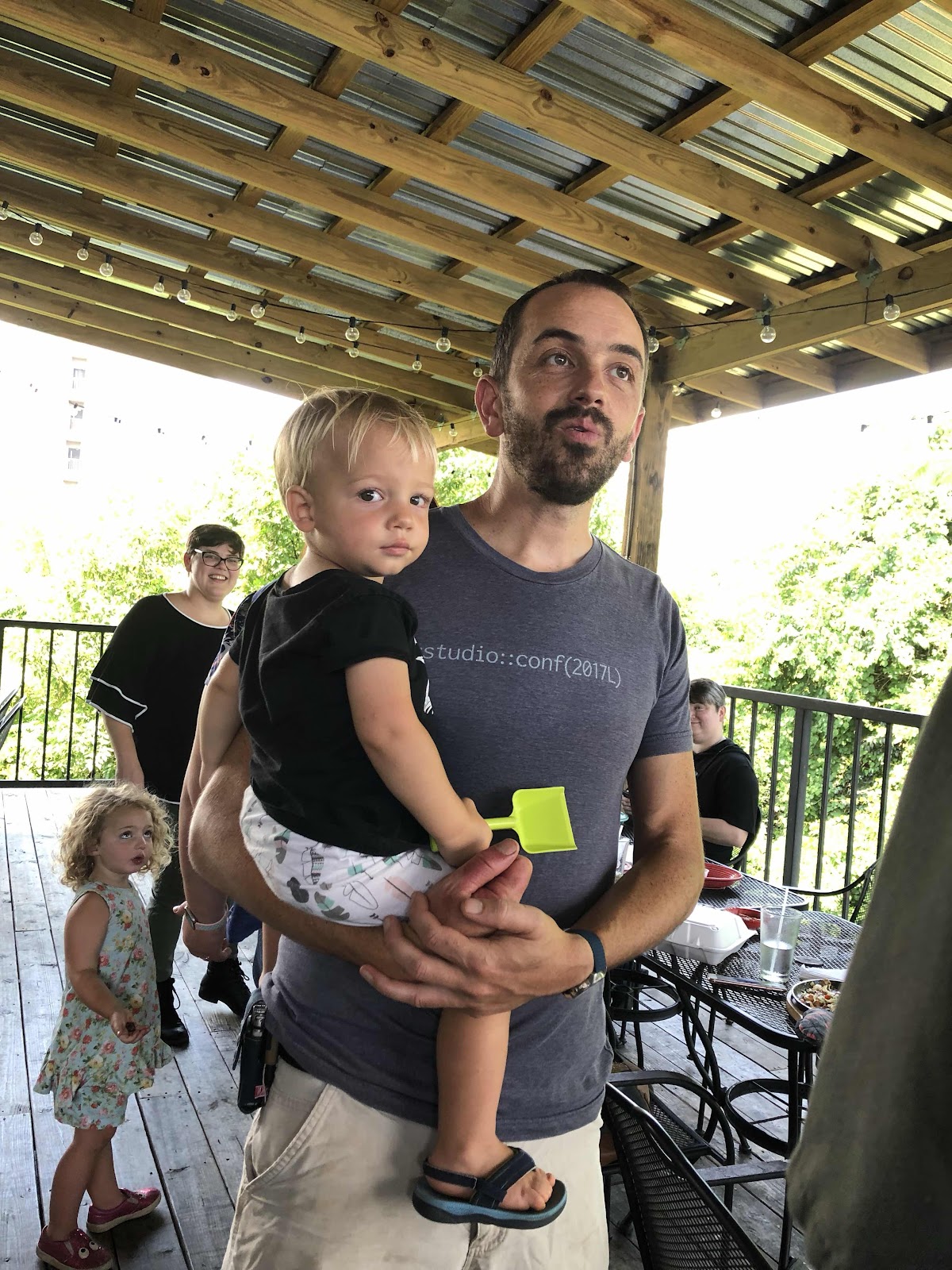 When he saw me he said, “MerMer!” And pointed his shovel at me. I was thrilled.
August went immediately to his grandfather. 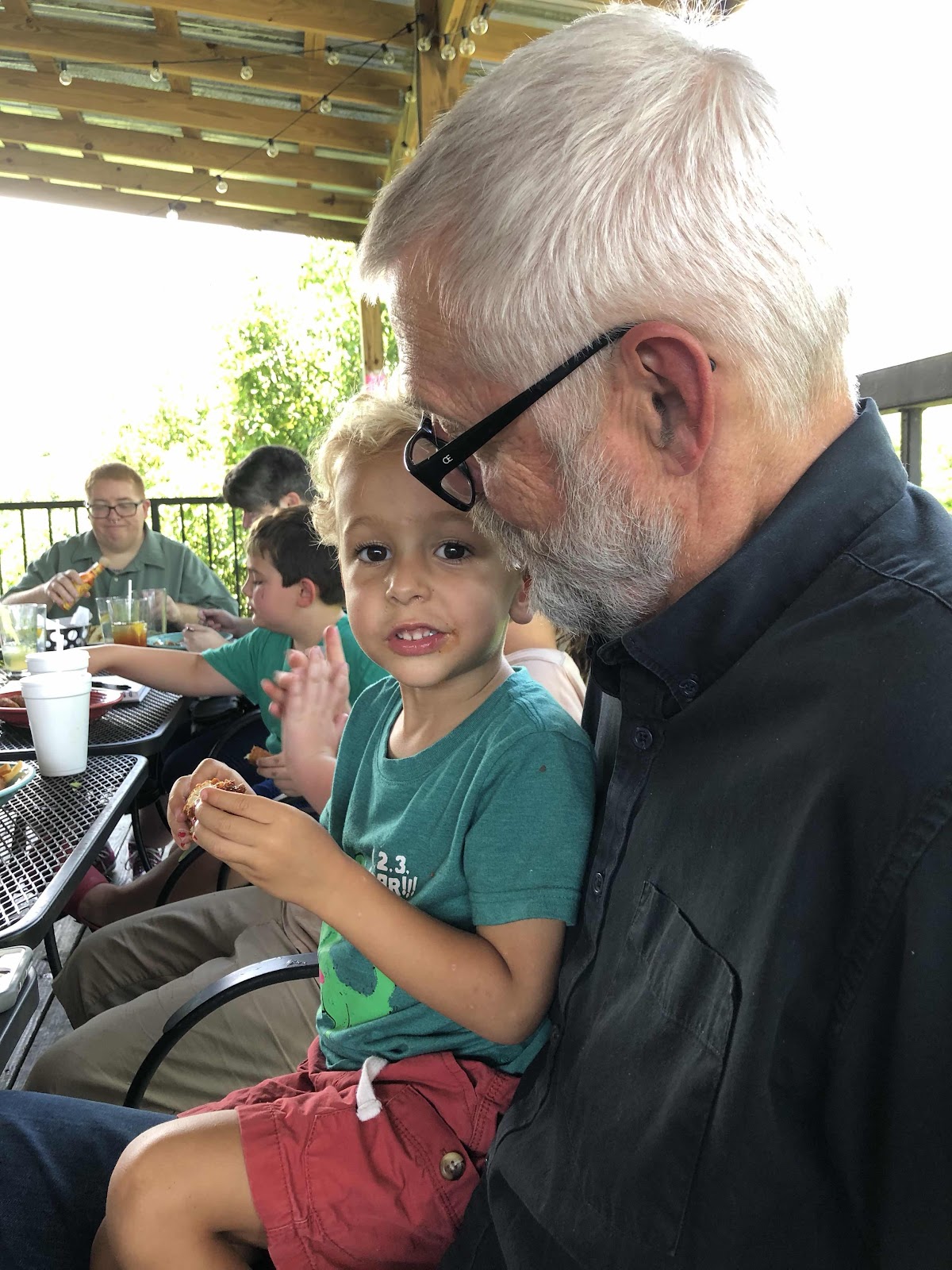 But he hung out with the kids too. 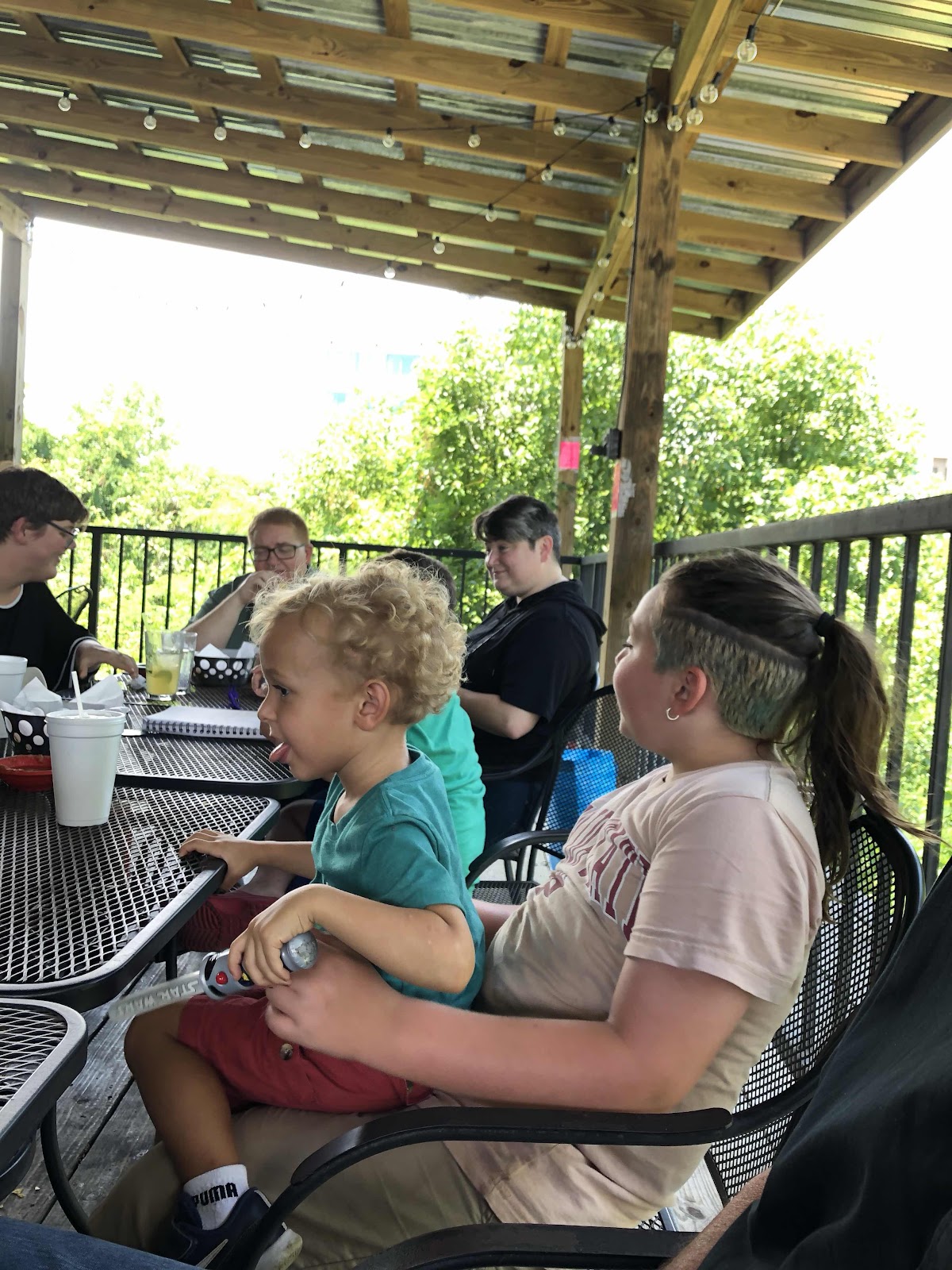 Owen being the sweet cousin.
He is so good with the little ones.
Maggie claimed me as her own for awhile but then she moved on to play and be with August. 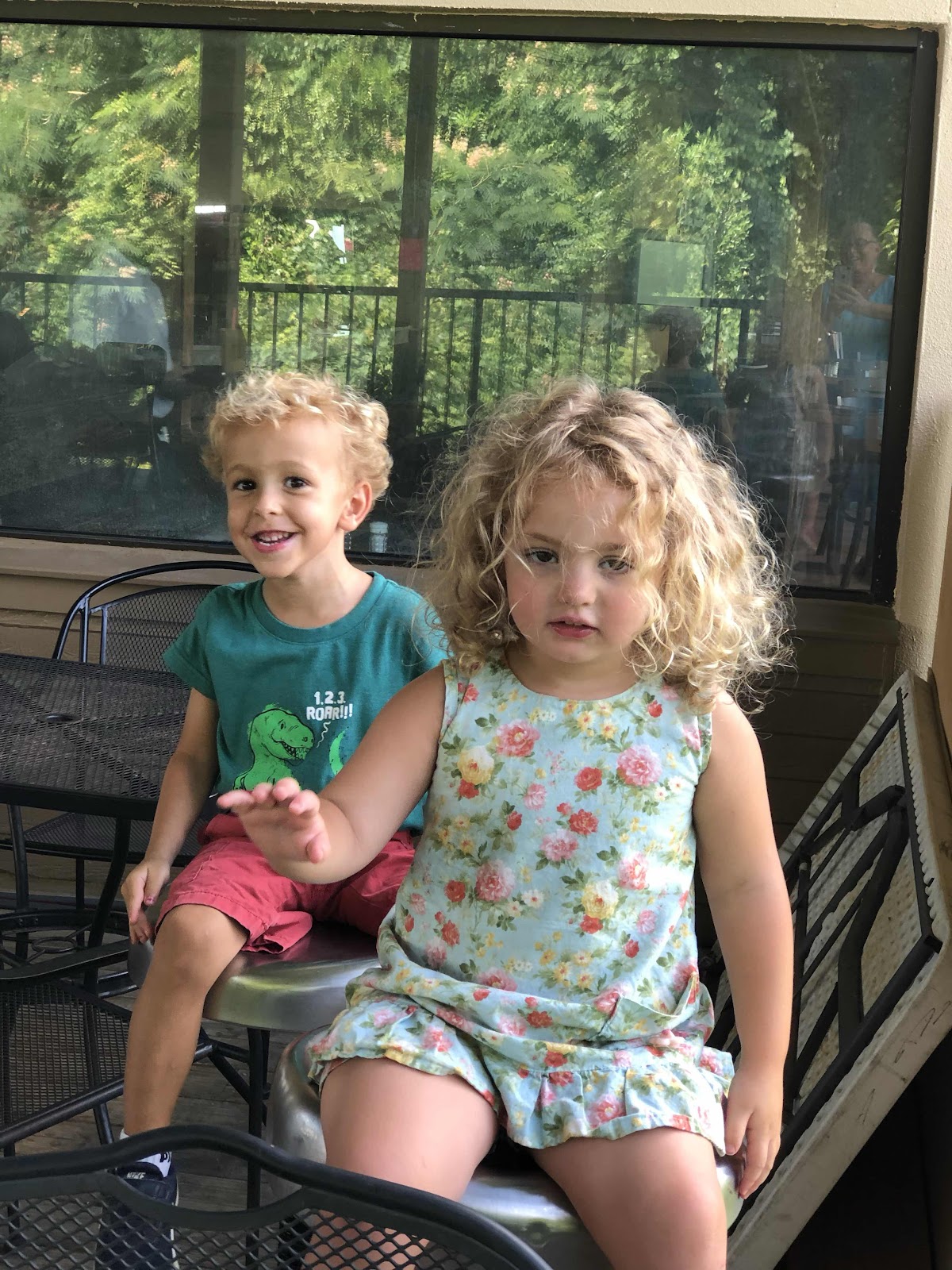 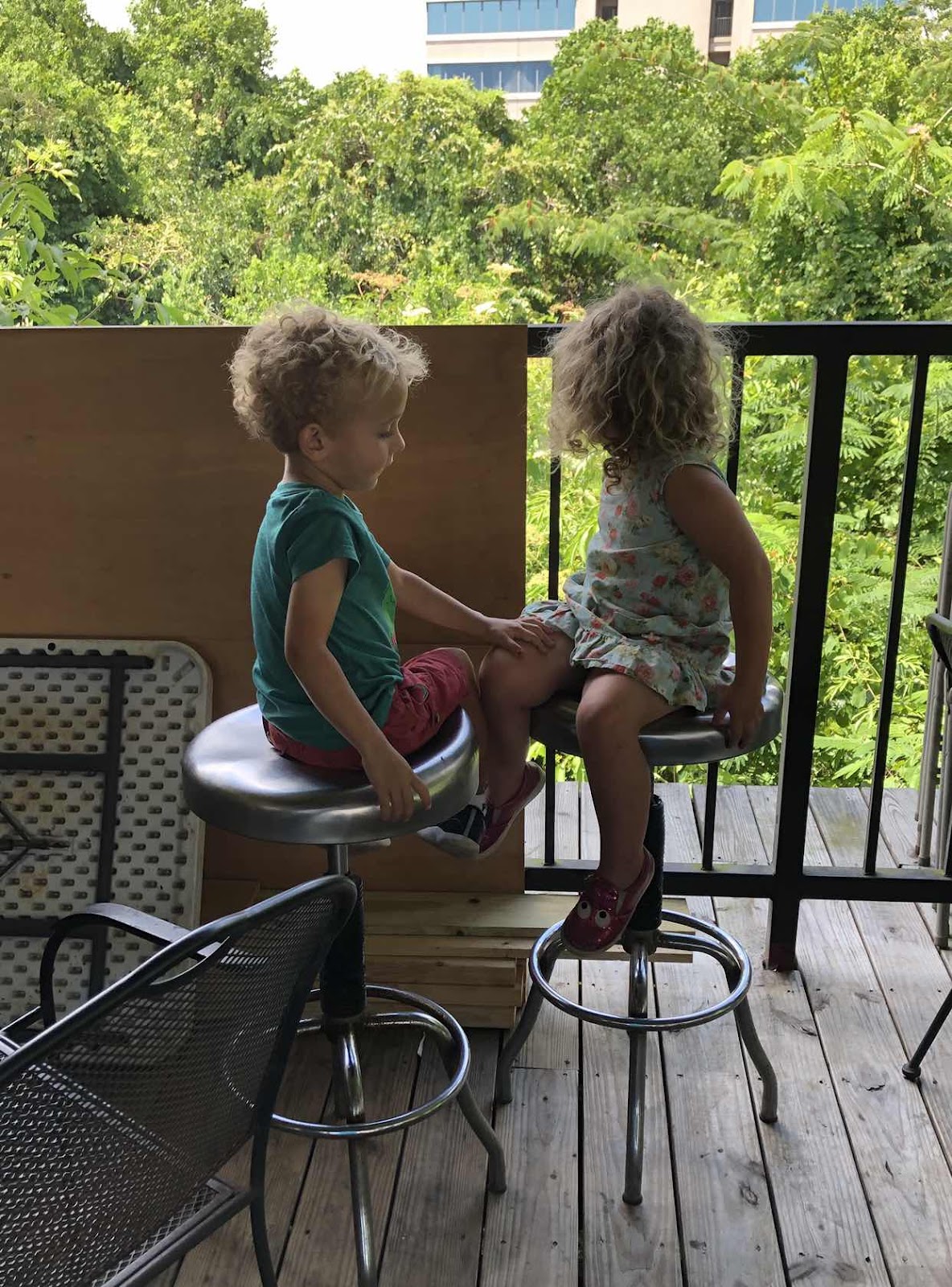 Their preciousness slays me. 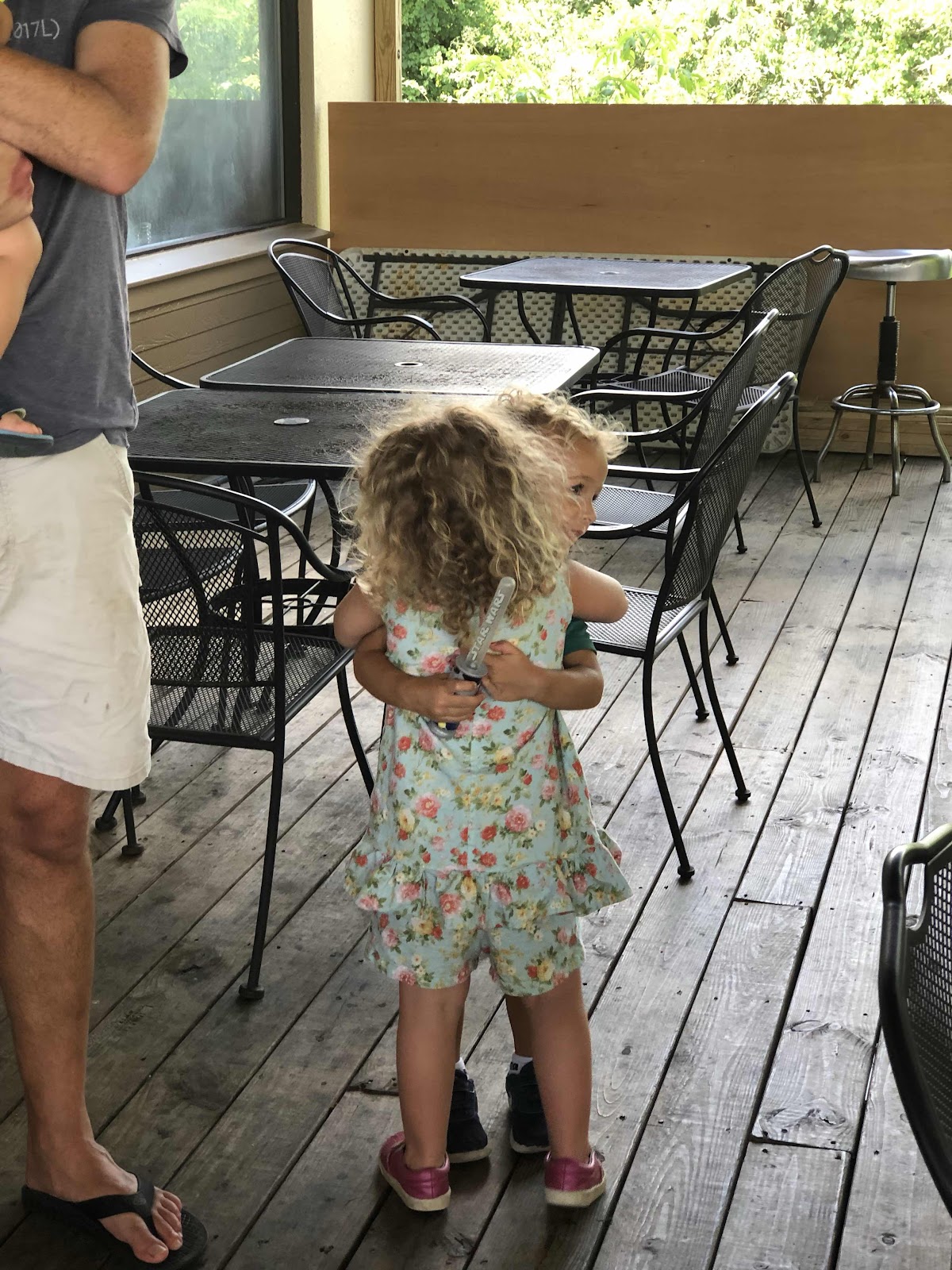 So we all ate and talked and laughed and feted our Hank. Here’s what he wrote on Facebook today.
“Turning 43 today. Things my adventures have taught me:
- teeth and knees don't heal and you don't get more
- if there is Champagne available, drink it
- kiss your friends, tell them you love them
- hold babies
- the government is often wrong but vote anyway
- we live in a world where narwhals exist, so that's pretty cool
- you can't actually be a pirate but you can dress like one if you want
- sharing is caring
- if you're evil and you're on the rise, you can count on the four of us bringing you down
- you can't read all the books, but you can damn well try
- kittens, man, am I right?
By this time next year, I'll be married to Rachel and I just can't wait. My 40s have been amazing so far. If you'd told me at 17 that some day I'd be a middleaged man, I don't know that I would have believed you. Life is pretty damn crazy, but it sure is worth it.”
I love that boy so much. That man, actually. From the moment of his birth he’s been teaching me in the most profound, amazing, and generally highly entertaining ways. I wouldn’t be the person I am if he hadn’t been born to me and of course that’s a ridiculously obvious thing to say but it’s simply the truth.
Also? He is beloved.
The Hank Fan Club has countless members.
So that was lovely and by the time we’d all hugged and kissed good-bye, it was after three. I went to the New Leaf and got some arnica gel for my husband and came home and did things around here that needed doing including calling the phone company because our landline and the internet were both off. I still had (have) the watery eye and a bit of an ache and got so frustrated while trying to navigate the auto-help thing that I ended up screaming, “NO! NO! NO!” and hitting zero in desperation which took me immediately to a human.
It would appear that there’s an outage and it should be fixed soon. Ish. I’m writing this on my phone.
All day I’ve been carrying such sadness in my heart about Spencer. The letter I wrote was to Marilyn. We wrote so many letters back and forth over the years but this one was so hard. What can you say?
I love you. I love you so much. I’m sorry.
Basically, that’s all there is.
I wonder if my eye and the headache aren’t really just the places I’m putting my grief rather than the sinus problem I’ve been suspecting. I don’t know. I do know that if I started crying it would be such a relief but I just keep sucking it up. Which- well, could explain the discomfort.
I’ll try to publish this now. I may have to wait until we get our WiFi back. We’ll see.
I used to say this thing that now makes me cringe. It was, “All will unfold as it should.”
Now I just believe that all will unfold as it will. Ain’t no shoulds about it. Besides- who gets to decide what should be the shoulds?
Sometimes I wish it was me but it’s not.
And frankly, that’s a relief.
Be well, y’all. And believe what Hank said- Life is pretty damn crazy but it’s worth it.
And oh yeah- kittens. Yes, Hank, you are right.
And I adore you.
Love...Ms. Moon