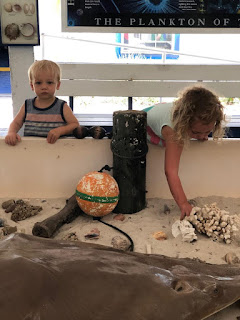 Oh, what a place of wonder and magic the Gulf Specimen Lab is!
Honestly, it's pretty funky and there is just about the perfect amount of things to see and touch and be amazed by and then you're done and the kids haven't entirely lost their shit yet and you can figure out where you want to go to lunch.
But it's a very big deal around these parts. When we got there a little before noon, there were two school buses parked out front and the place was packed. We waited a little while before even trying to get into the gift-shop/pay area because it would appear that every child who had been on those buses was buying a souvenir. Finally the groups loaded up and we went in and I bought a year's family pass which got all of us in except for August and Maggie, and of course Levon was free.
When you first walk into the tank areas, there are touch-tanks which the kids and yes, grown-ups too, can reach in and actually hold a sea urchin or a hermit crab or a scallop or a conch of one sort or another.
Let me stop here and tell you something. "Conch" is pronounced "Conk."
Period, the end.
Don't you dare try telling me about some conCH salad you had in the Bahamas. Okay? For some reason this really annoys the fuck out of me.
But, back to the touch tanks. There are also sponges and sea pork and other things that may or may not be animals. I'm sure I should know all about this but I don't. There are big, big tanks with nurse sharks and various fishes in them. And rays and skates and eels. Lots of eels in one tank. Eels are a little scary although they look like beautiful sea-dragons when they swim. 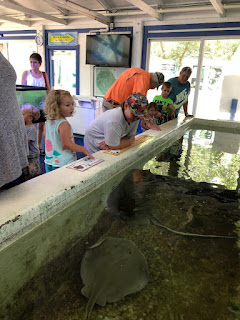 The rays will come right up to the edge and even stick their heads above the water to look at you to see if you have any food for them. They're a friendly critter.

Levon was not quite sure what to think about all of this. At his age, everything is rather mysterious, I think. 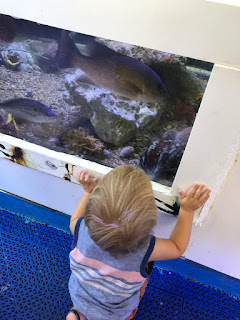 I loved watching my three little blond babies squatting down to look into tanks to see what wonders they might behold. 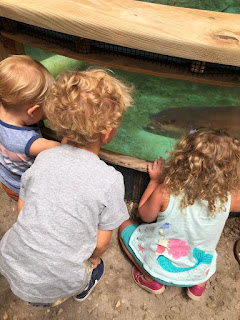 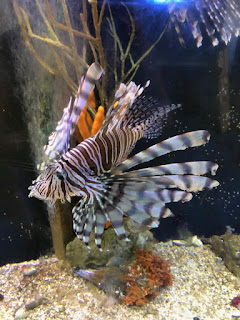 They are almost unbearably beautiful and also, they are a horribly invasive species which have taken hold from the Caribbean to Florida to the coast of North Carolina. Those beautiful fins are filled with a neurotoxin and they are way too good at cleaning out the native species. They've become a very big problem in Cozumel and they have tournaments to see who can catch the most of them. They are starting to get a grip on the problem, I think, and although I've never eaten one I hear that if properly handled and prepared, they are delicious. Even knowing all of this, I was somewhat astounded at how graceful and fancy they are. I've never seen one in the water up until today and I am still thinking of how elegant they are, how sensuous in the way they move.

The octopus may have been my favorite thing there. This one is a common brown octopus and we stared at it as it stared back at us.
"Wow," I almost whispered. "Talk about aliens."

Even though the marine lab is indeed a small and funky place, I always get a sense of almost spiritual peace there, even with all of the kids running about and using their outdoor voices. Jack and Anne Rudloe, who started the business which led to the place we visited today were absolutely passionate about getting the message out to everyone they could concerning conservation and ecology and the incredible need to maintain the systems of the sea for all of its inhabitants and for all of us as well. Anne, who was not only a scholar but also a Zen Buddhist, died in 2012 but Jack and their children still fight the good fight and educate thousands of children as well as adults. They both wrote for National Geographic and other magazines along with their share of scholarly papers and also beautiful books. I've written about them before.
I think you can sum up Jack's respect and love for the environment by how he releases sea turtles that have been healed and rehabilitated by the specimen lab. He dresses up in a suit and tie as he wades into the sea to return them to their mother-ocean. 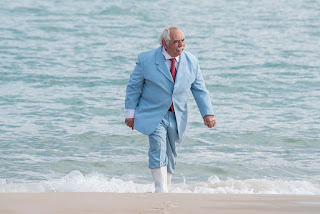 If that picture doesn't tug at your heart I'm not sure we can be friends.

All right. A few more pictures. 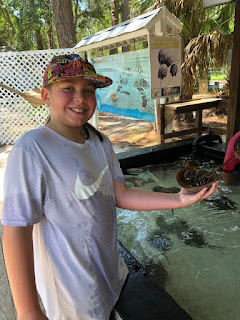 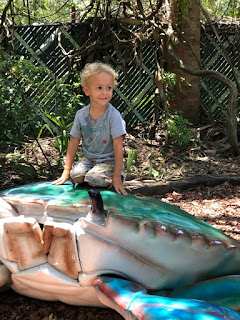 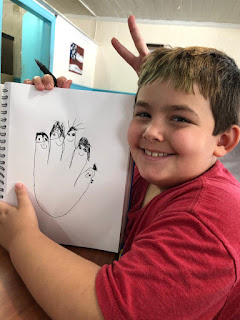 Gibson holding up a picture he drew while we were waiting for our delicious North Florida seafood lunch. He is carrying his drawing pad and a pen around with him and this delights me more than I can say. There is no one like Gibson.

And now Mr. Moon is home and did indeed catch some red snapper. He says that the seas were very rough today- five feet or more- and that no, he did not sleep well last night. Hopefully, he will sleep tonight because we've got August and Levon coming tomorrow to hang out while their parents get ready for their trek up to Asheville for the summer. So it will be lively around here for sure.

Sometimes I just feel like my life is almost too full with responsibilities and things I need to do and things I feel like I should do and things I know I'm not doing that I should be doing and even my refrigerator is too full- I can't find a thing in it. And my kitchen center island is cluttered and full too, spilling over with tomatoes and eggs and love notes and magazines and I think, "Oh Lord. If this isn't the most ridiculous third-world problem I've ever heard of, I don't know what is."