We're home and it's like being in a different world after three days of rain here and the frogs are singing great tuneful choruses of orchestral, terrestrial and sublime music and I just went out to the garden in the almost dark and found squash and more baby tomatoes and peppers and I don't even know what. I was in a hurry to get to the chickens and shut them up and then get back to the house and get unpacked and get supper made and I need to make Mr. Moon's smoothie for tomorrow and a lunch for him too and it's already after nine and it's like every bit of the letting-go of it all that happened this weekend on our little trip hit its head on a big brick wall and I'm stumbling.

On the way home I checked Facebook to discover that our dear friend, most talented musician, and amazing human being, Spencer Bohren died last night.

He was diagnosed with a particularly horrible cancer situation at the end of last year and we knew this was coming but the finality of death is never easily taken in and that's probably the wall I'm talking about.

I've written about Spencer and his wife Marilyn quite a few times. Here's a post I did when they came to visit a few years ago.

My heart is so filled with sadness. Not just for Spencer but for his family. For the kids and for Marilyn, his wife, who is absolutely one of the most beautiful women I've ever known and whose life has been completely wrapped with Spencer's forever.
I just can't even contemplate what this loss means to her and to their children.
But it's also a loss for the world. Spencer was beloved on many continents for his music, his grace, his joy in life, his personable ways, his storytelling, his very being. And with every bit of that, Marilyn was right there, as much a part of it as he was. Ask anyone who knew him- they'll tell you. Facebook is filled with messages of love and sorrow and respect for the whole family. 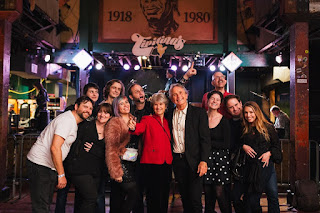 That's a picture that was taken fairly recently at Tipitina's in New Orleans where the Bohrens made their home. The community had gotten together to throw a huge party for Spencer and if the pictures are any indication, it was a most joyful celebration. That's Marilyn and Spencer and their four children, their spouses and partners, and two grandchildren.

Well. I better get to it.

I'll catch up on your blogs tomorrow. Or at least I'll try. It's Hank's birthday tomorrow and that will be a part of my day, of course.

Take a breath. Let it go. Be grateful.