Grandchildren And Food. What Else Do You Want? Late afternoon shadow in the library.

We have had a perfectly lovely day with Levon and August. They got here about lunchtime and I made peanut butter and jelly sandwiches with apple slices. Levon asked for milk. So did August.
"Cow milk," August said. These days it's good to delineate exactly what kind of milk you want. There's your almond milk, your rice milk, your soy milk, your I-have-no-idea milk, and of course in some households there can be mommy milk.
Levon likes that kind the best but he likes cow milk too. So does August.
Levon is a fine little man and he was as happy today as he could be. He sort of likes me now. And his Boppy. I love the way he says, "Yes," when I ask him a question. It's so solemn and I'm so unused to little guys saying yes instead of no.
I discovered something he really likes today. Back scratching.
Let's face it- who doesn't love to have their back scratched? We never realize how itchy our backs are until someone scratches ours for us. So I scratched his for awhile and when I quit he hunched over and said, "More," and so I scratched it some more.
When it became obvious that he was getting tired I texted Jessie saying I had no idea how to get him to take a nap. She wrote back that I should give him a little something to eat, then some milk (cow) and then give him his purple shovel and put him in the bed and tell him it was time for a little nap.
"Ha-ha!" I thought. "Sure. Right. That'll happen."
Whatever. I gave him some food and then some milk and then I put him in the bed with his shovel and a few stuffed animals and told him it was time for a nap and by god that kid laid down and fell asleep. 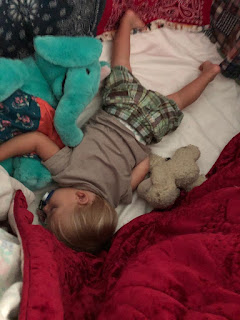 Honestly, I didn't even know this was possible.
And he did not let go of that shovel the entire nap.

August is just about glued to his grandfather. They watched some TV, they played Wii sword fighting, and then they fixed the lawnmower and August sat on Boppy's lap (with ear protection) and they mowed. When that was over he and Boppy both needed showers in the worst sort of way but before they got clean, they sat on the back steps and shared a Powerade which is something that August has never had in his life.
He loved it.
"What are you giving him?" I asked Mr. Moon.
"We need it!" said my husband. "We're hot and thirsty."

So. That's what's been going on here. We've read a few books but August has a hard time tearing himself away from Bop. Levon rode the horse. 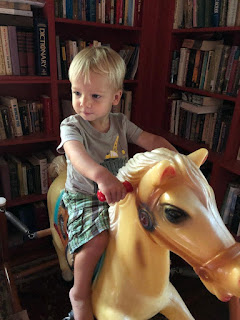 But now Jessie has come and gone to pick up Levon and I need to get supper ready because I think that August is going to be ready for bed before too long. I'm going to cook some snapper and real grits, the kind that take almost an hour to cook. There will be vegetables, I promise. Meanwhile, the two men are making popcorn to sustain them before the fish is ready. 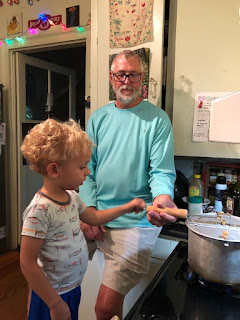 FSU is about to play some baseball on the TV and they need that snack to keep their strength up to cheer.
I guess.

And tomorrow is Father's Day and today is Jason's birthday and so everyone will be here for a brunch in the morning. Or, as I like to say, a brunch-like activity. Jessie bought a Costco cake and it's out in the refrigerator in the garage. I think this is our new tradition, started last year by Vergil who really wanted one of those giant cakes. There will be watermelon and sausage and bacon (oh god, I know) and pancakes and eggs. And cake.
Food. I really do talk about it too much.

Here's a picture of Jason and Maggie that Lily posted on Facebook. 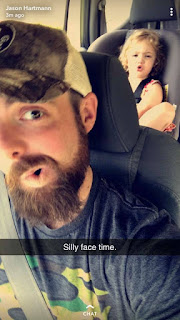 Have I told you lately how much I love Jason?
Well, I do.

I sure do have some fine men in my family and I sure do appreciate them.