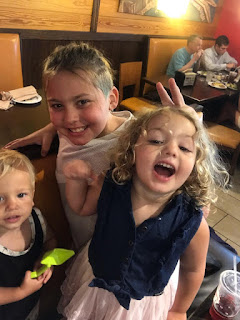 I'm running late, late, late tonight and feel a bit frantic. A woman I know who used to live next door came out for me to show her where everything is because she's going to housesit and animal-tend this weekend for me. It was so good to see her and I'm glad she's coming because she's had chickens and has lived in Lloyd and isn't afraid of critters or old houses. She did ask me if this one was haunted because the one she lived in next door was. I told her I'd never had any indications at all that it is and that's true. There may well be spirits that live here but if so, I'm too boring for them to mess with, I guess.

I went to town today to meet up with Jessie and Lily and their kids and I have pictures. 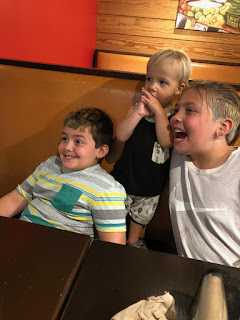 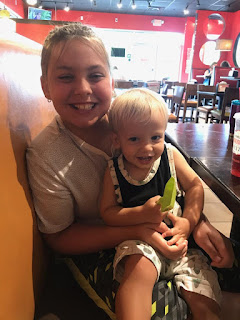 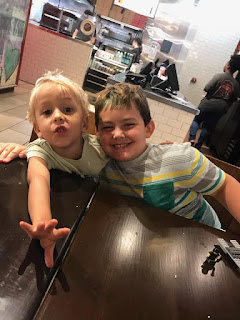 It was kid's eat free day at Maddio's and we took advantage of that situation. 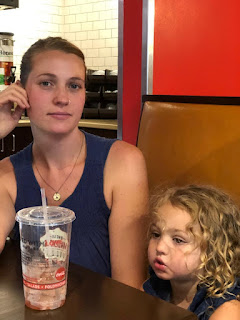 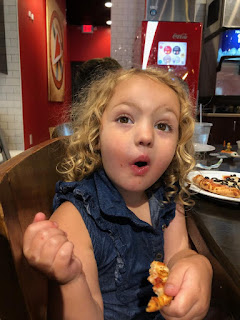 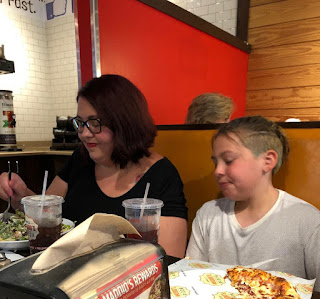 I wish I could say that I've spent the rest of the day packing but I have not. I've packed a bathing suit and two pairs of underwear.
But I have done laundry and gotten the chickens all ship-shape before I hand them off.
That doesn't sound like much, does it?
Well, it's not.

So I was walking into Publix after lunch to get a few snacks for our trip and some cheese and melons for my housesitter (that's what she told me she likes to eat) and a woman who was also walking in said to me, "All men are liars, aren't they?"
I wasn't quite sure how to respond to this.
Finally I said something like, "And what inspired that comment?"
"I just talked to my ex-husband."
"Oh," I said. "Well, yes. All ex-husbands are liars."
This seemed to make her happy.
I felt a little guilty making such a negative blanket statement about ex-husbands. For all I know, there are plenty of ex-husbands walking the earth who wouldn't tell a lie to save their souls.
But hey! Solidarity in sisterhood! Am I right?
Probably not.

It is drizzling. It has been drizzling on and off all day long. We've gotten just about enough rain to dilute the dust in a rain gauge if I had one, which I do not.
This is not what we were hoping for. And the humidity must be at least 99%.

Owen told me today that his Rolling Stones T-shirt still fits him.
I love that kid.
I love all those kids.
Did you notice that Levon has a security shovel? He carries it with him everywhere. Jessie says that when he's at home, he carries two shovels. One in each hand.
A guy never knows when he's going to need to dig something up. Or dig a hole. Or...whatever. Levon is prepared.

I kissed all my babies good-bye and told them I love them and that I'll see them when I get back.
They didn't appear to be too distressed about me leaving.