Life In The Fast Lane On A Two-Lane Road

I went out to get the paper this morning and for some reason, I just had not really taken note of the crocosmia growing around the paper box in front of the gate.
Why?
Oh hell. Who knows?
But this is what it looks like. 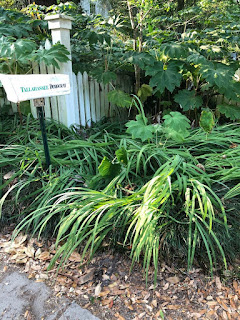 I almost began to weep.
You'll also be able to see another plant back there which is taking over and I don't even know what it is. It was here when I got here and a few people have called it a castor bean but I don't think it is because I've never seen bean one on any of them. It's gotten bigger and spread farther this year than ever before and part of that is because we never got a freeze hard enough to cut them back last winter. So they too are all over the yard, front and back. I've pulled quite a few but not nearly enough. They are handsome plants but too many is too many and there are way too many.

Sigh. Sigh, sigh, sigh.
The heat is relentless and oven-like. Not just regular oven-like. Brick pizza oven-like.
I actually got out and walked a bit earlier than usual. I don't know why I bothered. I've felt flattened and limp all day. My fig tree is splayed and drooping and looks the way I feel. If we don't get rain soon, I won't be preserving one fig. But hey! They'll be dried figs on the branch!
Oh boy.

Jessie took August to the doctor this morning. He was still running a fever and feeling so pitiful. He got diagnosed with a sinus infection and has started antibiotics. I hope they knock it out fast. Poor little guy. I went into town to drop a key off for Mr. Moon and go by Publix and wanted to go by and see him but he was sleeping and it wouldn't have helped anything if I had. They might come out tomorrow. He can lay around here just as well as at home and I can fulfill my promise and read him all the books. Or at least all the ones he wants. I forgot to take the list I've been so carefully keeping when I left the house and so I spent my time at Publix wandering about, wondering what in hell I really needed.
Wandering and wondering. That about sums me up today.

I took the trash to the trash depot and look what I found! 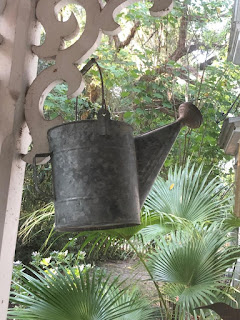 A perfectly lovely and functional old watering can. That cheered me some although what in hell will I do with it? Water stuff? That's why we have a hose. Still, I couldn't leave it there. They'd charge at least twenty dollars for one of those in an antique store. At least. It's a handsome thing to my eye anyway. Reminds me of my grandfather.

Mr. Moon and I are driving up to Nashville this weekend. He is going to be installed (?) in his high school's sports hall of fame. Yes. They have one. I think his sister is too. I want to go and I am going to go but the idea of the trip and attending one of his high school reunions is giving me a lot of anxiety. I've been to two of his high school reunions but not for, oh, seventeen years or so. This reunion is an all-class reunion so there will probably be lots and lots of people. I comfort myself thinking of the really good restaurants they have in Nashville. It's a nine and a half hour drive although that's when Mr. Moon drives it by himself. I have to stop more frequently than he does. Sitting for a long period of time is a special sort of hell for me. But I will read out loud to him and that's always fun. What was I reading the last time we took a trip? I can't even remember. Could this be the year we finally finish "Duane's Depressed"? One of my very favorite books by Larry McMurtry and third (I think) in the series started so long ago with "The Last Picture Show" followed by "Texasville." There are several more books which follow after "Duane's Depressed" but none of those are as good as the first three were. Still, "Rhino Ranch" is not bad. It's amusing and it's always a treat to revisit the characters that McMurtry creates. I've always said that it's like he has a magical peephole with which to view the worlds where his characters live and he opens it up and reports back to us on their doings.
It's all about character for me.
Speaking of which, and I'm almost embarrassed to tell you this- we re-watched Deadwood: The Movie last night.
I think I cried harder at the end this time than I did the first.
I was just a weepy damn mess.

I am sort of a damn mess in general these days, weepy or not.
But I can still cook. My shrimp salad last night was very fine and tonight I have made an eggplant parmesan. I have three eggplant plants in my garden and although they have given forth with their beautiful pale purple blossoms, I have not seen one eggplant but I think the anticipation has set my mouth to water so today I bought one of those beautiful things and sliced it up and dipped the slices in milk and egg and coated them with flour and a little panko and baked them in the oven and made a sauce with so many vegetables including carrots and spinach and zucchini.
I think it will be good.

Here's a story- this morning when I went to tend my chickens, I lifted the lid on the baby coop to give them fresh water and food, and little Violet who raised a clutch of eggs herself a long time ago, jumped right in there. She had not left the big coop with the other chickens when I opened their door and gave them their scratch and I could tell that she was determined to get in with those babies. Darla went nuclear though and jumped on her and Violet flew out of the coop as quickly as she could. I keep saying that Darla isn't the brightest bulb in the chandelier but she sure is protective.

Wow. My life is just unbelievably exciting, isn't it?
Tomorrow I may announce my candidacy for president. At which point pigs will be flying out of my butt.