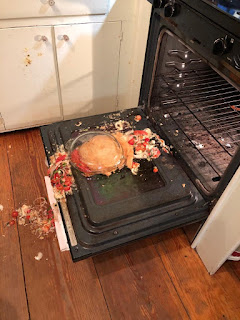 And that, my friends, is what happened to my tomato pie last night. Well, actually, it obviously didn't just happen. I dropped it, sliding it back into the oven.
But. Because most of it landed on the oven door instead of the floor, I was able to salvage a of it and by god that slightly smushed tomato pie was the best tomato pie I ever ate. Mr. Moon said so last night and then again today when he ate some for lunch. The pastry may not have looked that pretty even before I dropped it but it tasted perfect.
So. There you go.

Okay. I had just about the worst anxiety attack I've ever had, getting there, sitting in the office, and then going into the exam room. Feet and hands tingling. Inability to concentrate. Those were the two main symptoms. I tried to practice a little mindfulness to bring myself back to the present but my brain laughed at that. I told the girl who took my blood pressure that it was going to be bad and it was pretty bad. Not horrific as in "You need to go to the emergency room right now!" bad but, "Okay, yeah, well, that's not so good."
But they know me by now.
I didn't have to wait long before the darling doctor came in.
"How are you doing?"
And I told him that I was having an anxiety attack. Just flat-out said it. I also told him that I wasn't sure he grasped the full meaning of what I was experiencing and he didn't laugh at me. I had taken an Ativan but it hadn't kicked in yet or else what I was feeling was simply too strong for the drug to have much effect. But what that sweet man did next DID have an effect on me. He sat down and said, "You won't believe what I've done. You'll just die!"
"That would be fine," I told him. He did laugh then.
He got his phone out and started going through pictures and showed me a shot of some baby chicks and a duckling.
"You got chickens!" I said. "And ducklings?"
"And ducklings," he said.
And then he proceeded to tell me all about the chicks and how much his son loved them and how funny the ducks were and that he and his wife were going to have another baby soon and then I told him about how when I had two ducks, both females, they loved having sex with each other and he laughed about that too. I mean, he spent a good ten minutes at least talking with me about chickens and then he got me up on the table (he never makes me undress) and took my blood pressure again and it had come down a startling amount and he did a few doctor things which he does so gracefully and slyly that I barely realize he's doing it. He asked me if I had any idea why I have such a neurosis about the doctor's office and I told him that I did not but that I certainly wish I did so that I could do something about it. I told him that I can remember having to be held down in a doctor's office to get my flu shots and that also, I can remember going to the doctor with my mother for an appointment for HER and being so anxious (although I had no word for it) just being in the doctor's office that I would start to get all of these psychosomatic symptoms to the point where I thought I might die.
It's all tangled up and who knows? Who knows? Not me.
When he was finished with the official doctoring he said I could sit back down in the chair and then we discussed my cholesterol which is for some unknown reason better and we talked about politics and got into even more distantly related topics like nuclear war and climate change and how he worries about the world for his kids and I worry about the world for my grandkids and we talked about aging and a whole lot of other stuff and eventually he said, "Okay. If you promise me you'll call if you need anything, I'll see you next year."
And that was that.
Except that I hugged him, teary as I so often am, and said, "I just love you," and he hugged me back and said, "The feeling is mutual."

And that was how it went.

After I left the office I met up with Lily and her three babies and Hank and Rachel and our friend Lauren at Tan's which I have discussed before. It's a relatively small buffet place but the food is so good and they have all sorts of Asian-inspired dishes and now they have sushi too and of course, this is the place with the dessert freezer which is filled with things like Eskimo pies and little ice cream cones so we all love it. I don't care at all about the ice cream but I do so love the Mongolian tofu and soups and curries and it was fun. The children were good and I was so happy to be there with them. 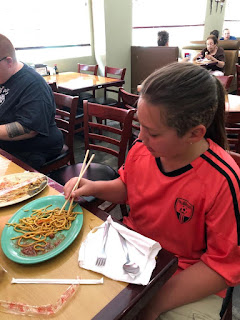 My Owen and his beloved noodles.

And then I came home and absolutely and literally crashed and slept for an hour.
And it's over- that appointment is over and I don't have to think about any of it again for another year unless I get ill in some way and in the...what? Two years? Three years? I've been going to Dr. Zorn, I've never once had to call about an illness or a problem.

I still feel a bit insane.

This must sound so ridiculous to most of you.
SNAP OUT OF IT! you might want to say.

Honey, if I could, don't you think I would?
Ain't no one wants to feel like this. Not a soul on this earth.

I'm going to go fry a little whole red snapper.
I'll try not to drop it.