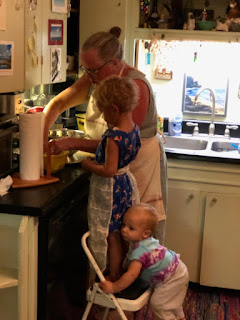 There was so much of this sort of thing going on here for three days. At that particular moment, August was helping me make supper. He was smushing up the tofu and then smushing the garlic into it. He also helped me chop green onions with a butter knife and I have to tell you, the kid has skills.
And Levon? Well, he was trying to climb which is what he does and he was trying to do what his big brother was doing which is also what he does and he probably wanted to see what was going on.
Oh, those boys, those boys, those boys.
What a gift it was to have them here for a few days with their mama. It reminded me of some years ago after a hurricane and Lily and Jason had no power but we did and so they came and stayed with us and Owen and Gibson still remember it as a big ol' fun party.
So much laughter. 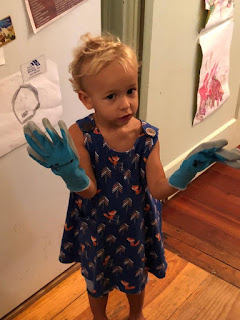 August getting suited up to help me clean the hen house. He asked for small gloves but I had none. 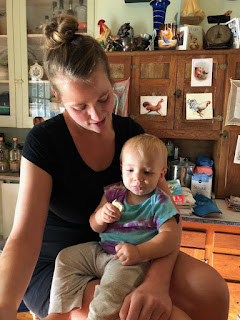 Levon eating bread and humus. When he wants some food, he smacks his lips and he and his mother and I played pretend eating yesterday for the longest time. He had a spoon and would make the lip-smacking noise and then offer the spoon to us in the general direction of our mouths and we would make the lip-smacking sound and pretend to eat and thank him and he would laugh and laugh. 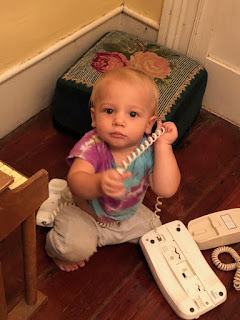 His favorite thing to do- playing with my old telephones that I keep around to plug in when our power goes out because yes, we do have a landline. Guess what? The fucking president can't send text messages on it. Which is cool. 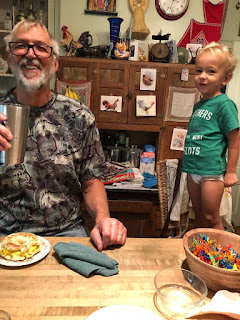 August and Boppy being amused after August had told Boppy that he could not sit in that chair because he was too big and too old.
At least I'm not the only one who's old around here.
He told me I was too old to do something the other day. I can't remember what but I told him that the only thing I was too old to do was to have a baby.
Of course, this is a flat-out lie but he doesn't know that.
The kid continues to astound me.
He wanted to help me cook again this morning and dragged a stool over to climb on.
"Hold this," he told me, pointing to the stool, "To make it stable."
Why yes, his father IS an engineer. Why do you ask?

So after three days of a house filled with noise and with activity and with laughing and with a little crying (not much!) and with cooking and eating and cleaning up and reading books and pleading with a three-year old to go to sleep and applauding him when he successfully used the potty and applauding his brother when he successfully clapped his hands and dance/music parties in the hallway


there is suddenly quiet in my house.
Mr. Moon packed up and went to Georgia this morning and Jessie and her boys packed up and left for home around noon. Vergil will be flying in tonight.
When Jessie pulled out of the driveway I didn't know whether to be thrilled at the prospect of all of the peace and quiet I was about to experience or to shout, "HOW WILL YOU LIVE WITHOUT ME?" Meaning, of course, how will I live without you?

Well, I have managed and I'm sure that they have too.

I'm happy to report that Dearie showed up yesterday morning from who-knows-where and had some bird-seed snacks and then disappeared again. I suppose she's living next door with the big flock over there. I think she was fed up with the amorous attentions of Liberace and Ringo and she's her own woman and figured out how to avoid them which was simply to avoid them.
Sigh.
But I sure was glad to see her. I sort of love that little brown jungle fowl hen.
Darla is still sitting on eggs and I checked yesterday and there were even more under her. I would love to know what the impetus is for other hens to lay eggs that the broody hen can tuck underneath herself. And how do you gauge how long she's been sitting when more eggs are added to the nursery nest every day?
You'd think I'd know this by now.

You'd think I'd know a lot of things by now. 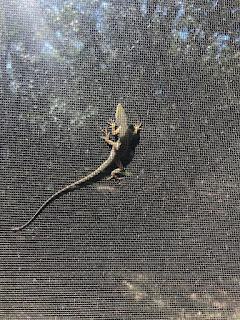 Here's a little anole that was on the other side of the porch screen today. I've been living and observing these lizards for all of my life and yet, they still enchant me.

I'm about to go close the chickens up in their relatively clean hen house and then I'm going to cook supper for one.

How strange. And yet, okay.
Quite okay.

It has been a tiny bit cooler and a tiny bit less humid and that has made a huge difference. I am grateful for that. I am more grateful, however, for having children who still want to come and stay with their mama. Jessie told Vergil on the phone last night that she felt as if she were cheating by coming over here when he was gone and not doing all of the child care and cooking and tending and everything else by herself.
"NO!" he said. "That's why we live in Florida!"
He's such a wise and dear man.

And for the political portion of the blog tonight I give you a Facebook post from Hank.

Couldn't have possibly said it better myself.