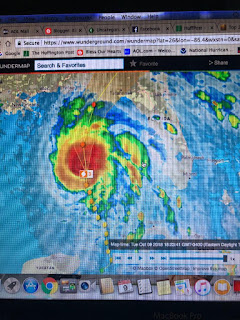 Well, despite the fact that there is indeed a Category 3 hurricane in the Gulf looking approximately like the picture above, this is what it looks like here right now. 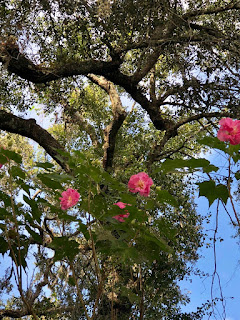 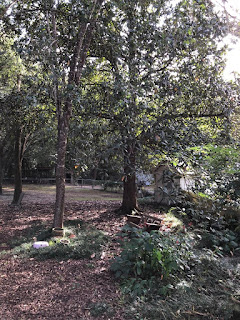 I just talked to May who said that she'd encountered people today who had just moved to the area who really think this is all a scam.
"Have them come back and talk to you in 48 hours," I said.

Still, though, I get it. I myself have been feeling like the whole thing's just a big misunderstanding or maybe a myth or maybe they've just called the whole thing off.
Tomato. Tomahto. Potato. Patahto.
I wish. 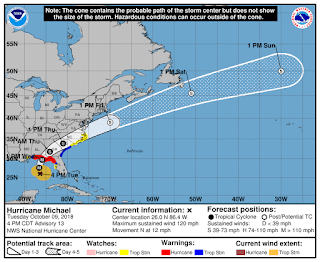 We'll probably start getting bands of wind and rain tonight. It's supposed to make landfall tomorrow afternoon but it'll definitely be affecting us before then.

So I haven't really known what to do with myself all day long. Therefore, I baked.
I baked that beautiful no-knead dough I mixed up yesterday and that was really interesting. The dough is so soft and silky and you heat up a big pot with a cover in a 450 degree oven and then you slide the dough into that and bake it with the cover on and then take the cover off to let it finish up and anything involving cast iron and bread dough is extremely gratifying to me. I can't wait to slice into it.
I also made oatmeal cookies. Do not ask me why. I would like to say they're for my husband because he loves cookies but I'm sure I'll eat some too. 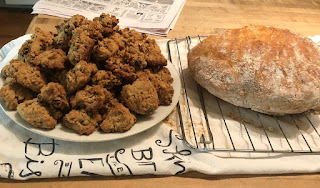 I went out to the porch to deal with the plants and studied the situation. 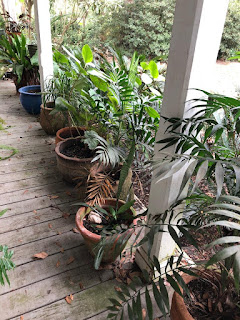 We're talking about three or four-foot tall plants in heavy clay pots of dirt. So I decided that if winds are strong enough to throw those suckers around, we're going to die anyway and I let them stay where they were. I did move the hanging ferns to the back of the porch.
Yay me.
Then I ironed. I started watching a Net Flix show called "Dancing Queen." Have you seen it? It's a sort of reality series about a drag queen who runs a dance school in Mesquite, Texas.
It's watchable.
You know what I think when I see beautiful drag queens?
I think that I really should try a little harder with make-up and clothing. I mean, those guys are GORGEOUS and they are guys. Ah well, how many sixty-four year old drag queens do you see out there? There's only so much anyone can do with make-up and clothing at this age but really- I'm not doing any of it.

After I'd ironed all of the shirts that Mr. Moon wears to work I made a spaghetti sauce. At least it has vegetables in it which will be the first vegetables I've eaten all day. And no, I haven't eaten a fruit, either. I've concentrated on the carb/fat/protein parts of the food groups.
I have a very strong feeling that I'm not the only one in the Big Bend/Panhandle area who might have overdone the stress-eating today.
I guess it's better than doing heroin but I don't know where to get any of that whereas flour and sugar and leftover pork chops are abundantly easy to procure.

So. That's what I've been doing while waiting for this storm.

The air is as still as it can be right now but honestly, it's not that sinister stillness that one often feels before a hurricane. It just feels like normal. We got a few tiny rain showers but again- nothing out of the ordinary at all.

Here's what Maurice has been doing today. 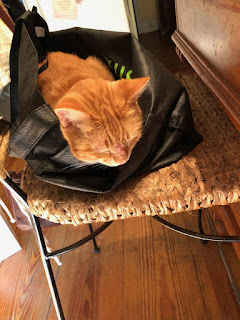 Does she know that something's going on or is she just taking the opportunity to feel more secure as she naps?
I have no idea.
In fact, it is quite obvious that I have no idea about anything.

I'll do my best to stay connected if our power goes out and unless something miraculous happens, it will. But I'm sure we'll all be fine. So don't worry if you don't see anything from me tomorrow night. I may post earlier in the day if it gets interesting and we still have electricity and internet.

Ah, life itself is interesting. And at least we'll get some rain.

Just think. If Darla's chicks hatch tomorrow they can say that they were born in a cross-fire hurricane.