I don't want to talk about it, okay?
I did talk about it. I talked and talked about it. Now it's time to accept it and try to remember that there really are good people on this planet and even in this country and yes, a lot of them are men.
I guess. What the fuck else can we do at this point?
Weep until we're blind? Scream until we have no voice to whisper, "I love you," to our beloveds? Beat our heads against the wall until we pass out?
Oh, that'll do a lot of good.

No. We go on. We love our beloveds, we tell them so. We use our not-blind eyes to see so that we can step up and speak when we see injustice. We use our heads to teach our children and our grandchildren respect for each other and to try and figure out the answers to hard stuff.

It was a little cooler today. Cool enough that I got in the garden on my knees and ripped weeds out by the roots and shook the dry dirt off of them and tossed them in my cart to haul off to the burn pile. Over and over again.
Knees in the dirt. Hands in the dirt. Head somewhere, anywhere, listening to an audio book with one half of the brain, pondering everything else with the other half. 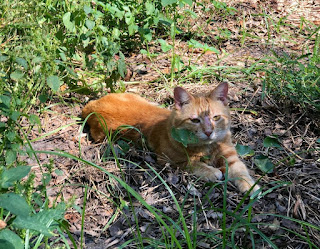 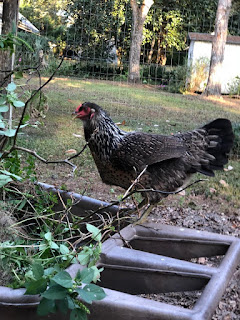 I had helpers. My familiars, my mysterious and beautiful companions who come and go as they please and because of that, I always feel honored when they appear. 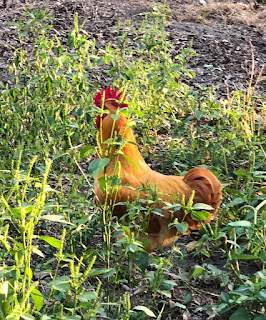 To be honest, the chickens have made the garden one of their daily stations of the cross, visiting it at least once a day whether I am there or not but my presence does not deter them and I will take that as blessing enough.

I went over to where the neighbor's chickens and goats are kept in pens which border my back yard to see if I could spy Dearie over there. I did not see her but I saw these. 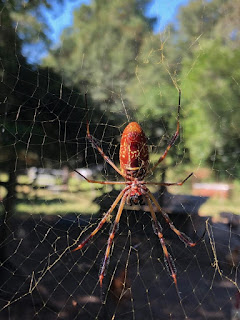 The underside of a magnificent Golden Orb Weaver. 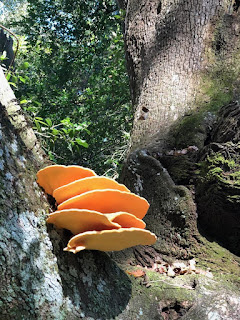 What I assume are Laetiporus Sulphureus, commonly known as Chicken-of-the-Woods. I know nothing about mushrooms beyond the Psilocybin and Stinkhorn varieties but using the Always Correct Internet as a guide, I believe that's what they are. I also sent the picture to Vergil who believes I may be correct.

Here's another thing I may be correct about (or not)- Dearie might be sitting on eggs somewhere. I looked it up (again, on the NonFailingly True Internet) and hens can go broody as soon as they start laying and she's been laying for a few months. So. Wouldn't that be funny? Wherever she is, I trust her to be wily and wise in her jungle fowl ways.

And that's the news from Lloyd today. I didn't leave the yard except to take the trash and stop at the post office. A dress I ordered from eBay arrived. It's linen and it's as deep turquoise as the sea in Cozumel. Cozumel Blue. Cozumel Camo.
Maybe if I wear it there no one will see me and they won't be able to send me home.

It's a plan. Not much of one but the best I can come up with right this second.