My Religion Is Rain And Babies And Things Like That 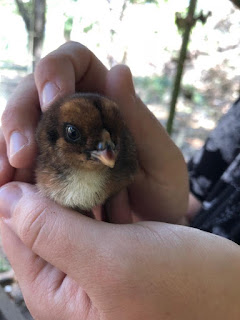 Look how cute that baby is! We're all noticing how much calmer and less skittish these chicks are than the ones we get at the Tractor Supply. They haven't been traumatized with being transported with huge numbers of other chicks and set under heat lamps in a store but have been with their mama since they hatched with her comforting cluck and protecting feathers. Tiny little dinosaurs with great big eyes and feet. I just feel so gifted by them.

I didn't get a thing done today but it was a very good day despite that. Jessie and the boys came over this morning to see the new babies and they were suitably impressed. And then- back to the tractor. That tractor has gotten more play time in the past few weeks than the play set ever did. They should market those things for kids. 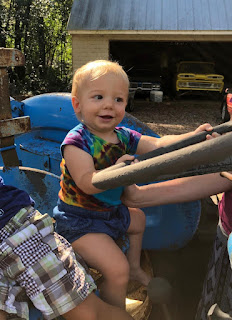 The boys and the girls, the babies and the big ones, they all love it. It might never move another inch and will still have been the most fun thing ever. They make tractor noises and steer, try to shift the gears and press on the pedal. "What's this?" August asks, over and over while pointing to one thing or another. "Don't know. Ask Boppy," we tell him. For a relatively simple machine, tractors have a lot of switches and handles and levers and...stuff.
No one could ask Boppy today because he's back up in Georgia but I'm enjoying my alone time although I've only had about two hours of it so far due to visits from Jessie and Hank and Rachel. They wanted to come out to see the chicks too, and so they did. 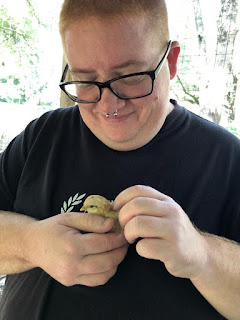 Hank holds babies! Again! He loves babies. My family might be the most baby-loving family on earth. But let me just say, if you've never kissed a baby chick head, you don't know what you're missing.
Here's Rachel holding a baby. 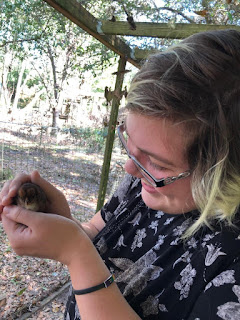 That's the one in the picture at the top.
We talked about how in the world we're going to name all of these chickens. Hank suggested we give them all dinosaur names.
Tyrannosaurus Rex.
Stegosaurus.
Pterodactyl.
And so forth.
Or, you know- we could shorten those names up. Rex. Steggie. Pterry.
We'll see.
It's going to be so interesting to see what they look like when they get their feathers. Like human babies, chicks change so much in the first few months.
Meanwhile, they are a delight and Dearie is taking such good care of them. I chopped up some apple and grapes and spinach to supplement their starter feed. They loved it. And we watched one of the tinies scratch up a bug and eat it, all on her own.
I felt so proud!

After we'd done all the backyard stuff we wanted to do, we decided to head up to the Hill Top, the little country store with the restaurant attached. Restaurant? Cafe? I don't know.
Whatever you call it, it's good.
We got everything from a Reuben with fried pickles to a chicken salad salad (me, of course) to a fish and shrimp combo dinner with hushpuppies, fried okra and beans. I swear that one of these days I'm going to get some barbecue there. People were lined up waiting to order and they either took their food with them or else ate it in the air conditioned room out back that has four tables in it or under the big awning at a picnic table. We chose the outdoor picnic table option. It's the kind of place where there's a baby in a play pen standing right by the door while his mama cooks and his granddaddy runs the register. The kind of place where in the unisex (only) bathroom, there's deer corn on the floor which probably fell out of someone's boot or pocket. The kind of place where there's a long bench in front of the cake and salad display case to sit on and wait for your food. The kind of place where, when they make the red velvet cake, they use ALL the red food coloring. The kind of place where you run into your next door neighbors that you haven't talked to in three months. The kind of place where, well yeah- you can get fried pickles with your Reuben.
In other words, awesome.

So we ate our lunches and it was all delicious and then Jessie went on home with her boys and Hank and Rachel came back here with me and we visited for a few hours. While they were here, it suddenly began to pour rain and we were sitting on the back porch and it was absolutely wonderful. The air smelled so good and for awhile the sun was shining even as it rained and the drops of water on the magnolia leaves were like fairy lights with the sun shining through them. It's supposed to get down into the upper fifties tonight and I am waiting for that precious coolness to follow the rain. It has rained again since Hank and Rachel left and I have doors open as well as the window over my bed. I remember the night of the hurricane when we had no power and what it felt like to sleep under that open window. It was cool that night too, and every now and then a breeze would come through the window and I would feel it on my skin and think about how incredible that felt. Don't get me wrong- I love my air conditioning and my fan but to have that coolness come so unexpectedly was a sort of blessed bliss.
Perhaps there will be more of that tonight.

For a few minutes this afternoon, as Hank and Rachel and I watched the rain fall and the light shoot through the drops of water, as we took in the sound of it, the smell of it, we all fell silent. For those few minutes we were mindful. This happens so infrequently, or at least it does in my life. And I should know better than to let any of these moments pass unnoticed. These are the holy moments and they are far more abundant than we recognize, I think.

I'm going to ponder that. I'm going to try and do better to pay attention. To be more present in the moment, as they say.

Right now the rain is dripping from the overhanging tin roof. I can hear the wet swish of the tires of cars passing every now and then. An airplane drones to the south of me. The sun has set and it is dark outside. Life is within me and it is without me.

I take a breath, I let it out.

Time to go put up the chickens.