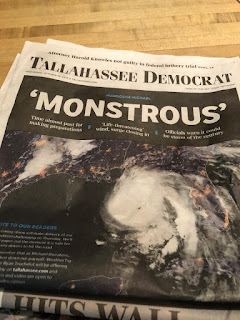 Just love to wake up to newspaper headlines like this, right?
My god.
Well, it is a big storm. Ain't no two ways about it. We're not getting much of it yet and probably won't for several hours. My favorite weatherman says that the heaviest parts will probably be between lunch time and supper time.
He's so calming.
Looks like the storm is going to land west of Apalachicola (which is already flooding) and yes, we're going to get some hellacious weather but the fear-mongering going on is ridiculous.
I hope.

So. What have we been doing around here?
NOT WATCHING ANY WEATHER REPORTS BY ANYONE BUT ROB NUCATOLA!
That's what.

Mr. Moon is cleaning up around his construction area which is good. Very good.
The dump is actually closed but they always leave a gate open which is ridiculous but that's how we roll in Jefferson County.

I've filled up the bathtub.
I'm about to run the dishwasher while we still have power.
I'm planning to read all my back-issues of the New Yorker and if things really get dicey and scary, I'll start rereading Lonesome Dove for the tenth time. Or maybe Keith Richards' Life.

My kids all seem safe and secure.

The rain is picking up and occasionally we get a gust of wind but nothing serious.

As I said last night I'll be in touch as long as possible and then as soon as possible.

Don't worry about us. Seriously. It's the people on the coast west of here who are really going to be devastated and a great many of them have evacuated. I think of how every single person over there has to make that plan and then put it in action.
Or not.
I read about people who refuse to leave their barrier island homes and I just wonder what in the world they think they're proving?

I'll check in later if possible.