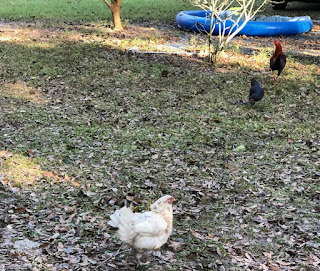 This morning I did what had to be done and lifted Darla off the nest and set her down in the yard and  tossed those stinky eggs into the woods.
She fussed for a second and then immediately began to eat the corn scratch on the ground in front of her and then ran to the water as if she hadn't eaten or drunk in weeks. Which of course she mostly hasn't. When I cleaned out that nest box later I found food that I'd put in there for her, untouched, and the waterer I'd set in the corner of the box didn't appear to have had much sipped out of it either.
I have no idea why her eggs didn't hatch. I know that at least one was fertile, as I said yesterday. Was it too hot in that nest? According to what I've read on the internet, I should have examined the eggs to see what was in them but I just could not bring myself to do that.
It was what it was and now Darla can be a chicken again instead of an incubator. She can eat and drink and run around and I'm sure she'll moult, losing her feathers as her sister Dottie has been doing. Dottie looks worse than Darla does, to tell the truth, and the yard and hen house are littered with white feathers but they'll grow back and she will be fine and pretty again soon.

It's been a bit of a weird day. I took another walk and yes, I took more pictures of those decorations. 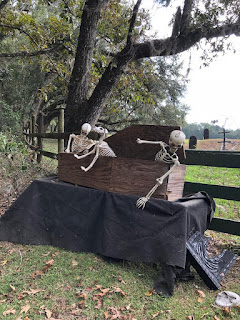 It would seem that skeletons have branched out from merely human remains. There are now dogs and cats and even, as you may be able to see below, dinosaurs. 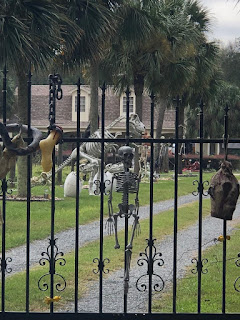 Honestly- I want one of those in my front yard. You know me, though. I'd probably keep it up all year long. 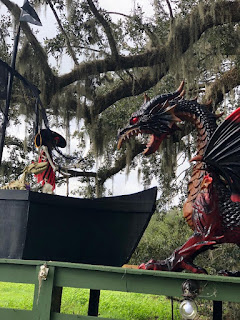 Here's another picture of the dragon because it's such a beautiful dragon. I do love the brave pirates wielding their swords to defend their boat from his dragonly advances.
Obviously, I'm a bit obsessed with these decorations.

Hank sent us a link to the government satellite imagery of Dog Island after the storm. It would appear that we still have a house. 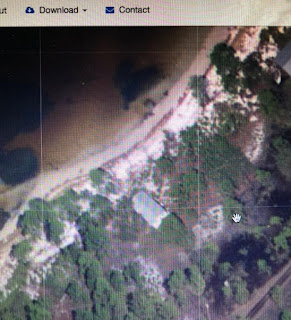 The bay looks horrible but after a storm like that everything gets kicked up and stirred in. We have no idea if the tide rose up over what was left of the dunes and breached the house. We'll just have to see. It would totally break my heart if the original orange and brown and beige shag carpet had to be ripped out.
Hahahahahahahahahahahahahaha!

This afternoon I've worked on a Monkey Man for Levon whose birthday is coming up. I feel a little puny and so sitting on the couch and watching crap TV while stitching up legs and arms out of a sock was a perfect thing to do. Mr. Moon has taken a car down to Orlando for the auto auction there and is picking up another vehicle that he is going to deliver to a customer tomorrow. I hate it when he does that drive down and back all in one afternoon/evening but he always assures me that he knows when it's time to pull over and take a little nap.
He's an excellent power napper.
But of course I'll be worried until he gets in bed sometime tonight.

And really, that's all I have to say this evening. I've let the world go on around me and without me.

It would appear that it is still spinning around the sun.