Grandchildren And Other Blessings 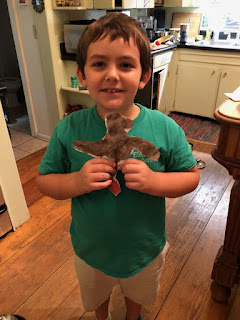 Gibson posing with one of the many dragons he painted and cut out while he was here.

Last night's sleepover went well. Thank god for frozen pizza, martinis and chicken wings. I did not even cut up a carrot for dinner. I didn't even pretend to be healthy.
The children did not seem to care. Nor did Mr. Moon. 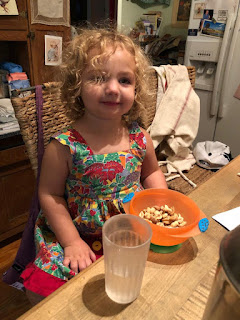 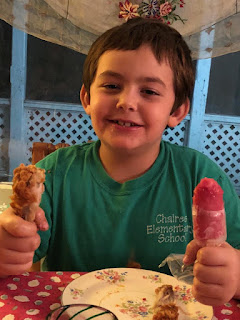 There were fruit Popsicles to balance things out. As you can see, Gibson is all about balance.

Owen was so sweet and helpful. He's growing up too fast. And Gibson is getting funnier and funnier. He's telling jokes now and they're actually good jokes. Here's an example:
"Did you know that the eyebrow brush and the lipstick had a fight?
Don't worry. They maked-up."

Get it? Make up?
He's also making deliberate puns which I've never been able to do once in my life. He slays me, that kid.

And Magnolia. Well. She's my cuddly little peach of a girl. She woke up at about five-thirty this morning and nothing would do except for her to get in bed with us and cuddle me. This means I have to hold her to me with my arm around her. That was fine but when I absolutely had to change positions she was not happy. "Mer! Cuddle me!"
I convinced her that I was right there, even if my back was to her and we both fell asleep again.
Here she was this morning on the tractor. 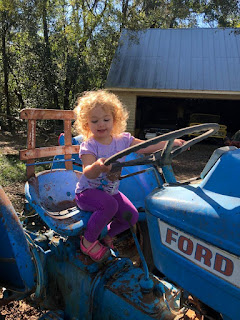 Is she not a sunflower?

I made us all a huge breakfast and Jason joined us and after they all left, Mr. Moon and I tidied up and I did a lot of laundry and cleaned the hen house and no, no sign of chicks yet. I realized (after Jessie told me) that I had gotten my dates wrong for the estimated time of hatching. Tomorrow is 21 days. Darla's still sitting tight on that nest.

Jessie and the boys are here while Vergil is sitting in a deer stand, trying to get his venison for the year. He is serious about this. He hunts to get good meat and that is that. And he butchers and processes it and then freezes it. August is thrilled to be visiting again. Levon seems to be happy about it too. I needed to take the trash but waited until they got here because August loves going with me so much. We always stop at the post office which is also an adventure. Then he got to ride on Boppy's four-wheeler with him. 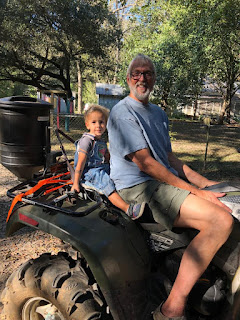 This was thrilling, a bit worrying, and an intellectual exercise in trying to figure it out for August. He is a young man of great thought. But mostly, he loved it.

And then, because he's so cute, I have taken pictures of Levon. 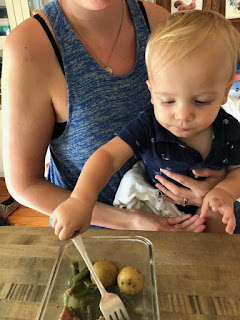 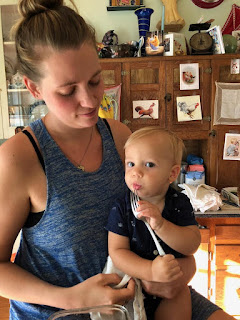 I offered a smaller fork but his mama said that he was doing pretty good with that one. 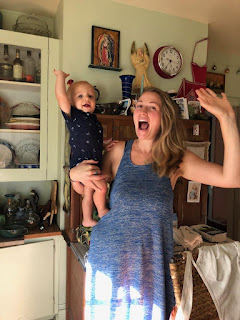 He goes for the gusto. He stands on hips.

And so the day has gone. I got a lot done and feel the better for it. I've got things put back together for the most part and things are orderly, or as orderly as they get around here.

May and Jessie have power now. Hank and Lily do not. Supposedly, hopefully, there will be restoration by tomorrow afternoon. The area is still reeling. No one dares to complain about any sort of discomfort because we have all seen what others to the west of us have suffered, are suffering. Losing electricity is nothing compared to losing everything.