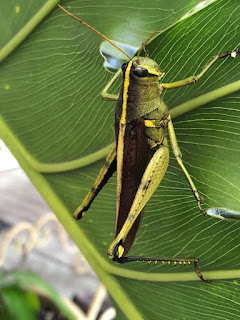 I took this picture of an immature Georgia Thumper grasshopper (also known as the Eastern Lubber) when I got home from my walk today. I should have held a finger up there for you to get some perspective but rest assured that the damn thing is huge. That's a giant split-leaf philodendron it's on. Those suckers can eat right through your plants, both ornamental and edible. I flipped it off the leaf after I'd taken its picture as the chickens were about and I thought maybe they'd catch and eat it but I didn't stick around long enough to see.

I had a really nice day today.

Jessie and Vergil were out and about and we met up for lunch at the local farm-to-table place which is actually only eight minutes from my house if I take the interstate. They grow some of the food they serve and they keep chickens and quail and it's always fun to walk around after you eat there to see the critters and the types of gardening they're doing.
I rarely get to eat lunch with Vergil so that was extra special and the boys were happy to have their daddy with them. 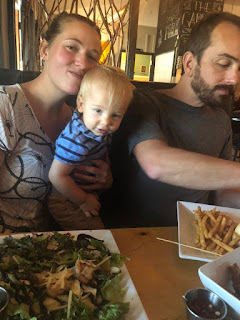 I didn't get a picture of August but he was a very happy boy eating curly fries and chicken fingers. I was a bit disappointed in the food. They use very good ingredients, fresh and locally sourced, as the cool kids say these days and the flavors are good but things were a bit, um, greasy?
We ordered some eggplant fries and they do grow the eggplant there but they were so heavily battered and fried that that eggplant could have come from Taiwan and I wouldn't have known the difference. Not that I have a problem with battered and fried foods. But let's show some respect, people!
But we were all happy with what we'd ordered from Jessie's salad to Vergil's catfish po'boy to my barbecued pulled pork on cornmeal johnny cakes with wilted arugula although no one could possibly have been as thrilled as August was with those curly fries. Levon liked everything.
After we ate and did the garden-and-critter tour I went on to Publix where I actually bought... 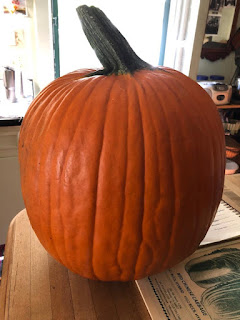 ...this fine, fine pumpkin.
And a small bag of miniature Reese's peanut butter cups.
Look- if I'm going to end up sinning, I'm going to enjoy the hell out of it, okay?

And after I got home and put away my groceries I laid down newspapers on the back porch table and I carved that pumpkin and I was glad I'd bought it. There's just something about the smell of a pumpkin when you cut it and the visceral feel of the pumpkin guts and slippery seeds that is so very pleasing. When we were having lunch, we talked about carving pumpkins. I always, ALWAYS carve my pumpkins into the most traditional, plain jack-o-lanterns. Always have, always will. We discussed the different ways people carve their pumpkins now with all sorts of incredibly artistic and fancy designs and I agreed that that was cool unless they use one of those stencil kits which is nothing more than CHEATING!
Sorry. This is the truth. 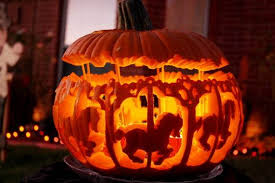 Now just look at that. Is it cool? Yes. Yes it is. But does it have anything to do with Halloween? NO IT DOES NOT! It's vegetable art but it is not Halloweeny. It is NOT a jack-o-lantern.
And yes, Halloweeny is a word. It is an adjective. Although I suppose it could be a verb.
"Let's Halloweeny this place up!"

Okay. That's enough of that. I couldn't diagram a sentence now if you held a gun to my head and I used to be SO good at that.

I used to be so good at a lot of things I can barely fathom doing now. We needn't go into details.

Tomorrow's plan? Going to story time at the library with Lily and Jessie. The kids will be wearing costumes! Be still my heart. 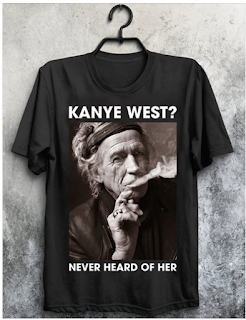 I haven't discussed dear Keith lately but let me just say that sometimes a little bit of Mr. Richards is exactly what I need to keep from falling into the deepest depths of despair.

Whatever gets us through the night.