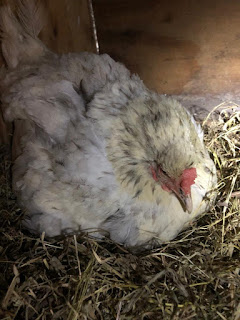 Well, nothing yet. I've been checking all day and I don't think I've ever been this eager to get chicks from a hen sitting on a nest. I don't even know why but I think it's partly because Darla has just been so incredibly devoted and faithful, never once moving off that nest that I know of. I want that incredible focus and dedication to be rewarded and yes, I am anthropomorphizing like crazy here. I really doubt that she has any idea why she's sitting on those eggs. And I don't think that she's looking forward to being a mother, either. She's just sitting on eggs because that is what her nature and her instinct have told her to do and it's strong within her. I have a feeling that if babies did hatch, she'd be as devoted a mama as she is a brooder but I don't know that for sure.
But I surely do hate the thought of having to take those eggs away from her which I will have to do in a few days if there are no babies. I think she'd literally sit there until she died if I didn't and of course, rotten eggs are rotten eggs.
Well. I'll give her a few more days.

Besides checking on Darla, I've done squat today. I've been lazy, lazy, lazy.
And I don't care. My phone told me that I walked over four miles yesterday and that was without leaving the yard except to go to the post office and dump and I drove to those two places. Probably something wrong with that app but I know I was pretty busy yesterday.

Lily and Hank still don't have power. Poor Lily and Jason with those kids. No water, either, since they're on a well. Jason tried to hook up the generator to the pump but no one in Tallahassee had the part he needed to do that. Wonder why.
Not really.

We're experiencing a weird electrical situation which started last night when the power in random areas of the house went out. Mr. Moon and Vergil did all of the breaker flipping and everything you do and nothing seemed to be wrong but still- no power in parts of the house. And then, after awhile, the power came back on and then, after awhile it went back out.
Okay.
The men couldn't figure it out and eventually it came back on and stayed on all night but went back out this afternoon and then...came back on. I remembered that when you call the power company to report an outage, they ask if it's full or partial so we called them and they said that they'd send someone by to check it out. And that it's probably not dangerous.
Okay.
Whatever.
I have no idea WHEN they'll be sending anyone out since all of the linemen are probably working eighteen hour days to restore power to people who don't have it.
Tiny problem. I have a feeling that when a huge branch in our front yard fell and hit a line but did not pull it down, it probably jerked something in the process which is now wonky. Of course, what I know about electricity is that I got a D in physics so there you go.
WAIT! HOLD THE PHONE! DUKE POWER GUY IS HERE!
I can't believe this. I wish I could send him over to Lily's and Hank's houses. He's crimping and wrapping and doing all that fancy stuff. I do love a man in a bucket truck.
And he just finished up.
Wow.
Rather unbelievable.
And it was the connection which was wonky.

I used to have a friend who talked about the changers of the oil and the tillers of the soil and I've never forgotten that. We sometimes tend to think of the people who maybe wear shirts with their names embroidered on them as less than. But these are the people who ensure that we can flush our toilets with the desired results and who know what to do when the Check Engine Light comes on and who fix our furnaces, our air conditioners, who yes, grow our food and maybe cook it and serve it, too. Who build and repair the roads and keep the railroad tracks cleared and safe, who hook up the internet that we can use to go online and bitch about repairmen. Who deal with our trash and with our dirt and with our mess and who create order where there was none before.
And the ones who have the bucket trucks and the hardhats and the tools and know how to use them.
They, like teachers and nurses are the ones we should most respect and pay accordingly but of course, we do not.
No. We're obsessed with people like Kanye West and his Kardashian wife who have probably done less than one good hen for the benefit of humanity.

Well, that's as political as I am going to get tonight.

I just got a text from Rachel- she and Hank have power.
Hurray for them!
And oh, poor Lily.
She just texted, "This is a game of last man standing that I wasn't trying to win."

Mr. Moon and the power guy are now in the Glen Den talking about I-do-not-know-what.
Hunting? Fishing? Electricity? Old houses?
Whatever it is, they sound like kindred spirits.
Okay. He just left. They were talking about deer hunting.
Mystery solved. No surprise.

This is reality in real life. Or at least one form of it.
You know. I'm sure you know.