When Maggie was here yesterday she noticed a net bag full of colored plastic balls in the pump house. The kind of balls they have in ball pits. A friend of ours picked them up at a Goodwill a few years ago and I don't think I've ever brought them out for the kids but as soon as my granddaughter got here this morning she was determined that she was going to play with those balls.
And let me say that when Magnolia June is determined, it is best for all concerned to let her follow the path of that particular determination.
I put her off for a little bit with some smoothie and cheese toast and she played with one of her dolls and rode the horse for awhile but then nothing would do but to get those balls.
Sigh.
I knew they were going to be dirty and I didn't quite know where to dump them to create a small ball pit so I ended up bringing them in the house where we put them in the bath tub. This was fun for a little while but as with so many cheap, colorful things, the pleasure fades quickly. 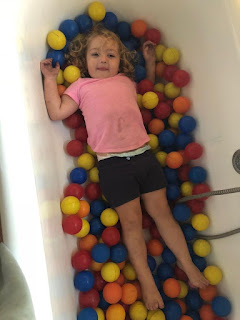 She did just about everything you can do with plastic balls in a dry bath tub including sorting them by color and by then she was as filthy as the balls were so I suggested that we put the balls back in their bag and that she could have a bath. She agreed that this was a good plan and she helped me to put all of the balls away, as determined and industrious as any two-year old I've ever seen, and then I ran her a bath and after that she had a short shower to wash off all of the bubbles. After all of that she was as clean as a bean and her hair was curly as it could be and then she wanted to play outside which we did. Of course the tractor was involved. 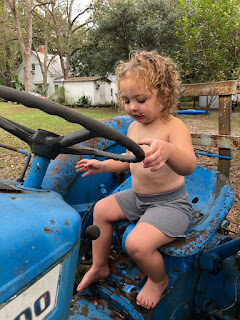 So were the riding lawn mower and the four-wheeler and the old van. By the time she'd done all of that, she looked like this. 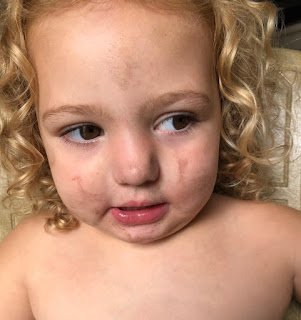 She's so funny. She wanted me to open the door to her Boppy's old truck so she could see inside it so I did. She looked around it and said, "WHAT??!! Oh my gosh!"
I have no idea what she was remarking on but it made me laugh.

We did a lot of swinging on the porch swing and she had to frequently leave to go tend to a baby. "Be right back! Baby crying!" she'd say, and then she would go and come back.

After she left, I walked into my old bedroom to find one of those babies safely tucked under the covers. 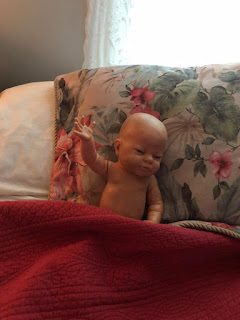 After awhile Lily came to pick her up with Gibson and he got to hold one of his grandbabies. 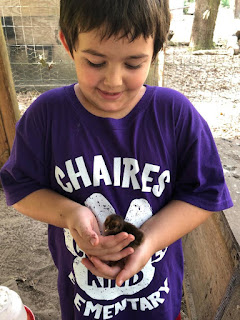 As you can see, he is a very tender and careful grandfather.

And all of that is mostly what I did today. I've checked on the chicks and Dearie many times and given them chopped apples and fresh water and more feed. They all seem as healthy as can be.

And so it is Friday. They don't seem to be meeting at the church tonight. I have the air conditioning on for what I hope is the last time in 2018. I am going to cook a snapper. I think the lady who lives one house over across the street from me may have died. An ambulance left her place today which was not heading to the hospital and it did not have lights or siren. I know she's been very ill. I've never gotten to know this woman well. She stayed in her house most of the time although of course we would talk if we were both in our front yards at the same time.

The presence of my beloveds who have passed seem to be close lately. I wonder if it's due to the proximity of Day of the Dead. I do not know but I think of them often and as tenderly as Gibson holds that chick. They come to me in dreams and they know and I know that they are dead but still, there they are. "Let's discuss that," I told Kathleen in a dream lately. But before we could, the dream was over. If she had wisdom to impart, I did not receive it and so I will be satisfied with what she and all of them gave me when they were here with voices to speak that I could understand.
It is good to remember those things.