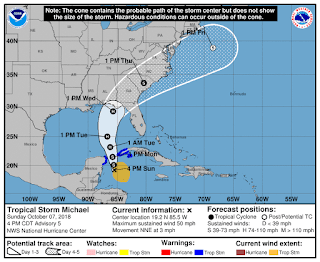 Woke up this morning to discover that within three days time we will most likely have a hurricane visiting us. That's from the National Hurricane Center.
Here's another map, this one posted by my favorite weather forecaster, Rob Nucatola, a local guy. 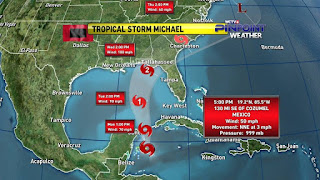 That's prettier, isn't it?
So bottom line for now at least is that Tropical Storm Michael is causing a bit of wind and rain in Cozumel and on Wednesday it will be Hurricane Michael and will be causing a lot of wind and rain here in what we lovingly call the Big Bend area of Florida. I like Nucatola because he's not a fear-monger, not a shouter, just a calm and rational reporter of what's happening and the possibilities of what might happen from an educated and experienced viewpoint.
Here's what he's saying at the moment:

"Think about your plans for the week - especially Wednesday. And make contingencies."

Oh god. Really? I hate making contingencies. I'm not sure that his use of that word is what we might call proper but I get the picture. He's a meteorologist, not an English teacher.
But I suppose we should make sure that the flashlights are at the ready and that we have the proper batteries and blah, blah, blah.

Anyway, I'll keep you updated on that because I know you'll be worried as hell because we've died in every other hurricane that we've ever had.
But in all honesty- HEY! This could be the one!

And at least it's supposed to get a lot cooler so if we can't use our AC due to power outages it won't be heat stroke that we die from. 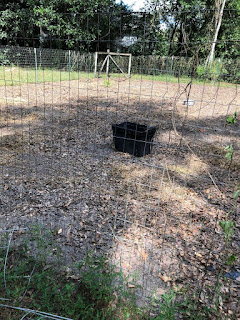 Hey look! It's a patch of barren desert! No, not really. It's my totally weeded garden. I did leave a few pepper plants and my crazy good wild arugula and one small bit of weeds that were rooted in an ant hill because I'd had enough ant bites for one day.
Now all I have to do is wait for Mr. Moon to till it, then plant it, and then rake up a million leaves and mulch it!
It needs what they call "amendments" and a giant truck load of mushroom compost would be lovely but if you think I want to shovel mushroom compost out of a truck and onto the garden and then shovel it all around you are wrong. I joke that the two things which made my husband fall in love with me were my biscuits and seeing me shovel horse shit and actually, that's sort of not a joke but despite what I told August, I feel a bit too old to shovel horse shit or mushroom compost or even a lot of anything but I suppose I could if I put my mind to it.
Luckily, making biscuits is not physically taxing so I've still got that going for me.

Mr. Moon got home this afternoon and I'm glad to have him home, safe and sound. He's just made me a martini which is lovely and now he's relaxing in his chair although I'm sure he's missing his little TV watching companion. Strangely enough, those little boys seem to have survived without me. I am not sure how that's possible, but it is.

No sign of Dearie again but I think she's probably fine. Darla's been on the nest for two weeks now and that means one more week for her before she "has birth" as Owen once said about Violet being on the nest and hatching eggs. The other chickens are not quite sure what to think about the garden being weedless. I'm a little worried that when I do get around to planting the winter garden and it starts coming up that they're going to simply fly over the fence and munch away. They love collards and lettuce although they seem to leave arugula and kale alone. I can dig where they're coming from with the kale (haha!-vintage hip lingo) and I guess the arugula is too peppery for them. Who knows?
Not me.
But we're going to have to have a come-to-Jesus if they try to eat all my lettuces.
I have no idea what that means.

As amusing as all of this has been, I have felt very dark today. It is the birthday of Ziggy, my friend who died recently. I messaged his wife and told her I was thinking about her and watched a little of a live event where people had gathered to play music and tell stories about him. I still can't believe he's gone. He was such a large, large soul as I wrote his wife. I still tear up every time I think of him dying. How can that even be?

And even though I thought I'd come to terms with the Kavanaugh thing, I've realized today that the triggering which occurred not only during Dr. Ford's testimony but even more so when he got voted onto the bench has once again brought up the shit from the bottom of the pot to roil and boil around in my blood and my soul.

But I must report that I got a Facebook message today which I responded a bit rudely to, thinking it came from a friend of over fifty years and ended up telling him I loved him only to realize that no, it was not my friend of over fifty years but someone who has just recently become a FB friend whom I really do not know at all! But he responded with such graceful humor that I could only apologize and laugh at myself and wasn't even very embarrassed.

First world 21st century problem which in this case, was hardly a problem at all.

Okay. So stay tuned for the tropical updates.

I'm your gal in the field, your chicken-news relater, your gardening guru (as if) and your Brenda Starr reporter. 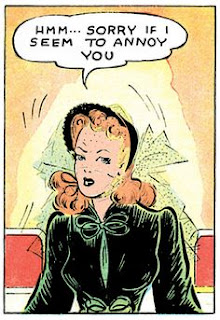