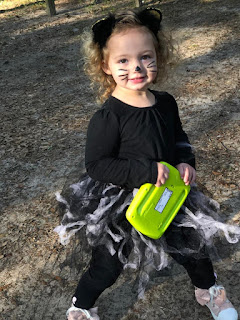 When I got to Lily's house this morning, Ms. Magnolia was in the process of getting her kitty cat attire on. Lily made that skirt and it even has a tail. That woman is so crafty.
We drove to the library where we met up with Jessie and her boys and August and Maggie posed for me. 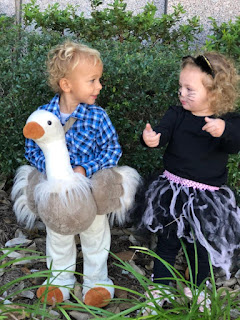 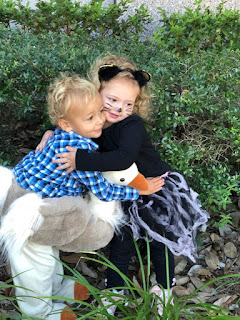 August's costume is a stuffed ostrich which is held on with straps and is almost impossibly cute. The tail waggles as he walks. There are feet which go with it, as you can see.
Baby story time was a hoot with lots and lots of babies and toddlers. The previous story time guy they had got a different gig somewhere and the one that was doing the honors today was...well...he was young and serious. But the kids and the mommies and grandmommies and the one father all had a good time and I love they way the participate or don't, dance or don't, sing or don't, clap their hands or don't, stay in their accompanying adult's lap or don't. They are each and every one their very own person with their very own personalities already very much present and of course there was that one kid, Kevin in this case, who kept escaping and running off and trying to move chairs and his poor mother did her best to keep him interested in the songs and stories but Kevin wasn't really having it.
After it was all over, the last song sung, the stickers given out, Maggie and August went to the little "tree house" which is a platform up a short flight of stairs and they began stacking the seat cushions and having a very good time doing that. At one point Maggie decided to carry the cushions down the steps, one at a time, and August immediately got into that game and then they stacked the cushions on the floor. Kevin joined them and decided that the best way to get the cushions down from the platform was to throw them over the railing which was good thinking, in a way, but not very safe.
"KEVIN!" his mama called.
That woman does not have an easy life. Trust me.
Then we moved on to the actual building blocks after all of the cushions were taken back up to their proper place and more towers were made. 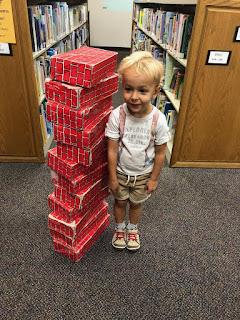 This one was taller than August and as you can see, he was quite proud of it. Then they worked together to put all of the building blocks back into their proper cubbies and I said, "Teamwork makes the dream work!" which is what the dance teacher/drag queen, Alyssa Edwards always tells his students on "Dancing Queen" which is a series you can find on Netflix and which is somehow quite enjoyable.

And then we were off to lunch, of course, and we went to the place that has everything from the best hot and sour soup to curried tofu to empanadas to beautiful egg rolls to daikon salad to noodles which are three feet long. At least. August was most impressed with these. Maggie actually asked for more broccoli and green beans. And then they both had delicious ice cream.
Hard to beat that place.

I took Lily home and was going to jump start her car which Maggie had left the key on (Maggie's favorite thing is pretending to drive) and we soon discovered that a Prius will not jump start a car which has had its battery completely drained. So. I went and got Owen and Gibson from the bus stop and thrilled them to their toes by taking them to the Bad Girls Get Saved By Jesus thrift store and buying them each a toy. The sign on the door had said that all toys were 50% off but the girl behind the counter did not seem to be aware of this fact. However, she was such a scowly-faced girl (I don't think that she has been fully saved yet, the joy of Jesus has not fully descended upon her) that I was afraid to point out the discount and paid the full price which made my purchase $5.03 which I gladly paid. 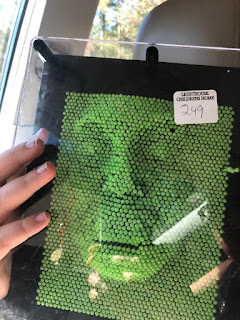 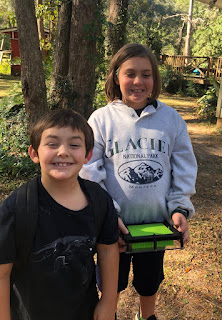 And that was my day. I got to see and do stuff with all of my grands and now Mr. Moon is home and I am making soup.
And it's time to light the candle in the pumpkin.