Another day where I've felt useless and also, looks like a dog got in and snatched Little Richard. There's a trail of feathers right out the gate and possums don't usually use the gate.

So. There's one rooster the hens don't have to worry about, I guess.

The dishwasher decided to stop functioning properly. It was a problem that Mr. Moon had fixed before so he (hopefully) did it again. It's running a cycle right now. He did indeed fix the food processor. He and Owen spent most of the day working on a deer blind over at Owen's house. They had to run to town to get parts and there's a rumor they also got milkshakes.
Maybe some french fries.

And me? Well, I still can't figure out that damn dress. I'm about to stash the whole project. Stash or trash?
Mmmm...

I made a German chocolate cake. 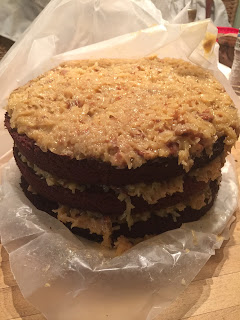 Looks great, doesn't it?
Too bad it's a little burned at the bottom of all the layers.

Jessie and Vergil and August are safely home and it's been such a long day they decided to just get on to their own place and settle in a little. I'll take them food tomorrow. Here's a picture Jessie sent of their lunch. 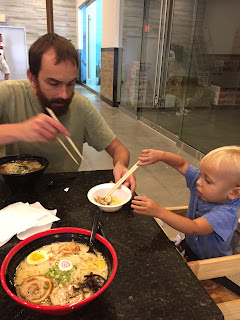 They stopped at a huge, brand new Korean market which Jessie said was about as big as a Walmart. They ate in the food court. Look at that boy using chop sticks! Look at that soup! Puts my ramen soup to super-shame.
I swear, I just saw the pun there.

So another Sunday and at least I'll get to see Jessie and Vergil and August tomorrow. I'll take them chicken stew and dumplings and German chocolate cake and apologize like crazy for the burned parts. 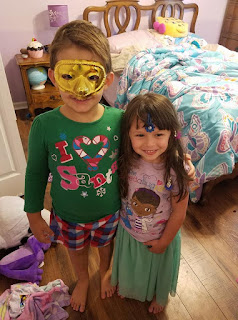 Gibson and the darling Lenore. Gibson asked Lauren, Lenore's mama, to take the picture and then proclaimed that they were so cool. And Darling Lenore said she looked like a queen or something.
They are right.

Have you seen what's happening in Houston and in that area? Fifty inches of rain? Trillions of gallons? The irony of all of this happening as I listen to "Flight Behavior" has not escaped me.

I'd say "God save us all," but of course you know what I believe and what I believe is that if there was a god, he'd be crying at what we have done to his creation.

Sorry for the bummerness. Sunday, etc.