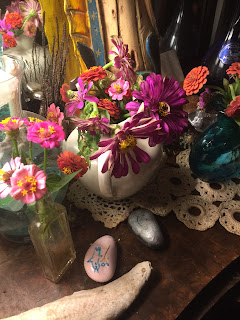 The last of the zinnias which never did very well at all this year. I never got my beautiful colors, I never really got any large ones. I planted three separate packets, all different varieties so it wasn't that. I think I waited too long to get them in the ground. I will try to remember that next year.
I won't.

Oh, what a morning.
I had an issue with the Publix pharmacy in that I thought I'd picked up a prescription last week but when I ran out of the pills I had yesterday, I checked only to find that I did not have it but had two bottles of the same prescription, issued on the same day.
Little bit of a cluster fuck.
So on the way to Jessie's I stopped at Publix and went over the story with the pharmacy guy and he insisted I'd picked those pills up and signed for them and so forth. I must have them at home somewhere. So. I drove all the way home. I ransacked the place. No. I did not have the pills. I called back to Publix where I spoke to a different woman. She finally said, "Oh! I see what happened! Your prescription is still in the bin!"
Back to Publix.
It wouldn't have been a big deal except that quitting taking that particular drug abruptly can lead to many things including heart attack. And I was feeling really weird. And why am I taking these drugs anyway?
Oh god, I don't know.
But. I got my 'script, I took my pill, I went over to Jessie's where August ran to meet me and the first thing he said was..."Boppy go?"
Of course.

He heard I had a cake and demanded to see it.
"Happy cake!" he said. All cakes are for happy birthday. He and Jessie split a piece after I sang him the happy birthday song. 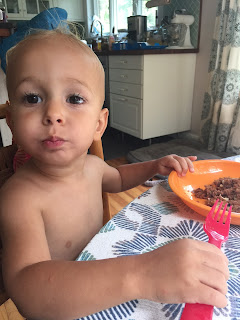 He is so happy to be back with his dog and his toys and his books and his bed. He showed it to me and said, "Nap!"
"Yes," I said. "This is where you nap.

And then he got dressed and we met Boppy and Vergil for lunch and he was so happy to see his grandfather. And his grandfather was over-the-moon to see him. I think they have a special bond. After lunch I went back over to Jessie's house for just a little while before I had to go pick up Owen and Gibson at the bus stop. Their mama and Maggie were at a friend's house who just had surgery and Lily is helping her out some. In the few minutes we had, Jessie and I talked about what she needs for the new baby, which is not much, and a few things she'd like to change a little in labor.
It was...precious. She's so pragmatic, this child. This she gets from her father. And in the midst of the pragmatism, she can be emotional, too. This she gets from me. She did not get emotional today but I did, a little bit. When she was talking about labor she said, "Now you remind me of this when it's time," and I felt as if I'd been given a golden chalice filled with the sweetest wine ever made on earth. I have been given a task, a responsibility. I am so honored.

I had to run to go pick up my big boys and they got off the bus and ran to me and I was almost afraid of being knocked over. They are getting so big. "Are we going to your house?" they asked and I told them we were and they were happy.
And when Lily got here, Maggie wiggled and giggled in her seat and said, "MerMer!" over and over and had an entire conversation with her mother about me as Lily unbuckled her and then she handed her over, sticky as she could be from a lollypop that someone had given her at the store.
Oh, she kissed me and loved on me.
I can't wait to see her and August together again.

So my day was mostly babies including my OWN baby, and Hank and Rachel came into the restaurant just as we were leaving so we got to see them too. 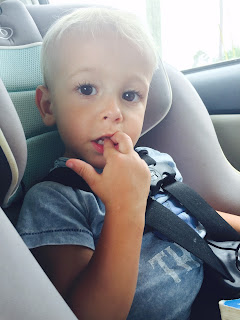 He's home. This one is back in his Florida Swamp Home, just returned from his North Carolina Mountain Breezes Home and he's talking so much more than he was just two months ago and he knows what he wants and he likes avocado and chocolate happy cake and his grandfather and his dog and his mama and his daddy and his books and his bed.

The ache in my arms has been relieved somewhat and I even got to palm-cradle the little brother in Jessie's belly some and no matter how I feel in the mornings when I wake up, sad and fuzzy and hopeless from my dreams, there is some part of me which knows that there is indeed reason for me to live and that reason gleams from the eyes of these children, each of them so different and requiring different things from me but mostly the same thing, which is absolute unconditional love and attention.
That is something I can give, still.
And so I do.