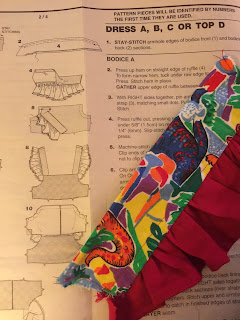 If yesterday was filled with busy-ness, today has been filled with sitting in a chair and studying the directions for the sewing together of this dress, specifically the straps, strap ruffles and bodice and bodice lining. I have studied, pinned, basted, ripped out, studied, pinned, basted, ripped out over and over again.
This makes me feel so stupid. I mean- I can read. There are pictures.

I finally put it down and went and took a little nap, waking up when I thought I heard Mr. Moon coming in from Georgia but it was merely one of the cats, probably Jack, jumping from something to the ground. He is so big and so heavy that he sounds like a human. Or perhaps a rhinoceros. I got up anyway and drank some coffee and studied and pinned and basted and ripped out some more.
And now I've put it down for the day for sure and Mr. Moon is home and has made us martinis, both with a pickled okra in them and I have to say that these are the most delicious pickled okra I may ever have eaten and I wish I had about a bucketful of okra to pickle. They are crisp and they are spicy and they have just the slightest sweetness to them.
I mostly used the recipe which you can find HERE although I didn't have apple cider vinegar and so used white vinegar and didn't have mustard seeds so I didn't use mustard seeds and also I added dry dill weed and used more dried red pepper flakes and garlic than the recipe called for but besides that, I TOTALLY FOLLOWED THE RECIPE!
Haha.
I am southern and as such, I need more heat and more garlic and that is that and cooking is one part science, one part recipe, and all the rest parts intuition and what-you-have-at-hand.

I think I am missing three chickens. I have not seen Dearie all day long and a few of the hens are missing too. There ain't much I can do about that and maybe they'll turn up tomorrow. Dottie and her little's were out again all day, scratching and pecking and they, at least, are safe and sound and Dottie has brought them to bed. I got six lovely eggs and I have noticed that Owl and Lucy are being courted and mated so they should start laying soon. I think their eggs will be colored some shade other than brown or white and I am excited to see what they will look like.

Tomorrow Owen will be starting the second grade and Gibson will be starting kindergarten. Maggie will be missing her brothers so much but think of how happy they will all be when school is over and they are all back together again. Here's a picture I stole from FB of Gibson and Maggie from their family festivity today. Their last-day-before-school-starts fun. 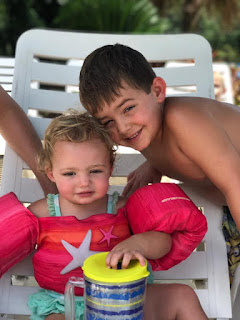 And that's probably my mantra.