And Humanity Survived Another Solar Eclipse 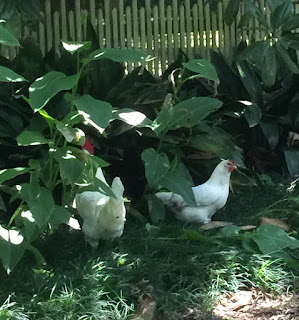 So, the chickens did notice something was going on today. First the roosters decided it was time to have twilight sex. They chased hens all over the place. Then they all got quiet and hid in the plants and talked very quietly among themselves. I swear, it was a real conversation. And then, a little bit after the fullness of it happened, some of them went to roost.
After awhile they all came back out again and resumed their day and I could just imagine them saying, "So. Boy. That was weird."
It was weird. It actually made me anxious as if my ancient ancestors came forth inside me wondering what in hell was going on in the heavens and was this the end of the world and was a giant snake eating the sun? I honestly could not enjoy the whole deal because of that. It all just felt wrong, despite my modern human knowledge about what causes an eclipse and all of that stuff.
Just wrong.
I made my little viewing device from a Honey Nut Cheerios box, two index cards and some aluminum foil and was rather shocked to see that it worked. But I'd already been outside and cleaned the hen house and picked the garden and just being out in the heat again made me feel slightly nauseous so add that to the voices of the ancient ancestors and I just wanted it to be over.
Here's what I picked. I finally faced the field peas. 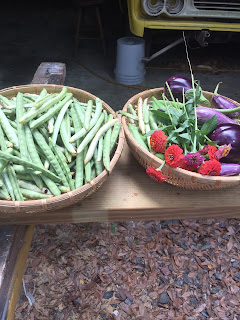 As well as some okra, some eggplant, and some zinnias.
When Mr. Moon got home he said, "Did you dig any sweet potatoes?"
I just looked at him like, "Are you fucking kidding me? Fuck no."

He's shelling peas right now. He's actually faster at the chore than I am. Maybe I should go study his technique.

Jason came over to help Mr. Moon move a pool table (or part of a pool table) into the old barn. He brought the kids and I asked Maggie if she wanted to put on one of her new dresses. I finished the sun dress today. She looked at them and said politely, "No."
She did, however, want an apple.
Mostly she wanted her Boppa.
When he came back into the house she lit up like Las Vegas at Christmas.
"Boppa..." she sighs and holds her arms out to him and kisses him.
It is real true love.

Here's Owen in the new Rolling Stones t-shirt I ordered him because he's outgrown his old one.
I was going to save it for his birthday but I just couldn't. Boppa wanted in on the picture. I sure do love those boys. 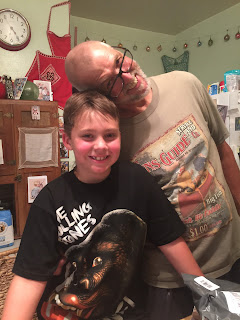 That shirt is an adult small. I tell you what- that child is going to be taller than me before we know it.
Like- by the end of third grade.

So. That's what my eclipse day was like. The boys were thrilled by it and D. Trump looked at the sun naked-eyed and his wife looked extremely uncomfortable and because I am a mother, I won't say anything about Barron except that I feel so sorry for that child. Compare how Obama interacted with his children to the way DT interacts with his youngest son, which is to say- he doesn't. It's so disturbing.
But there are hundreds of thousands of pictures today, I am sure, of people standing in groups and staring up at the sun with their solar eclipse glasses on, looking for all the world as if the alien invasion were taking place.

And oh! Weren't the crescent shadows after the event the best part of it? I didn't even know about this phenomena until Lily told me. And it blew my mind. I haven't even looked up the scientific explanation because I just want it to be magic. 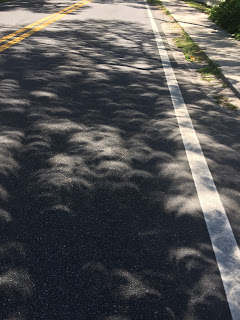 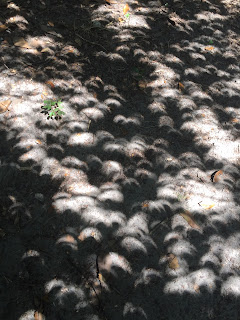 And according to my ancient ancestors, it is.