Hey! Grab That Branch And Keep Hanging On! 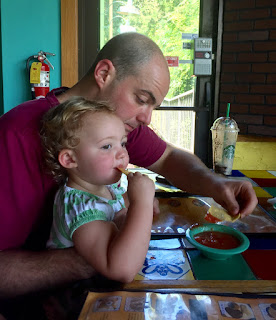 As you can see, Magnolia June is a little bit sick with a cold but that just gives her rosier cheeks. There she is with her handsome daddy who adores her.
And I adore him.

Yes, yes, we went out for lunch again. Hank and Rachel met us this time and Jason got to come too. Our waiter's face is becoming as familiar to me as a family member's.
"Are you just so thrilled to see us again?" I asked him as we were sitting down.
"Oh yes," he said.
Well, we do tip nicely, all of us having been servers at one point or another.

After lunch I went to the main library, the BIG library. I rarely go there anymore since they built the branch library on the east side of town but sometimes I do and when I do, I am amazed once again by how wonderful libraries are with their books and their internet and their magazines and audio books and DVD's and music CD's and newspapers and atlases and just all of it. Libraries are my favorite indoor space and as I have said so many times before, the absolute highest proof of civilization.
A building dedicated to knowledge where no one asks you for a penny.
Our libraries are handing out free vegetable seeds again. We are allowed to get three packets a month and today I got two packets of slow-bolting cilantro and one of arugula. They do this in the spring and in the summer and give out seeds which are seasonal.
Books AND seeds? For free?
Bliss.

I eavesdropped on a conversation between two men sitting at a table by the new fiction. One of them said, "There's something wrong with that woman," and I was so afraid they were talking about Hilary Clinton and that then they were going to go into some horrible racist tirade and I was going to have to search my conscience and heart to decide whether to say anything or not- and what would the ethics be there?- but as I kept listening I realized they were talking about celebrities like the Kardashians and other reality TV personalities and how these women freak out if they break a fingernail and other "bullshit like that," and I sort of wanted to sit down and chat with them about these issues but of course I did not. I did note that for people who are so disdainful of reality TV, they sure did know a lot about it. I mean, at least I ADMIT that the fact that Luann on the Real Housewives of NYC is getting a divorce from her husband of seven months is something I find endlessly entertaining.

And then I just came home. I did not go to Publix or Costco or anywhere else and I have spent the entire afternoon sewing and just loving it. I figured out the ruffle on the shoulder strap by completely eliminating it and I am not putting a zipper in (a zipper in a toddler dress? oh, fuck no) but have sewn little loops on the back and will go through my button box to find buttons to put there and maybe on the pockets as well. I'm down to the ruffle on the bottom but I think I may redo the attachment of the bodice to the skirt because I'm not happy with the way it's done now but we'll see. I am so grateful that I have rediscovered sewing because it's something I can do in the air conditioning which is still somewhat productive, a bit creative, meditative, and actually of some use. I just cannot bring myself to work outside right now, not even to go and pick up downed branches to drag to the burn pile. It's all I can do to walk to the hen house and check for eggs.

Speaking of which, I was looking at Dottie's babies today as they pecked at their scratch and suddenly it hit me that all three of them could be roosters. Why hasn't this occurred to me before? I already have three too many roosters.
Oh Lord.

Well, I think that's probably the down home equivalent of breaking a fingernail or some bullshit like that so I'll end this now.
I'm not going to talk about politics today. It is all too obvious what's going on. I will say that I heard part of an interview with Al Gore and he seems to be such an intelligent, hopeful, wise, and informed human being that it gave me the tiniest reassurance that perhaps this country will survive.

Carry on my wayward friends. I'm going to go heat up some leftovers.