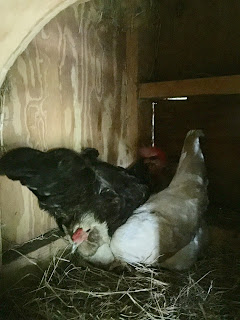 This morning after I let the chickens out and gave them scratch and filled up all the waterers, I went into the hen house to see if anyone had laid me an early morning egg, only to see what you see in that picture. And what the HELL WAS I SEEING?
I turned on my phone flashlight to realize that it was Trixie, arisen and returned from wherever she has been, straddling Camellia's head. Just an awkward position they got in or was Trixie pleading with Camellia not to leave her side today?
Oh, who knows, and who knows where that hen has been but she is a wily old thing to have lived so long and I should have known she'd appear again in her own good time.
She is looking rough, though. 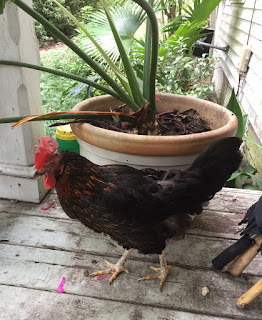 But she is alive and I gave her some cat food, which chickens adore, and I am so glad to see her.

The baby chicks are growing beautifully but are as hard to get a decent picture of as George Clooney's twins. 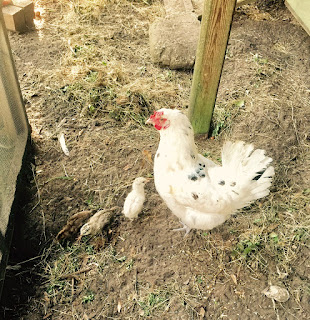 Dottie fusses them away quickly as soon as I point my phone at them and forget me trying to get down on their level to get a better shot. By the time I'm down there, they've disappeared under the coop box per Mama's instructions. Don't tell me that chickens can't talk.

All right. That's enough of that for now.
It is raining and I'm glad I got a walk in before it started because it's supposed to rain all day long. I have a doctor's appointment tomorrow, just a regularly scheduled check-up with my adorable GP and I am sure we will be discussing my blood work. I have been dreading this appointment for months and months and knowing that it will all be over by this time tomorrow almost brings me relief as much as I am anxious about going. I swear- I think my stomach issue on my birthday may have been not a bug or something I ate but simply a reaction to the anxiety about the appointment coming up.

Let me add one thing. It is so lovely to hear all of your words about my "bravery" and "honesty" and so forth but I am none of those things. There are vast and untold numbers of women and men (and C. was probably one of those too) who were abused as children who have grown up and made amazing lives and raised beautiful, sane families. This is just one woman's story. My story.
And I am not ashamed. But I am not remarkable in any way and indeed, have been as lucky as could be in so many aspects.
And I know it.