Facts Of The Matter 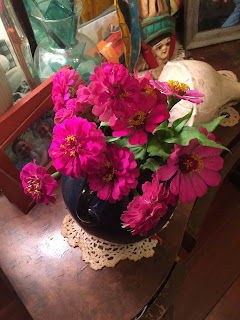 It's been a day which has held a dream-like quality and I spoke to hardly anyone. I did hardly anything. I don't feel well. To say that every step hurts is an understatement. My energy is about at zero. Every damn thing I did today seemed to take a thousand times more effort than it should have.
I picked green beans and snipped zinnias and collected eggs and swept the front porches and did some laundry and finally unpacked and that took everything I had.
I took a nap and just lying on the bed was heaven. Would it be possible to spend a day in bed for no reason? I don't think I've ever done that in my life. I'm not sure I could unless I was sick.

Am I dying or depressed?

I don't have the slightest idea.

Mr. Moon just got home and he's gone out to the garage and I hear the chain saw. He's going to cut down the branch that fell on the garden. And now it's started to rain again. It rained this afternoon in a brief but impressive downpour, the temperature again dropping so quickly that I actually became chilled sitting on the porch and then it grew hot again and I know it's hot everywhere, not just here, and now as I write this, it grows cooler again.

No wonder we southerners are so crazy. We can't count on the weather or the politicians or the educational system or our crazy mothers. We're all halfway insane I think sometimes, some of us all the way there, the crazy road having been traveled successfully to its destination.
Ah well.
What are you gonna do?

Hillary Clinton just got the official nod as the Democratic candidate. I wish things weren't so conflicted so that we could simply boggle at the concept that a woman, a WOMAN, has gotten to that position. A grandmother. So that we could celebrate that. So that we could celebrate her. I have no idea what's going on in politics these days behind the scenes. Is Putin puppet-mastering Donald Trump's campaign? Are Bernie's supporters really so pissed that they'd rather throw their vote away, making a Trump presidency a reality than to vote for Hillary?

I don't know. I feel perfectly confused and exhausted and overwhelmed. I want to run away but would that solve anything?
Maybe tomorrow I'll take a walk and then just head to the river by myself. Take a chair and the book I'm reading. I could think about my friend Sue whose 67th birthday it would have been. She's been gone for 22 years and I still miss her bad. Real bad. She was wicked smart and funny as hell and life screwed her over seven ways from Sunday.
And then she died.

The rain is almost gone. The chickens are scratching for their last treats before roosting time. The feeder is filled with juvenile cardinals.

It's been a hard day for me. That's all there is to it. Some days are like that.

Yeah. They are. Despite the good and the beautiful and the fine, all of which I am completely aware of, they just are.