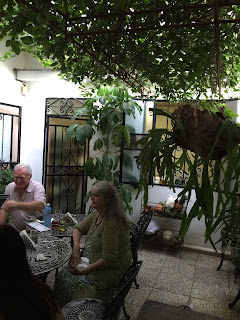 So let's just keep rolling here, okay? After the sound check at FAC on Thursday (which came, you will recall, after getting up in Miami, getting to the airport there, going through security, waiting for our flight, flying, coming in to Havana, going through their security, and driving through Havana to the club, our heads exploding with everything we were seeing), we were taken to our various rooms. First to the hotel where the non-musicians in the group were staying. This was a beautiful old place and although I never stepped a foot inside, I hear that the rooms were luxe and fancy and fine. There was a bar. There was a rooftop restaurant. One room, I hear, had a spiral staircase in it up to another room. The non-musicians paid extra to stay in the hotel and that helped pay the way for the musicians who were being funded by a group called The Friendship Association. We were on a deadline that night for sure and we all had to check in, eat some supper and get back to the club by nine for a ten o'clock performance start. After we dropped off the folks at the hotel, Sobe took the rest of us to the Plaza de Christo. I think that was the name. I just called it the Jesus Plaza. Then we got our bags and the instruments  (and let me say right here that if I ever travel with a musician again, she's going to play nothing bigger than a ukulele and a harmonica would be preferred) and walked a block or so down the street to our little enclave.
Lis and I were given our assignment- a room in Casa Miranda. We met Miranda at the iron-gated door downstairs and she led us up a dark terrazzo stairway to a another doorway which had a yellow painted iron grill and the door. We walked into the place and I had no idea what the situation was so I put my backpack on the little sofa in the tiny apartment, thinking for some reason that the whole space was to be ours.
But no.
Miranda, who spoke no English, opened the door to another room and this was where Lis and I were to stay.
The room was entirely painted white and there was indeed an air conditioner, although it was not on, and fans mounted on the walls beside the two beds. One a single bed, one a double. The sheets on the bed were white, there were no coverlets of any sort. The only thing not white in the room was the zebra-patterned curtain over the window facing the street. 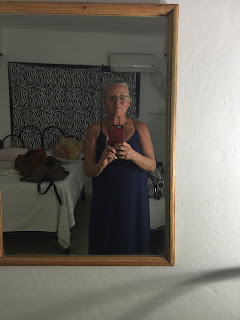 Then Miranda showed us the bathroom.
Okay. Segue.
Bathrooms in Cuba are incredibly basic and having been to Cozumel many times, I have seen some basic bathrooms. Toilet seats are not necessarily required. Toilet paper is to be put into the basket beside the toilet after use because the sewer system can't handle more than what comes out of the human body. But at least in Cozumel, there was almost always toilet paper. In Cuba- not so much. When I used the bano at the FAC, I was a bit shocked. I had never seen a bathroom quite so depressing in my life and that would include some outhouses and latrines I've used.
Pictures: 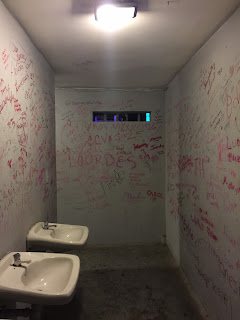 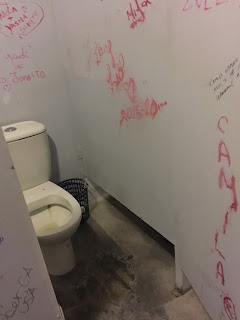 When Lis walked in the first time, she thought the place was under construction and walked back out, mystified. Good Lord but what a depressing place! Gray cement, decorated (?) with pink lipsticked graffiti. Not a shred of a paper product or a skinny sliver of a bar of soap in the entire bunker. Thankfully, we'd been given a huge stack of paper napkins at one of the places in Miami where we'd gone and those napkins were our lifesavers.
And another segue: what IS the Fabrica de Arte Cubano?
Once again- confusing.
It is a government sponsored space for artists. There are floors and rooms and stages for music, acting, dance, visual art, films and it's a club where people can come to enjoy the art, dance, drink, flirt, listen, watch, fall in love, see and be seen. A former peanut refining factory. Here's what it looks like at night. 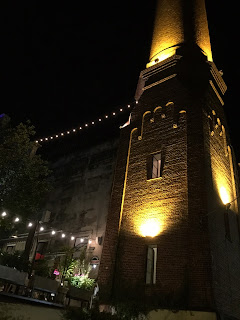 It's a conundrum, like every damn other thing I encountered in Cuba. It's the hottest ticket in town. It's where Mick Jagger went dancing when his little band called The Rolling Stones played in Havana.
There are computer generated images advertising the acts when you come in the door. 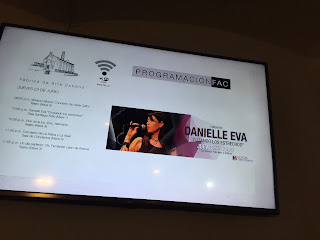 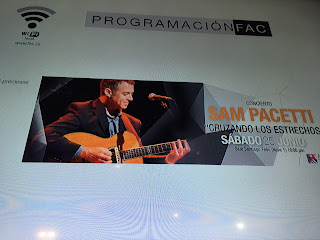 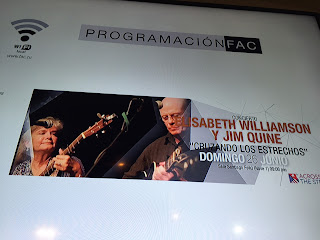 (Some of our people.)

And yet- those are the bathrooms.
There was a bathroom in the green room as well and it was marginally better. For one thing, it was painted white. Bring your own toilet paper, however.

So. Back to the bathroom in our little room at Casa Miranda. We had a toilet seat. We had (theoretically) hot and cold running water in the shower. We had a towel each. We had TOILET PAPER! We had a zebra print shower curtain. In short, deep luxury.
However, when Lis and I walked into our little nun room (as we came to call it), tired, hungry, practically heat-stroked, and just plain weary of too-much, too-much, it was a bit of a shock. I think Lis almost cried. I COULD have gotten a room at the hotel. I could have afforded it and she could have stayed there with me. But no- here we were in the musician digs and although I certainly realized that this was probably the nicest room and bathroom on the block, clean as a bean and with air conditioning and a toilet seat, etc., it was hardly what someone with even a basic American perspective would call luxurious.

We didn't have time to worry about it right then, however. We dumped our bags and met up with everyone on the street and walked the block to the restaurant where we were having our quick supper and that picture up top is of Lis sitting at the table there. We had a fabulous meal. We split everything, Lis and I did, and still always had too much to eat. We ordered a Nicoise salad and a Cuban sandwich and took half the sandwich back to the room. WE HAD A REFRIGERATOR IN OUR ROOM!
Lis finished her supper and ran back to the nun room and took the quickest shower in existence and got dressed to perform. I didn't have time to do a damn thing except take off my bra which I was completely done with for that day. No one knew me in Cuba, I am old, and so the fuck what?
Then, back to the Jesus Plaza, onto the bus, and back to the club.

There was air conditioning in the club. Sort of. It was completely and utterly ineffective, especially when filled with all of the bodies that came to fill it. And here are what the seats we sat our asses on for three nights looked like. 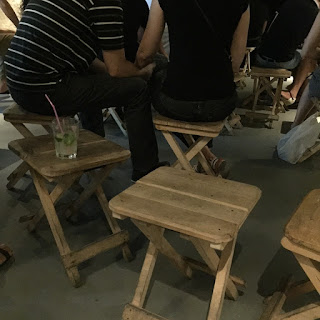 The seats in the film space looked a lot more comfortable. 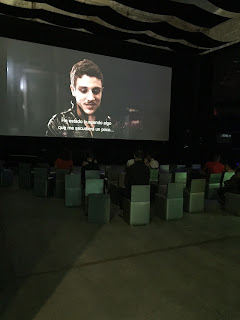 It was so hot up there that I didn't sit down in one. That was on the second floor.

But let me tell you something. After these guys made you a mojito or two or three (which was like watching an art performance in itself), it just didn't matter that much. 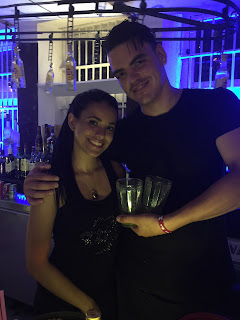 And here's another thing- all of the employees at FAC were gorgeous. As were so many of the Cuban people. And of course I have many words about that and pictures to go with and more questions and more stories but right now I seem to have visitors. 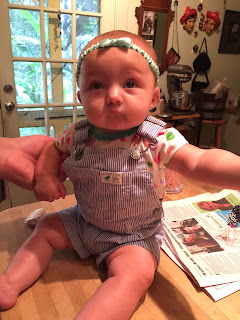 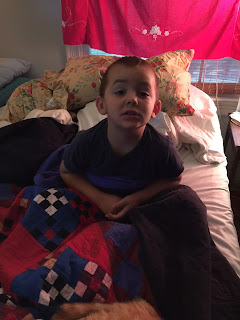 Who are rather gorgeous themselves if you ask me.

More later. We haven't even gotten to the tour of Old Havana, Ernest Hemingway's house, Jim dancing with the coach, me posing for a real Cuban professional photographer at FAC, pictures of food, the art museum, Tim becoming the most adorable person on the planet, making new friends both American and Cuban, and the mysteries of running water and the four keys at Casa Miranda.

Be back soon.
Happy Friday, y'all.