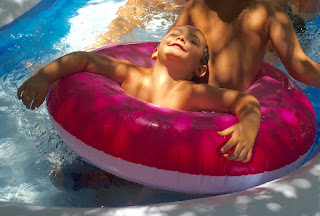 Ah, it was a good day. A pancakes and bacon and play-in-the-pool day. And also, a day where Owen gave Mermer a foot massage, brushed her hair, and did her make-up as a belated birthday gift.
I have to say that he's getting quite good at foot massages. While he was brushing my hair, I said, "My hair's getting really long, isn't it?"
"Yes," he said. "It is but you need to grow some more on top."
Grandchildren are brutal, I tell you.
And then, for the grand finale of my present, Owen gave me a make-over. I'd show you a picture but the only one I took is horrifying. Truly. I mean...no. Some things just cannot be shared.

Here's the boys in the pool with their Boppy. 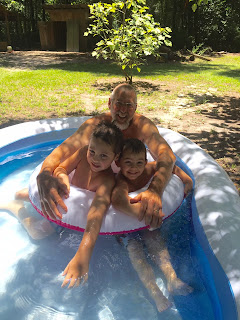 Miss Maggie was delightful, as always. She is such a mama's girl. If she can see her mama or hear her, she wants her. She took a little nap and when she woke up I took her to her mother and she burst into smiles like the sun bursting through the clouds. I did give her a bottle on the bed and cuddled with her, which she allowed sweetly, playing with my fingers and her own toes. She sure did like pancakes. When Owen was kissing and hugging her today and she was smiling at him with her big, goofy smile, he said, "She is a joy, every day!"
Seriously. That's what he said. 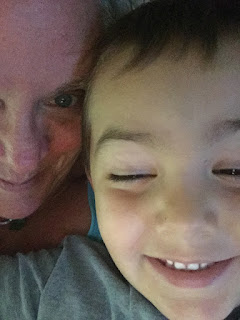 Gibson and Mermer, doing what they do best- cuddling. That child is the cuddlingest child I ever met. He's still got a touch of the baby in him, that one.

And basically, that's what I've done today. Get birthday-pampered and play with babies and visit with Lily. I didn't pick green beans or peas. I should get out there and do it right now but I don't want to. I took a tiny nap and feel a bit Jackie-Dip, as we say around here (and when I say here, I mean, me, in my house).
Oh sure, I did some laundry and filled out my passport renewal application. Did you know that they do NOT stamp your passport when you go to Cuba?

I also read an article online about how maybe Donald Trump may be in the early stages of some sort of dementia which would make sense to me. It seems like his ability to focus and communicate are getting worse and worse and I truly wonder how in the world he thinks he's going to debate Hillary Clinton this fall. The man knows NOTHING and when he gets flustered, he lies and prevaricates and and then lies some more and then talks about how badly everyone treats him because he is, of course, an amazing human being, smart, knows big words, etc., etc.

I mean, the very idea of him going head-to-head with a woman who has literally been in the White House for two terms already (albeit as the First Lady) and who has been a senator from New York and who was the goddam Secretary of State and who is obviously, definitely, undeniably NOT suffering from either dementia or an acute case of narcissism, is simply mind-boggling. It's like putting Sarah Palin up against, oh...Joe Biden, and I'm thinking that Sarah is smarter and was more informed than Donald Trump is. Hey! Maybe she CAN see Russia from her front porch. Let's face it, all possible diagnoses aside, the man doesn't want to do actual work of any sort. He seems to have no grasp whatsoever of foreign policy or domestic policy either, for that matter. I still don't think the man really went into this thing wanting to be the president. He needed brand-name recognition for his failing business dealings and the glow of his reality show persona was wearing thin so...RUN FOR PRESIDENT! SURE! WHY NOT? I mean, running for president has got to be easier than creating products and doing honest real estate deals that are viable and of quality, right?
So what's he going to do? Study? Learn something? Come up with an idea deeper than the one he has concerning his ability to save the world single-handedly? Try to bluster and bluff and insult and lie his way through it? Pretend to have a gall-bladder attack?

He must be losing his mind over this right now.
Oh. Wait. He lost his mind a long time ago. Unfortunately, madness is obviously contagious. Just ask his legion of followers.

All right. I don't feel like discussing this any more and since I am not running for president, I'm allowed to say that.

Sunday night. Leftover enchiladas for supper. And then to bed early to read.
That is my plan.