Another Day In The Life 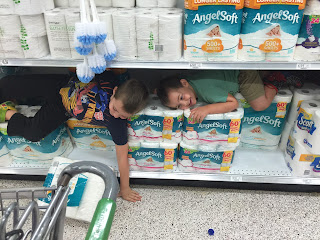 I took this picture in Publix today and then immediately told the boys in stern and no-uncertain terms to "GET OUT OF THERE! WHAT ARE YOU THINKING?"
"But Mer, you said you wanted to take our picture," said a very confused Owen.
"What? I did not!" I said.
Grandmothers are put here to confuse their grandchildren. And make them laugh.
Well, that's my theory.

The children are into telling stories these days. Owen told us a story in the car that Boppy had told him. It involved Boppy buying a pig when he was a boy and then falling in the mud while chasing the pig and then his mother also falling in the mud trying to help him chase the pig.
It's a good story.
Then Gibson told us a story. It went something like this:
"Once when Mer was a baby, Boppy was holding her and giving her milkie from a bottle and a snake came up behind them and bit Mer and killed her. Sorry you died, Mer."

He's four. What can you say? But it's a fine story and includes many deep and ancient elements including love, nurturing, the serpent, and death.

We went to Japanica today. I took pictures. 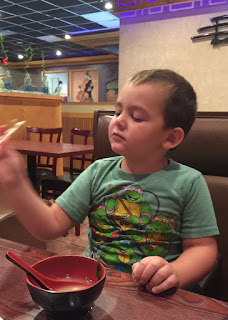 I think Gibson looks so much like his dad in this one. 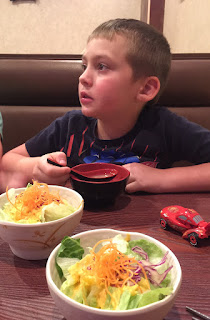 Owen drinking his miso soup. Let it be noted that he drank two bowls of miso soup and all of his sushi and salad. He had told us at one point that MacDonald's was actually his favorite restaurant, but halfway through his soup he said, "I take that back about MacDonald's. Japanica is better."
The boy is wise beyond his years.

Maggie had some rice and a few sips of miso soup. She eats everything and likes everything. A lot. Her doctor's appointment went very well. She is growing as she should, hitting her benchmarks, etc. This doctor is so laid back.
"Got any questions?" he asked Lily after the exam.
"I don't think so," she said.
"Okay. Keep up the good work," and then he's gone.

Here she is in the Publix, rubbing her brother's head. 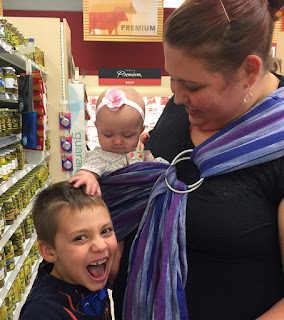 She's so beautiful. When we got home to Lily's house after we were all through with our errands, I was lying on the bed, playing with Maggie and Owen came in and I said, "Owen, do you ever just stare at your baby sister and think, Wow, that's my baby sister!?"
"No," he said. "Kids don't think like grown-ups do. I just like to make her laugh."
And he does.

And so that was my day. Stories and talks and babies and shopping. And eating lunch, of course. While we were at Japanica, Gibson needed to go to the bathroom so I took him. He was in the stall FOREVER, as in, I thought that maybe Christmas had come and gone by the time he was finished and redressed (for some reason, Gibson has to undress before he uses the potty if it's for more than peeing) and had his boots back on. He kept asking me if I was still there.
"Yes," I would tell him. "I'm still here. I'm not going anywhere."
Another lady came in and Gibson said, "Lady! What's your name?"
"Stephanie," she said. "What's yours?"
"Gibson."
"Well, hello Gibson," she said. She was simpatico when it came to small boys. All of this happened behind closed stall doors. Public bathrooms, even ones as nice as the one in Japanica, give me claustrophobia and sometimes it seems like I have spent half my life in one ladies' room or another with one child or another, waiting for nature to take its course.
Sigh.
It's part of being a mother AND a grandmother. And when the child you're waiting on recently curled up on your lap and closed his eyes and pretended to be your baby and then said, "I love everything and I love you," it's pretty much worth it.
A billion times over.

I think that Mr. Moon and I are going to leave tomorrow instead of waiting until Wednesday. That way we can spend the night somewhere on the way, not be so rushed, and get into Asheville at a more reasonable time. I'm looking forward to the trip. It'll be cooler up there and for a few days I can leave my worries about my chickens and yard and garden that need tending behind. Just...let it all go.
Jessie and I talked on the phone yesterday and she asked me what I wanted to do when I'm there. I told her that all I cared about was hanging out with her and August and Vergil when he's not working, and eating good food. Asheville is awash with good food.
I'm also looking forward to being with my man without the cares of home. When we're here, there's always something that needs doing or tending or feeding and it's so easy to slip into a working relationship and that's good in a marriage but sometimes the working part needs to be abandoned and the relationship part needs to be nurtured.
So. That's the plan.
I'll get up tomorrow and clean the hen house and pack and we'll get on the road.

I'll be so sorry to miss the RNC.

I know. You needed to know that.