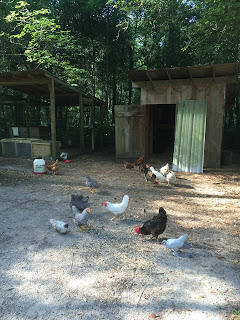 I have so many chickens now. Seventeen, I think. I let them out this morning and they were glad to be free but stopped to peck at the corn I throw them.

I'm having a rough day. The AC fan is busted, gone, done, dead. The weather forecast has this cheerful little note:

Today is forecast to be WARMER than yesterday.

On top of all of that, I had a little breakdown last night. I'm thinking that it's like this- when you're in a plane and it starts to descend for a landing, you see such huge spaces of something like dreamscape. You can see from coast to coast practically, miles and miles and miles. Huge trees are nothing but a green smear, the longest highways but needles of silver. Towns a blurry emptiness of green. Then the plane gets closer to the ground and you can see individual buildings and roads and cars and eventually, people, who look like the tiniest and most insignificant of insects.
You, however, are still part of the plane, in the sky, a casual observer, a flyer-over.
Then. Landing. The awful noise, the violent shaking of the metal craft which holds your life, the screech and feeling of death being imminent as this huge metal skybird becomes an earth vehicle again and suddenly, all is in proper but disorienting perspective.
You deplane and people are people again and the earth is where you put your feet and everything that had been before landing is the dream. The places you've been, the reality you were living up until a few hours/moments ago, all of that is now a dream and the reality is lines of people, shouting into their phones (I have cankles! screams a woman to someone, somewhere, as she stands in line waiting to have her passport checked and of course you have to look- cankles? yes, she has them) and your mind turns to getting out of the airport, on with your life, the hurdles you must cross before that happens- baggage claim, customs- and it's too sudden, too real, all of it, but it is what it is.

So. I came back from Cuba and it's taken me a while to actually land. My mind has been there while all of this has been going on and last night I believe the wheels of the plane actually dropped and I was delivered back fully and finally into this life, the telling of it done. The meaning of it parsed to pieces. The pictures of it shared. The chemicals in my body which had been secreted for days and days and days suddenly with no place to go, nothing to deal with, everything come to a literal screeching halt and I was hot and tired and looking around with the eyes of a traveler who wonders, Really? this is where I live? This is my beautiful life?

A Fictional Tale Of Morning Reality:

A woman, let's call her Lloydita, who is in a bad mood already, stops by the post office where she runs into a woman she has known for a very long time and whom she has never, ever liked, not one bit, and even less after she discovered that this woman had been one of her ex-husband's sluts du jour when she'd been married to him. The woman had always been unctuous and slimy and overly friendly and familiar. She'd always left Lloydita feeling as she needed to shower in hot water, thoroughly and with Dr. Bronner's peppermint soap. Undiluted.
Rinse. Repeat.
Again.
And so when Lloydita sees this woman in the post office, her heart sinks. She is already in a bad mood, hot and soul-ugly. Now this. She pretends she doesn't notice her which is ridiculous. The post office is the size of a special-issue postage stamp and could be spit across by a six-year old boy missing his front teeth and Lloydita wishes she had one of those boys (she happens to know one) with her to do that. To spit.
But she doesn't and when she bends to the little dials on her post box, the woman says, "Hey Lloydita!"
And so Lloydita must turn and greet her, which she does with completely unenthusiastic politeness and the woman wants to talk.
Not just blah, blah, blah talk about heat or humidity as a civilized person would do. No. She wants to talk about the EX.
Does she realize, Lloydita thinks, that I know she slept with my husband? That she did this when I was at home with our two little children?
Perhaps she does and doesn't care. Perhaps she does and thinks that all of that was so long ago (which it was) that it couldn't possibly have any meaning left, any power to wound or prick or stab or cause to bleed. Perhaps she does and doesn't understand that Lloydita is filled with a sort of dull, universal and undirected hatred this morning and needs a vessel (thanks, Elizabeth) in which to put and hold that hatred. A place in which to drop that dense, small chunk of dangerous emotion and there it is- standing before her! Way too close to her, in fact.
The woman has no more sense of personal space than she does of appropriateness or of shame.
She is friends with the EX on Facebook and she begins to discuss the EX's current travels, etc, and wants to know details about this and that in his life, like a teenage girl with a crush who has an overwhelming need to speak of her beloved continuously. She even begins to discuss the children which Lloydita had with this man, as if she had any right to discuss them, to even let their names be held for a second in that mouth, and Lloydita's anger grows until she becomes rude which is a far cry from what she wants to do which is to curse the woman, out loud and at last, after all of these years but, in fact, the urge to just get away from the slime, the ooze of fawning oiliness wins and she steps away from the woman and utters a closing to the conversation and is gone out of the door and into her car and away, away, away to home and she tries to remember that this woman, this repository for all of the ugliness in herself today has had a hard, hard life but it doesn't help much, no, in fact, it doesn't help at all. 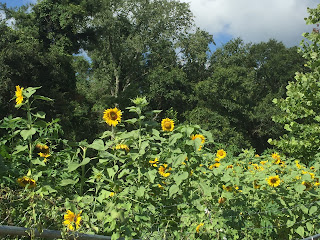 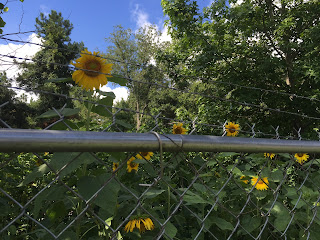 So. In reality, here I am and do you see those sunflowers? When I went to take the trash to the garbage place this morning, I saw them growing behind the fence, the chainlink fence topped by two strands of barbed wire. I was stunned and amazed.
"Who planted those beautiful sunflowers?" I asked the tiny woman who works there in the stink and filth and god awful, unbelievable heat.
"I did," she said.
"I pulled all those tall weeds and I planted those. It's the only thing that brings me pleasure here."

And I stood in awe of her, as I do anyway because she always has a smile and is eager to help if help is needed and works so hard that she puts the men who work there to shame.

Another emotion to throw into this churning pot of feelings in my head today.

A fucking lesson, should I care to take it.

I've had an interesting life and it has held ugliness in it and that ugliness is as real as barbed wire and still holds as much power to tear at flesh, but I can plant flowers behind it, in front of it.
Should I choose to do so, now that I am back on solid ground, the sky above me only a dream of a place, limitless and untouchable, beautiful and hot, thinner and thinner the farther you go.